An evening at Ametsa is like going on a culinary odyssey though Spain’s Basque country. Ready for a journey? Then read my Ametsa review first!

One of the reasons I travel so much is for the food. I love nothing more than learning all about a country and a culture than through its cuisine. I mean, who doesn’t, right?

Well, an evening at Ametsa with Arsak Instruction is like going on a culinary odyssey through Spain’s Basque country. This is a true celebration of Spanish cooking with really interesting and complex flavour combinations – we even had some glorious Spring sunshine to go along with it too.

From the slow-cooked egg with the most delicious Iberico consommé I’ve ever had to the flakey hake with crispy brown onion skin, the food at Ametsa is unlike anything else I’ve had before. At times it’s challenging – it’s far from bland and boring – but that’s the whole point.

And with a name that translates to ‘dream’ in Spanish, each dish was like a piece of art, almost to pretty to eat. Almost… 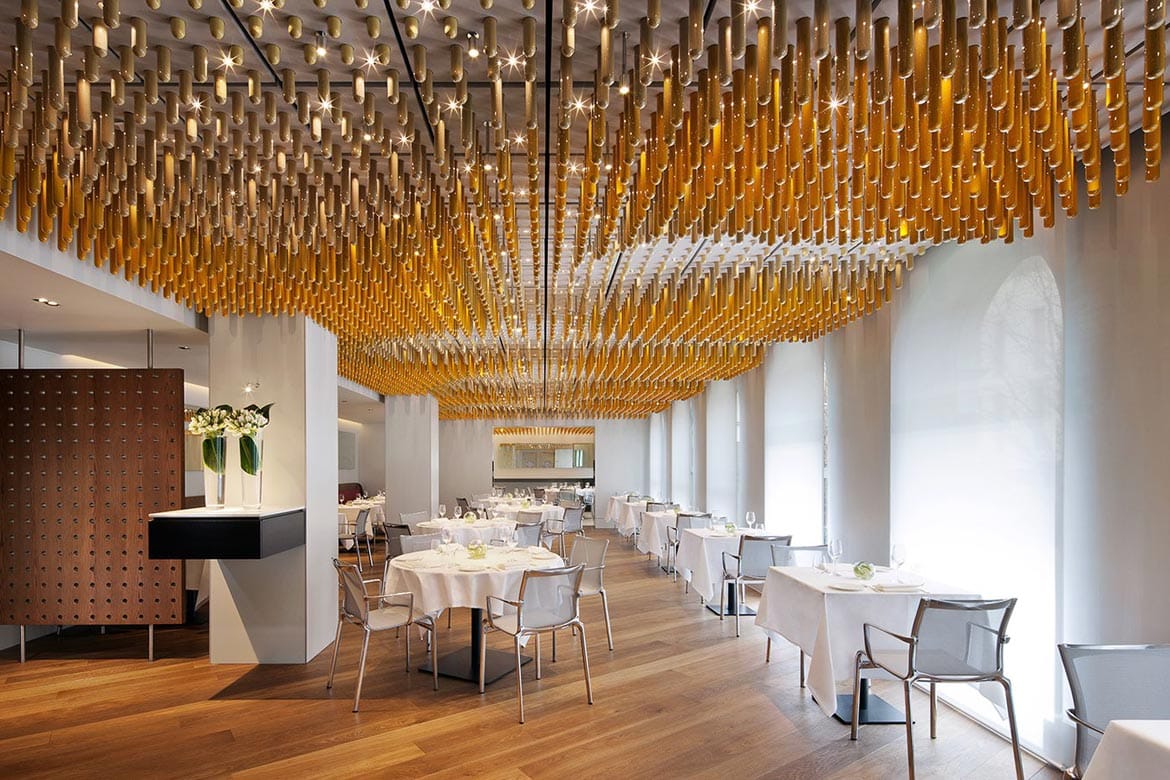 The main dining room at Ametsa

Now this is something that I plan on doing only once, but Chloe and I recently got engaged (yay!)

After being in Thailand for a couple of weeks eating all the rice and noodles, I really wanted to treat Chloe to a special meal in London to celebrate our engagement. So much of our relationship is built around food so I really wanted a place that we’d remember for years to come.

It wasn’t until I jumped on Bookatable to see what deals they had that I came across Ametsa with Arzak Instruction.

Arzak, the 3* Michelin restaurant in Spain, is a place we’ve wanted to eat at for a couple of years now (we have a very long list of places we’d like to eat at!)

Considering I couldn’t take her to San Sebastian for it, this seemed like the next best thing. 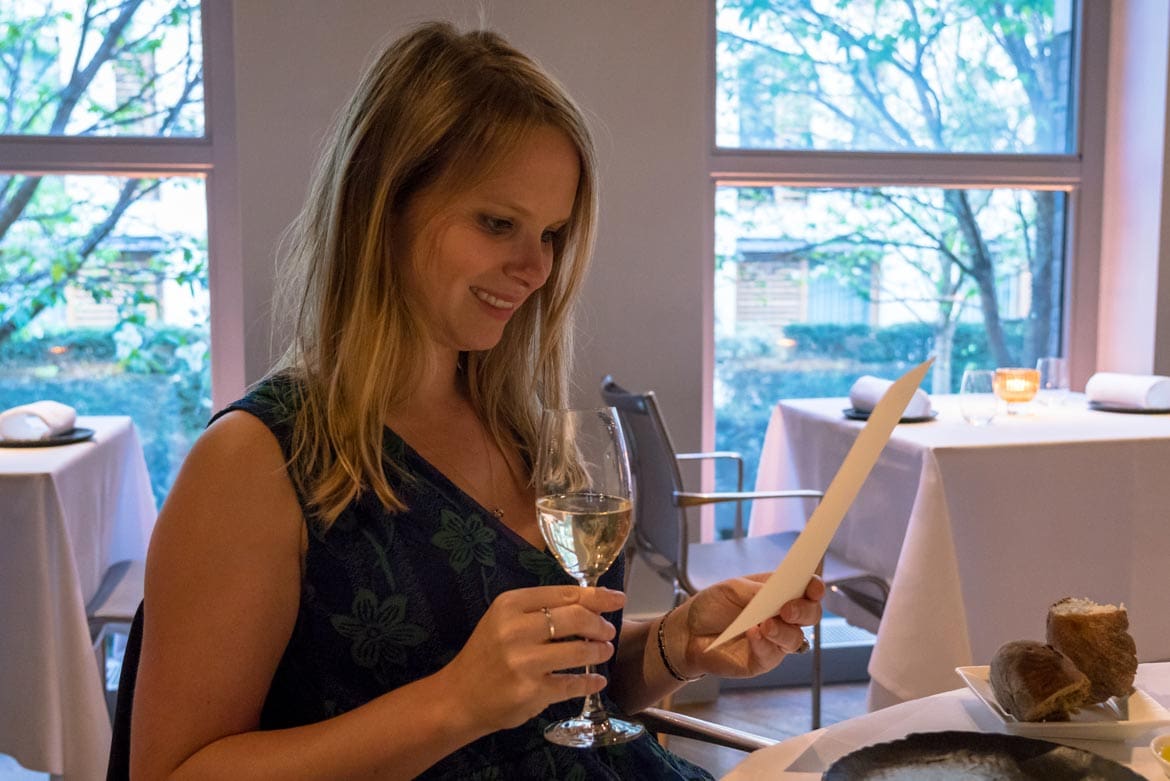 Chloe & I were celebrating our engagement so we wanted to go somewhere special!

Ametsa is the restaurant at the back of COMO the Halkin hotel in Belgravia, a beautiful 5* hotel just around the corner from Hyde Park in London.

One of the reasons I was so attracted to this place was the name. There’s no doubt that anything with the name Arzak in the title has huge pulling power.

Arzak is the brain child of Juan Mari Arzak and his daughter Elena, and the 3* Michelin restaurant is widely regarded as one of the best in the world. If only they could sprinkle a little of that magic on Ametsa then it’d be well worth it.

To say we were excited was an understatement. 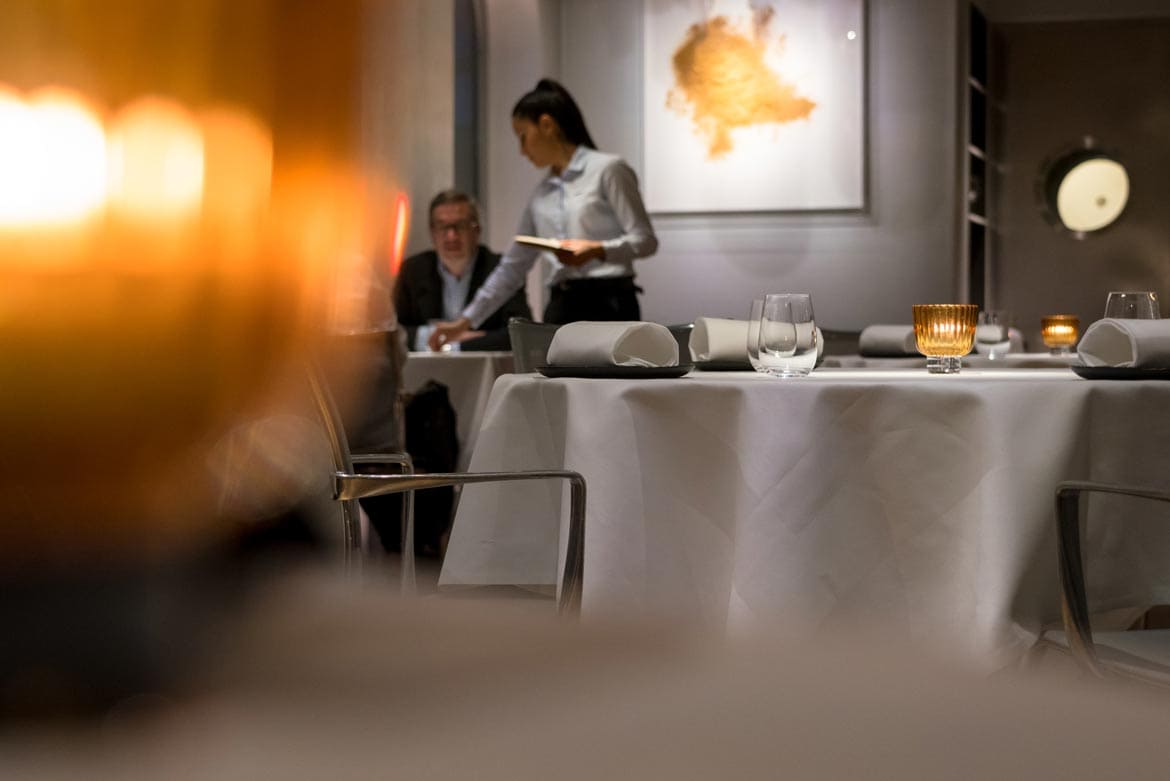 The atmosphere was very chilled and relaxing

As soon I walked into the restaurant the first thing I noticed was the ceiling. This is a wave of yellows, oranges and reds made up of 7,000 test tubes filled with the spices of Spain. It really sets the tone that this all about tastes and flavours of Spain.

We went for the 6-course tasting menu and the food was among some of the most interesting I’ve had in a very long time.

Course 1 – Crunchy black pudding and a sphere of mussels 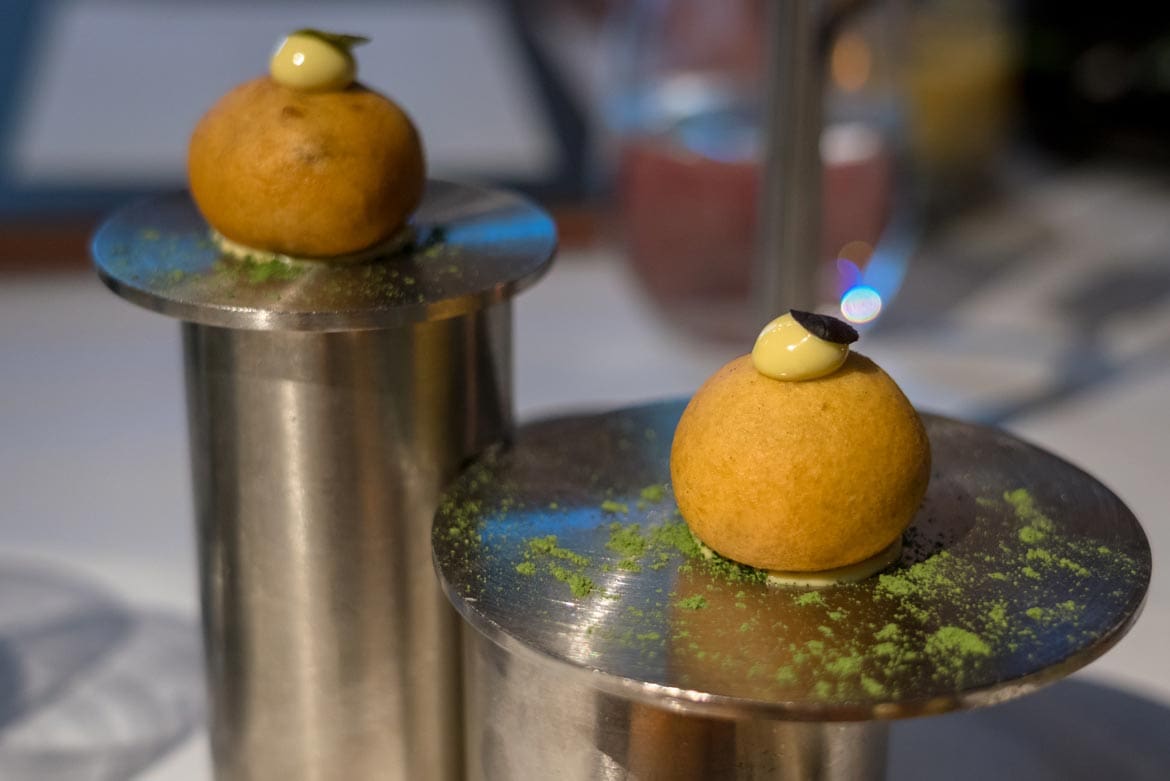 Course 1 – Crunchy black pudding and a sphere of mussels

Even though only 2 aperitivos were listed, 5 dishes came out to kick off our banquet. There was a squid ink cracker with a sep soup, a scorpion fishcake wrapped in Angel hair pastry, a mussel battered a fried, Iberico ham with a citrus mash on a plantain crisp and a delicious black pudding ball with a sweet orange marmalade that was almost like having a truffle for dessert.

These are all a list of ingredients though. What you miss out on is the flavours and textures, the little details that make this such an amazing start to the meal.

For me, the sphere of mussel was favourite morsel in front of me. It was the taste of the sea ensconced in this light batter and it was just delicious.

Also, an immediate way to make anyone happy. Under sell, over deliver. 2 dishes on the menu, 5 come out. That’s value for money right there. 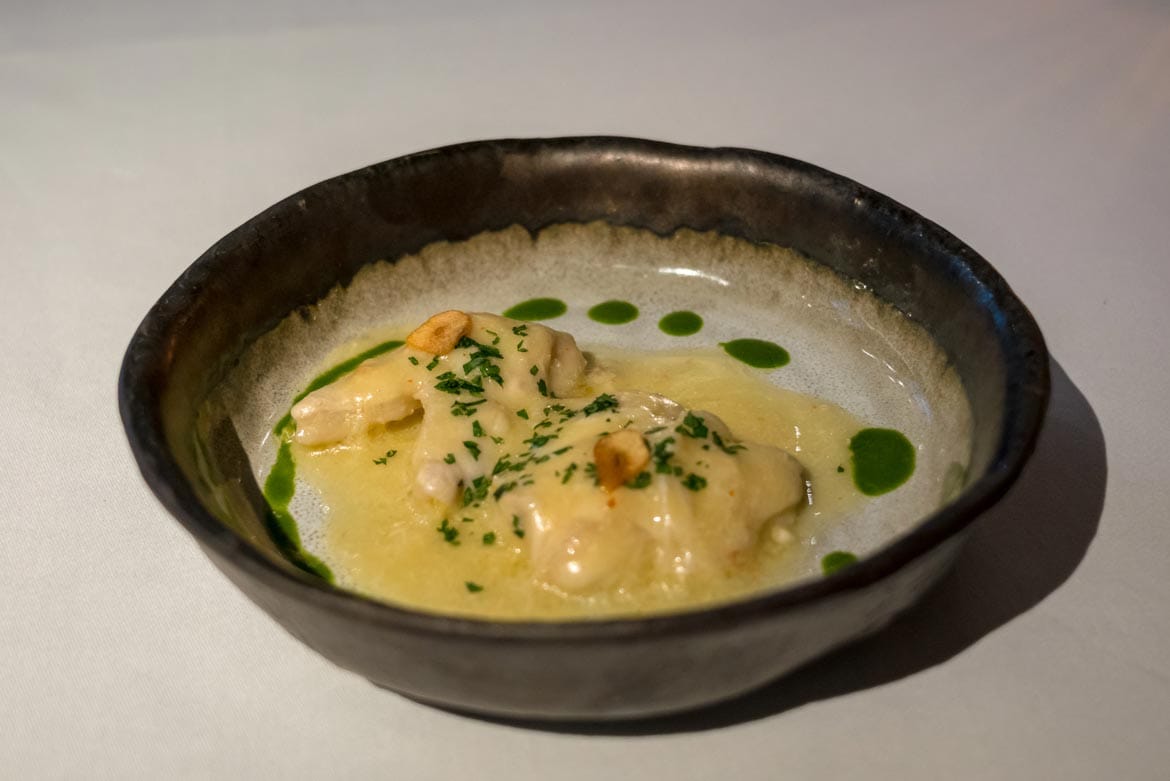 The name kokotxa pil pil gives nothing away but this was cod’s cheek in a cheesy garlicy sauce and dots of parsley oil.

I always find cod’s cheek surprisingly sweet but this was beautifully balanced with the slightly salty cheese and crispy bits of burnt garlic.

One of the things I loved about this dish was how tender the cod’s cheek were, though Chloe and I agreed with was probably the weakest dish on the menu. 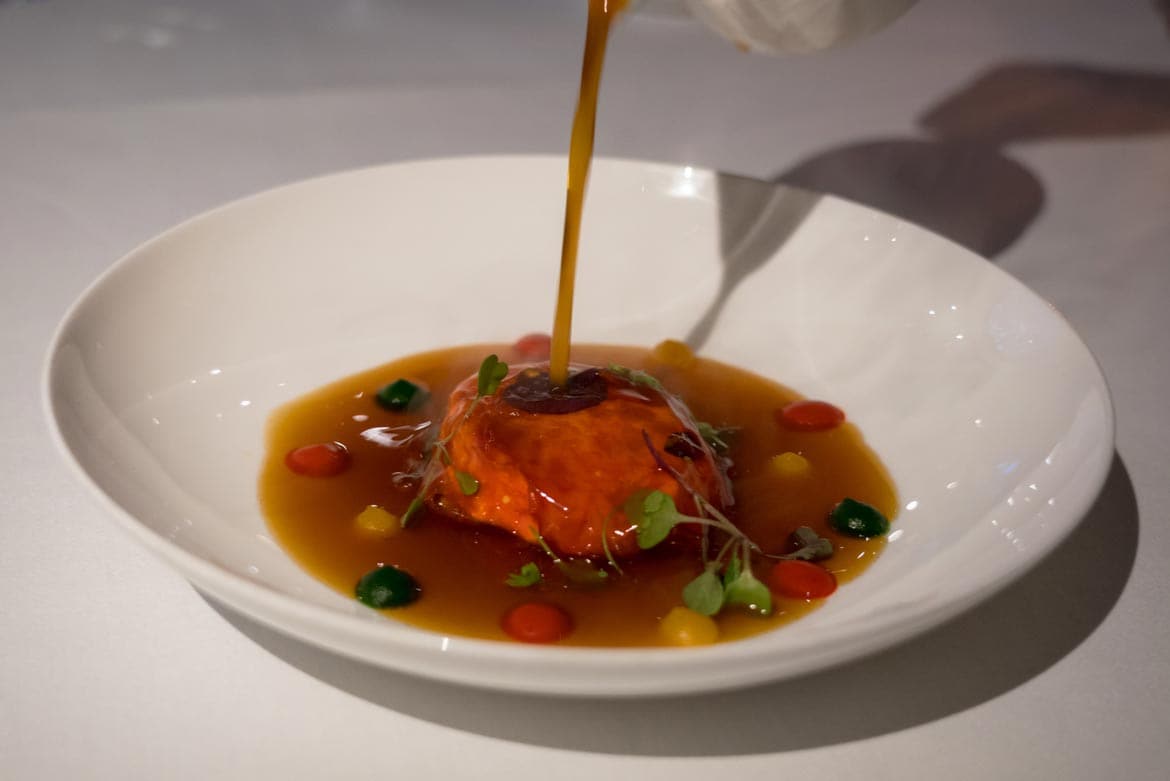 Egg on the moon, take a bow sunshine. This was by far my favourite dish at Ametsa.

Another name that gives nothing away, the egg on the moon was a slow-cooked egg in the centre of the plate with dots of roasted red pepper and apricot puree orbiting around it.

Then, at the table, the most incredible Iberico consommé was poured on top. One cut into the egg and the oozy yolk gave everything a velvety texture. This is as good as it gets and the flavour combination just worked so so so well.

I could’ve had a pint of consommé on the side it was that good. 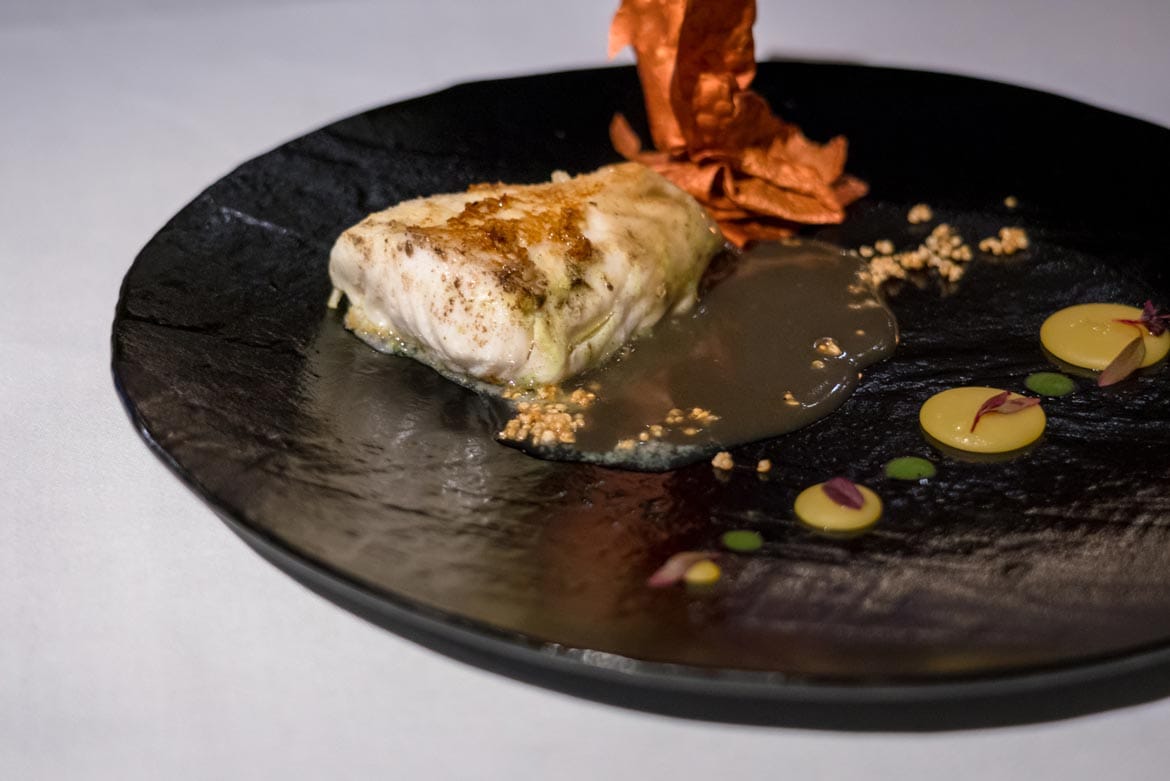 When this dish arrived at the table I couldn’t quite work it out. Next to the fish was a golden shard of paper that resembled gold leaf. It was only when I tasted it that this was the bronze onion, the perfect complement to the meaty hake.

Chloe and I had a lot of fun pulling apart the bronze onion skin and trying to work out how they made it. Also, there was a slightly salty crust on the hake that was really moreish. However, I felt this dish was more texture than flavour. For me, I would’ve like a little citrus or pickle on the plate to add a different level, but that’s me! 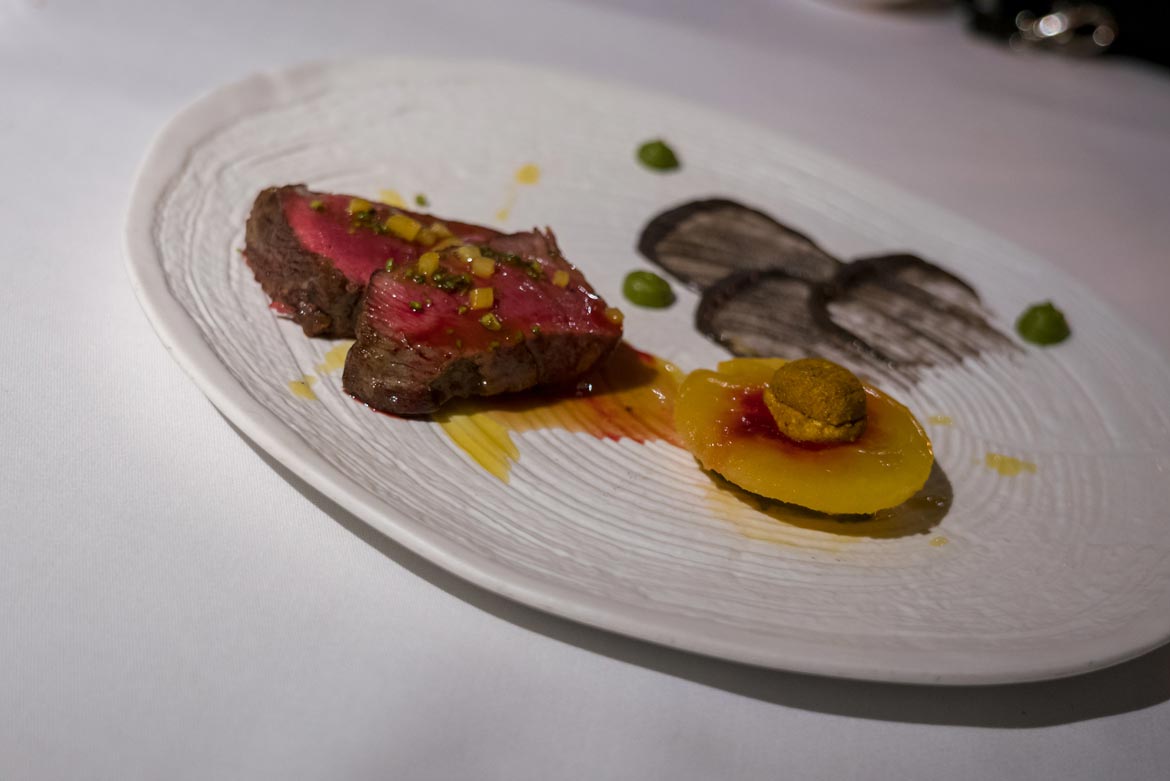 As this plate was put in front of me our waitress said “try and work out what the clumsy peach is. And here’s a hint – it’s not a peach!” Well they fooled me because this looked just like a peach. It even had the stone in the middle!

I won’t tell you what it is because it’ll ruin the fun but I will say this – if you’ve never had Iberian Presa before it’ll change your world. This is a cut of pork that’s cooked rare like a steak and it is so full of flavour. I know a lot of people think pork is tasteless. Try this and it’ll change your mind forever.

Also on the plate was a rich pistachio and orange puree and a salty pistachio sauce that was poured over the hake. I said the flavour combinations were interesting here didn’t I!? 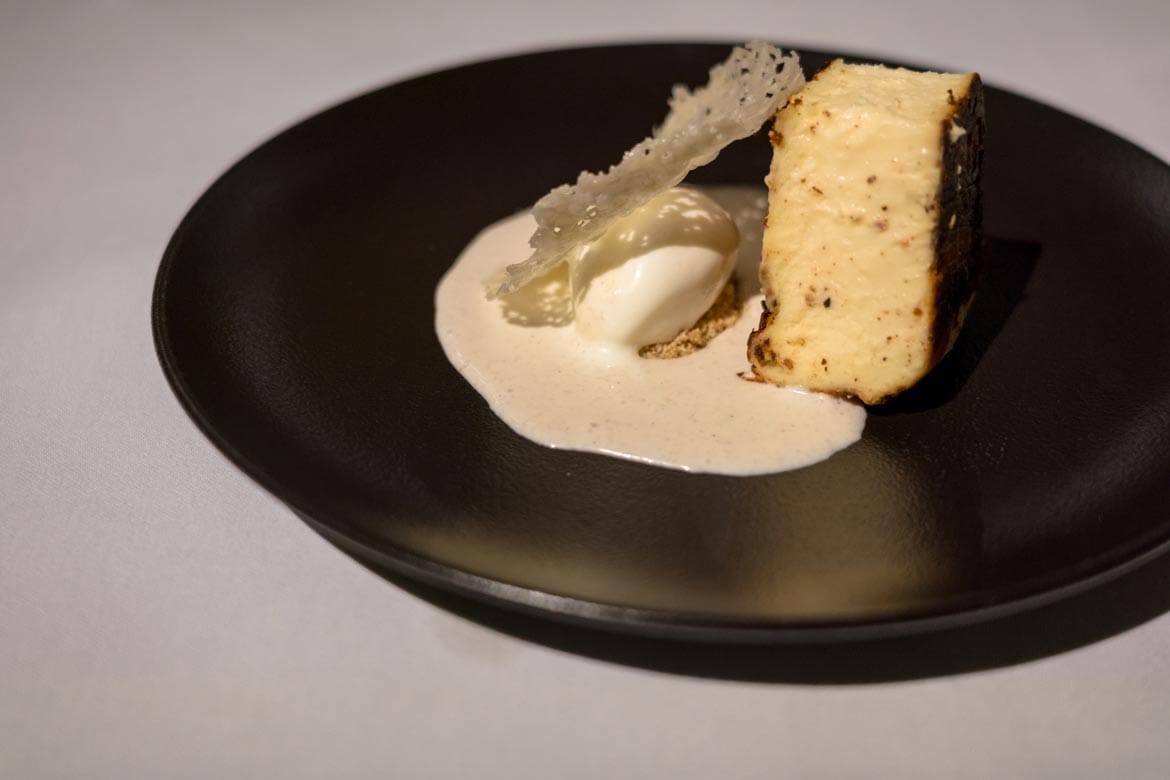 By this point we realised this wasn’t going to be a plate of cheese. Instead it was something in-between – not quite sweet dessert and not quite a rich cheese course.

I actually felt this dish summed up Ametsa perfectly. Even though I didn’t like it that much (I would’ve preferred an actualy plate of cheese!), it was by far the most interesting dish on the menu and it really challenges your taste buds in a good way.

As I said, I don’t want my food to be boring and this is far from that. 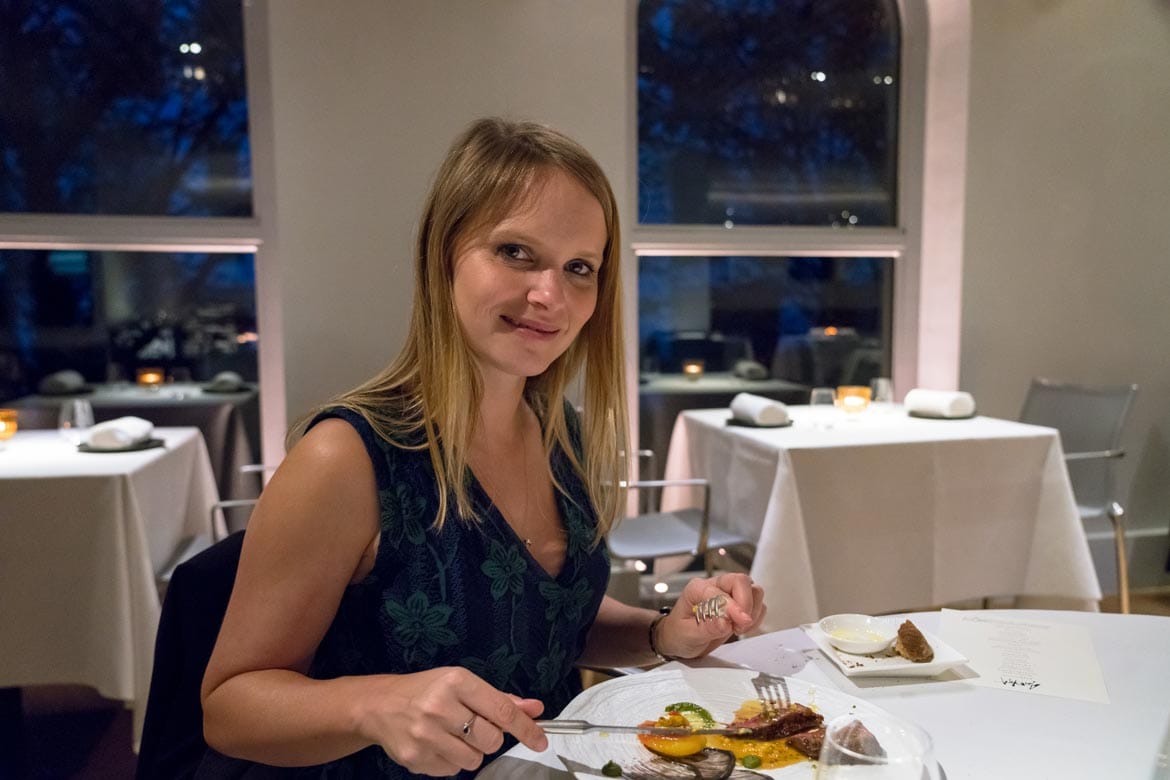 Ametsa was everything we wanted it to be!

What is the price of Ametsa with Arzak Instruction?

I found a deal on Booktable on their Feast on London Festival. This was £50 for a 6-course tasting menu and glass of red or white wine included.

Once again I thought it was such good value for money, especially when you consider how many different dishes you get for that price.

There are a number of different menus on offer at Ametsa Restaurant.

One thing I would say is always check the website. I’ve noticed there are a few deals on Bookatable so it’s always best to check there first to see what offers are on at the moment.

Would you like to eat at Ametsa with Arzak Instruction? Let me know in the comments below! 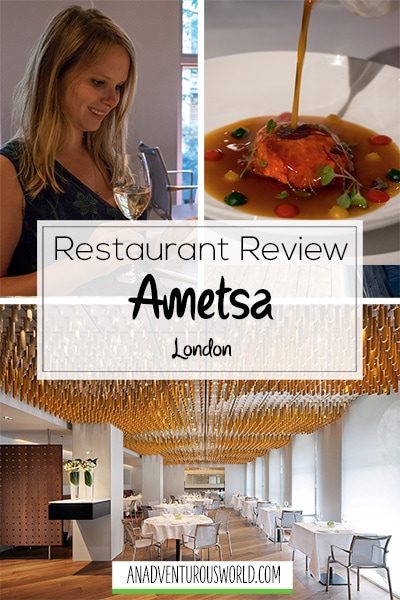