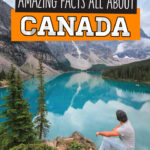 What do polar bear jails, maple syrup heists, low gravity, and UFO landing sites have in common? You’ll find them all in these fun facts about Canada!

Canada is an amazing place and a country I absolutely adore. Honestly, I have so much time for this jewel in North America. From the mountains in British Columbia and island life of Prince Edward Island, there is so much of this massive country to enjoy.

This gorgeous country has a diverse landscape, incredible nature, friendly locals and the almost the entire world’s supply of maple syrup.

With all of this, as you can imagine, there are a whole ton of fun facts about Canada!

Canada is the second largest country in the world, but aside from being large, what Canada is known for?

Well, the titles of longest coastline, largest maple syrup producer, most accessible polar bear population, and the most multicultural city all go to Canada. There is also the glorious fact that the biggest heist in Canadian history has to do with maple syrup. As they say, only in Canada.

There are also some really interesting facts about Manitoba, especially to do with the wildlife that call this province home! I won’t give too much away here, but the words snake pits are definitely mentioned.

So, what is Canada known for? Keep on reading to find out – I think these Canadian facts will really surprise you!

As you are probably aware, Canada is a huge country. It is almost the biggest country in the world, second only to Russia. To put this into perspective, Canada is larger than the entire European Union put together. In fact, it’s so big it has 6 time zones!

With a population of 38 million, Canada has just 4 residents per square km, making it one of the world’s least densely populated countries. Talk about room to move around!

With its large size and small population, Canada is largely unpopulated. In fact, one of the fun facts about Canada is that around 90% of its population are living within 160km of the main United States border.

These two North American neighbours share over 8,800km of borders, which makes it the world’s largest unprotected border.

Stretching out for over 200,000km, Canada’s coastline is the longest in the world. That being said, it’s definitely not the first place that springs to mind for a beach holiday.

It has been calculated that to walk the entire coastline would take you 4.5 years, not including time to sleep or rest. Better plan for 7 years if you’re attempting this one.

Canada has two official languages, English and French. In fact, did you know that Canada has the second highest number of native French speakers in the world, second only to France?

To maintain this French speaking tradition, in Quebec there are regulations in place ensuring businesses and establishments continue to conduct business in French.

One of my favourite French speaking cities in Canada is Montreal. If you’re heading here, then check out my guide to Montreal!

Each year on July 1st, Canadians come together to celebrate the anniversary of the Canadian confederation passing the constitution act in 1867. The day is commemorated with carnivals, parades, concerts, and of course, pancakes!

It is common in Quebec for 1 year rental leases to begin on July 1st. Because of this many people spend the day moving, giving the date the unofficial second title of moving day.

What is Canada known for when it comes to condiments? Maple Syrup! Sometimes referred to as liquid gold, this sweet tree sap based syrup is loved across the world.

Canada produced over 62 million litres in 2020 alone, and over 70% of that came just from Quebec. Considering that per season each tree produces enough sap to make about 0.5-1.5L of maple syrup, that’s a whole lot of maple trees!

One of my favourite fun facts about Canada is that the most valuable heist in Canadian history is the Great Canadian Maple Syrup Heist.

Over a series of months in 2011-12 the group of thieves took almost 10,000 barrels of maple syrup, which had a value of over 18 million Canadian dollars. Liquid gold indeed!

Sticking to the subject of food, what is Canada known for primarily when it comes to food? Poutine! These are chips covered with cheese and gravy.

However, did you know that Canadians also created a lot of the everyday products you consume? Peanut butter, canola oil, Hawaiian pizza, ginger ale, chewing gum, and instant mash are all Canadian creations. All I can say is thank you Canada.

Did you know that Santa lives in Canada and has a Canadian postcode? In 2012 the Immigration Minister of Canada made a declaration that Santa Claus was a Canadian, and as of 2013, he and Mrs Claus even have Canadian passports! Should you wish to write to them, their North Pole post code is H0H 0H0.

10. Diversity at its finest

While the capital city of Canada is Ottowa, Toronto is the largest city in the country with a metro population that is 4.8 times larger than the capital.

Toronto is the most multicultural city in the world, with people from over 250 different ethnicities living in the city. From Korea Town to Little India, each area of Toronto embodies a distinct culture. Imagine the dining opportunities!

When it comes to Canadian sports, ice hockey and lacrosse reign supreme. Ice hockey is considered to have originated in Canada, and it is a national institution. It is also the country’s official winter sport.

Lacrosse, which is said to be the earliest organised sport in North America, is Canada’s official summer sport.

Did you know that Canada is the only country outside of the USA to have a team in the National Basketball Association? Their single team, the Toronto Raptors, have been playing in the league since 1995.

Originally there was a second Canadian based team, the Vancouver Grizzlies, but they have since moved to Memphis, USA.

Quebec was founded in 1608, and was the first city in Canada that was established with the intention of it becoming a permanent settlement.

Not only is Quebec City is the only truly walled city in North America, it was actually also one of the last walled cities to be erected worldwide. On top of this, it was the first UNESCO World Heritage Site in North America!

The name loonie came from the fact there is a loon, a type of bird, on the back of the 1 dollar coin. The toonie (also spelled twonie & twoonie) gets its name because it’s worth two loonies.

One of the most scarily interesting facts about Manitoba is that it has the highest concentration of snakes in the world! In particular, the red-sided garter snake.

Each winter tens of thousands of them gather together in specific dens to hibernate forming, you guessed it, snake pits. If this thought isn’t terrifying enough, around May they disperse en masse to live out the summer in the surrounding marshland.

While we’re on the subject of interesting facts about Manitoba, did you know that there is a town called Churchill in Manitoba that has the most accessible polar bear population the world?

Each autumn the area becomes host to almost 1,000 wild polar bears who are waiting for the Hudson Bay to freeze. They even have a polar bear jail, for particularly troublesome bears to be kept until they can be relocated.

One of my favourite fun acts about Canada is that they are so welcoming that they have even created UFO landing site. Built in 1967 in St Paul, Alberta, this was the first of its kind to be constructed.

In their UFO tourist information centre you can also look at pictures of alleged UFOs, crop circles, and related incidents. The site also acts as a time capsule, to be opened in 2067.

The biggest national park in Canada, and second largest in the world, is Wood Buffalo National Park. The national park was established in 1922 in order to protect the free roaming bison that live in the area.

Spanning across parts of Alberta and the Northwest Territories, this national park is actually bigger than Switzerland!

If you’re looking for the best places to visit in Alberta in winter, then check out my post on where I recommend you visit.

One of the most unusual fun facts about Canada, is that at Hudson Bay there is less gravity than anywhere else on Earth. This anomaly was first discovered in the 1960s and has taken decades for scientists to understand.

Okay, it’s not quite as extreme as walking on the moon, and you definitely won’t float, but if you go to Hudson, you might feel a little lighter on your feet.

Not everything in Canada is huge! Measuring at just 225km long by 56 km wide, Prince Edward Island is the smallest province in Canada.

It’s the only province in Canada that does not share a land border and the residents refer to themselves as ‘islanders’. This comparatively tiny island, however, actually produces 25% of Canada’s potatoes!

So be honest, how many of these Canadian facts did you know? They’re all fascinating, right?