With the Shwedagon Pagoda at it’s heart, Yangon in Myanmar is a sensory feast for Buddhists and backpackers

I must have walked down the same streets in Yangon, Myanmar a hundred times in the few days I was there, and still, there was something new to look at every time.

Yangon was my first stop on this quick two week excursion to Myanmar; somewhere that was relatively new on my travel radar. 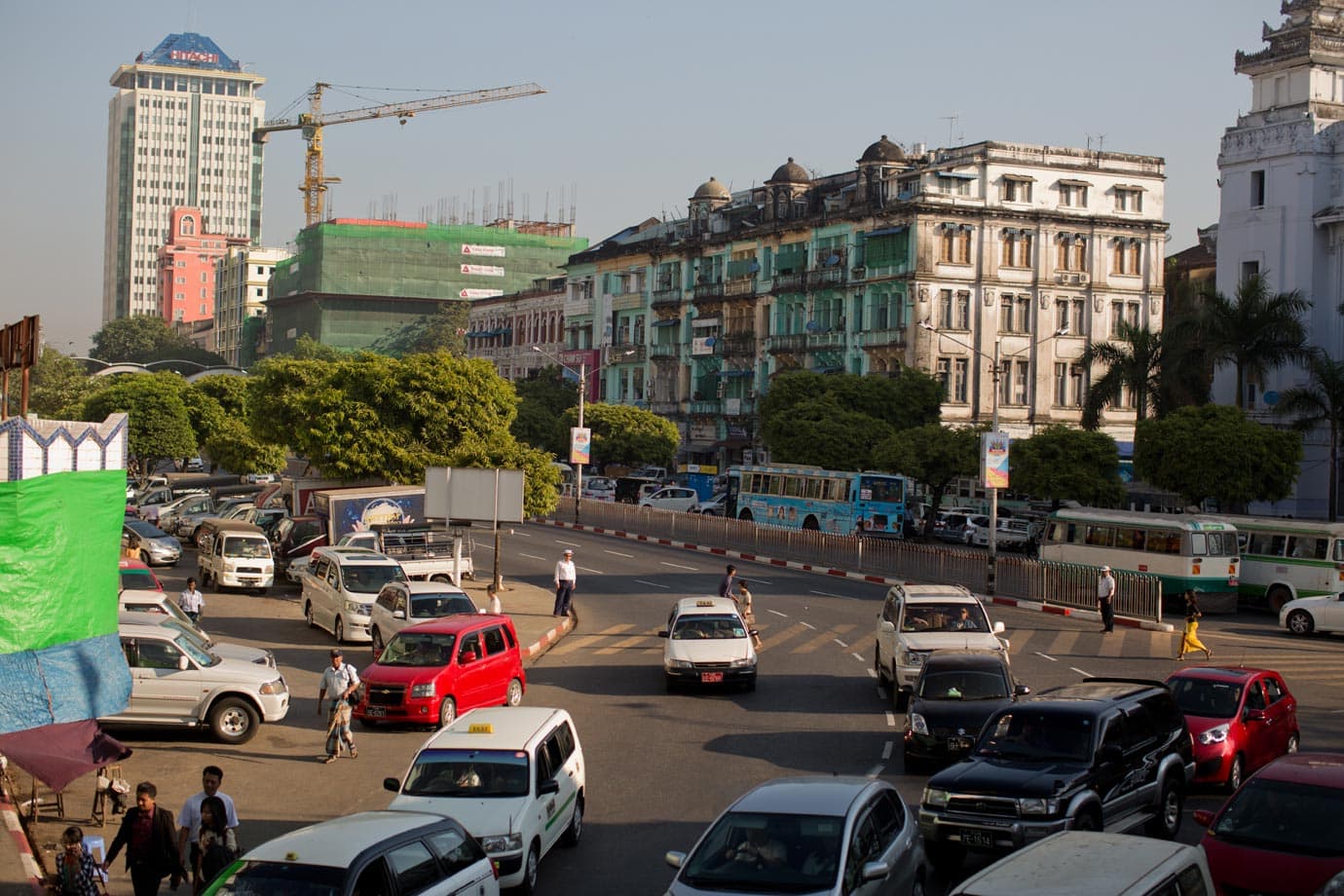 I stayed on 13th street, which meant walking 20 blocks or so through the market district to get to, what felt like, the centre of town and each time, back and forth, it was a sensory overload.

Pig intestines on one block, power saws on the next, there is always something happening in Yangon and while at first glance it may appear to be another busy city, one could spend weeks exploring and still find another layer.

Streets laid out in a grid and numbered? I was in heaven. I was able to navigate downtown without much trouble, and it was easily the best part about visiting: walking through crowded streets, vendors of every sort busily working away. 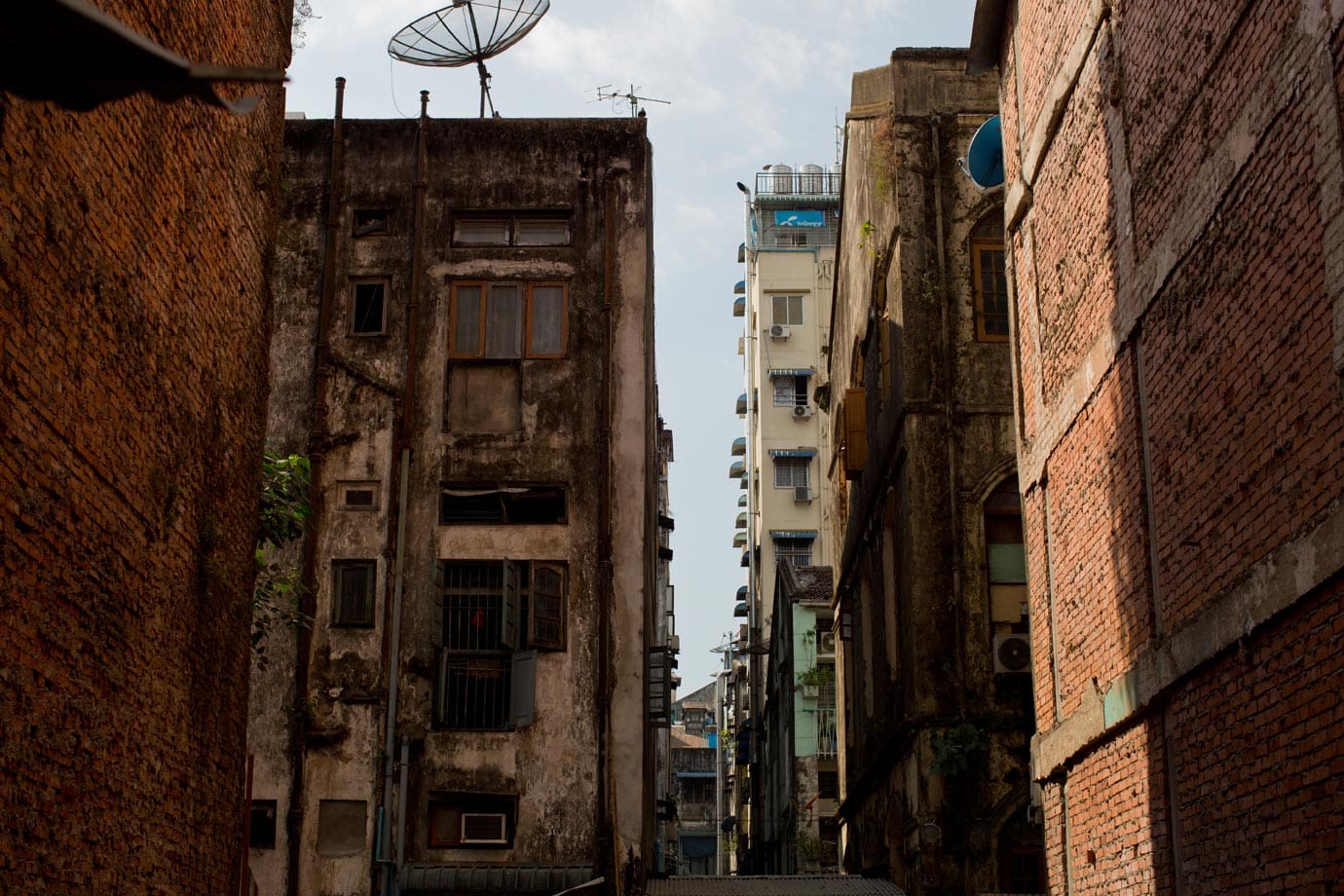 Being jet lagged on the first morning, meant waking up at dawn and seeing the city as everyone was starting their morning commute – my favourite part of any day in a new spot. With temperatures around 34 degrees celsius, the morning exploration is key.

Most people fly into Yangon, the largest city and former capital of Myanmar, which lies in Southern part of the country. It is a bustling city, with the Shwedagon Pagoda, as the main attraction for Burmese and international visitors. You will probably see thousands of pagodas in your visit to Myanmar, and this one is like the Taj Mahal of them all.

The pagoda itself is a glowing, golden beacon that you can see from all points of the city. It’s a about a 20 minute cab ride away from the downtown district (depending on traffic!) 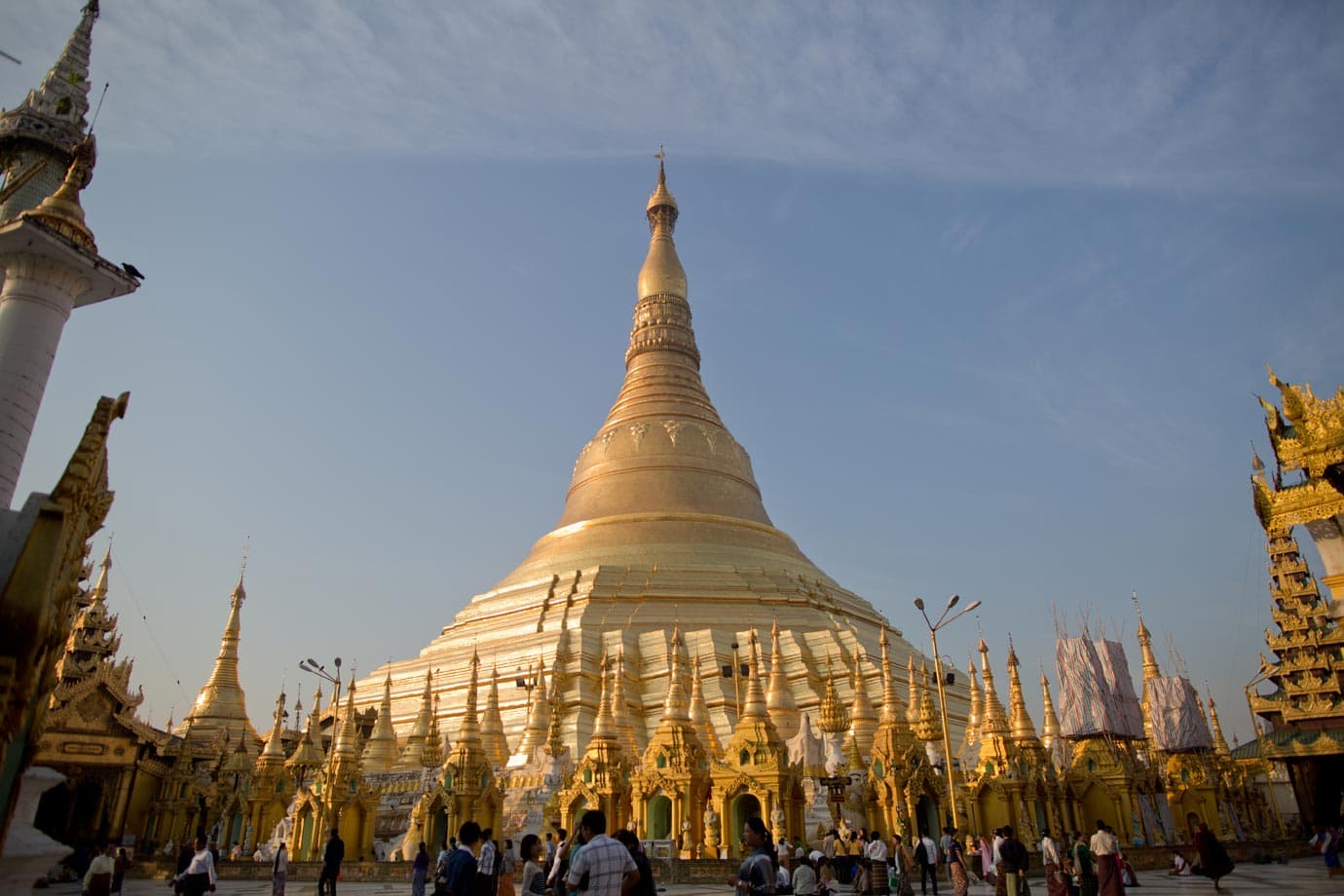 Foreign visitors pay a small fee to enter, and are given a booklet of information. If you’re like me, you will not look at the booklet, but rather stand back and watch in wonder the beauty and ritual of everything happening around you.

Thousands of Burmese come from all over to visit this highly religious site. It is believed that there are relics from past Buddha’s held within the pagoda, which is why it is deemed the most sacred site for Buddhists in Myanmar.

(Make sure you dress accordingly: women need to cover their shoulders and knees (no shorts) and men should also wear pants.)

The pagoda is a staggering 110 meters tall and I was most shocked to hear that there is a 72 karat diamond at highest point. Say what?! Sounds like a Nick Cage movie in the making. 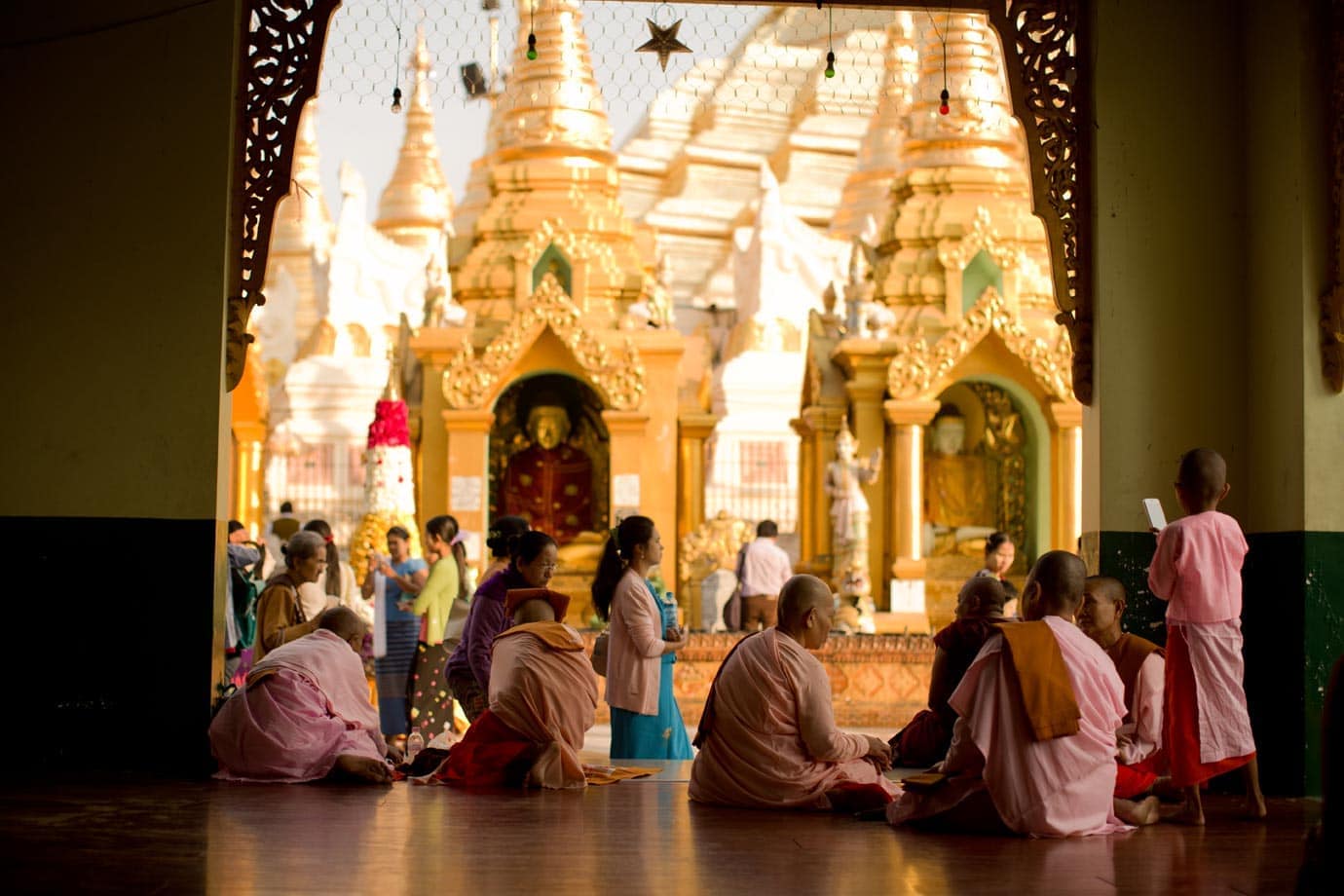 I visited in the early morning, because like most sites in Myanmar, I had heard that things get very crowded at sun down. It was a wonderful opportunity to explore all the nooks and cranies with different spiritual meaning, and people watch all the visitors coming for their photo op.

If you’re a real die-hard, the pagoda opens at 4am every morning (and closes at 10pm). 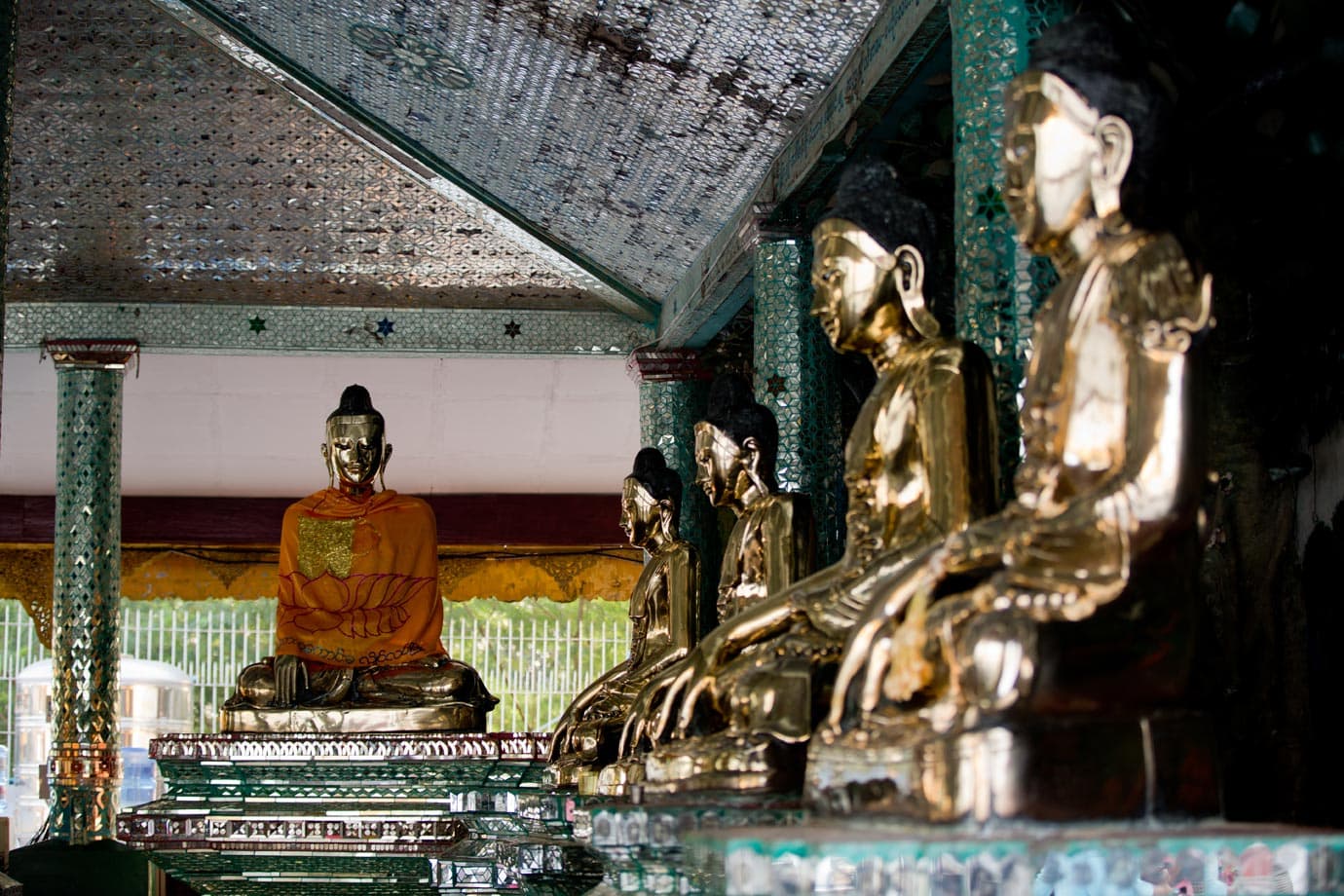 While strolling in Yangon, I also visited the Bogyoke Market which is a major tourist attraction. The building itself is full of shabby-chic character. It is colonial style, like many of the crumbling structures in Yangon.

The market, which is also a named historic site, contains what you would expect: trinkets, clothing, jewelry and art work – a good place to stop and buy gifts to bring home. 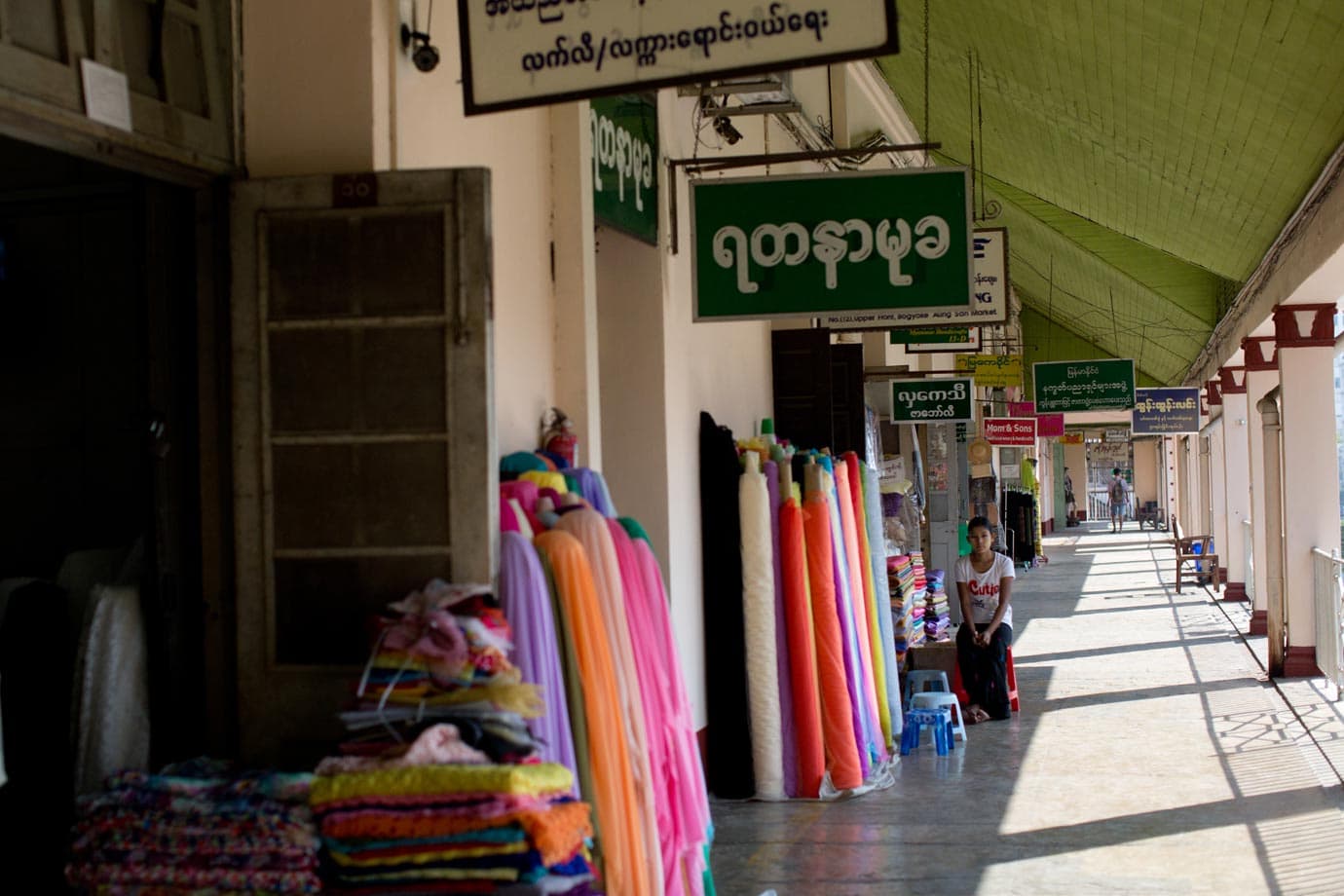 If you think the city is alive in the day, wait until the sun goes down and head to 19th street in Chinatown. This is where everyone heads to drink cheap beer (about 60 cents each!) and taste street food at it’s finest (or at least, at it’s greasiest).

If you head down there just before the sun goes down, you’ll be able to get a good seat right on the street where all the best people watching ensues. All the restaurants are lined along the street and it doesn’t really seem to matter which one you choose.

Hundreds of people jam the streets, food carts stroll by, young men in polos run back and forth across the streets bringing frothy drinks and cigarette packages. All of this is played to the tune of street musicians passing by and a never-ending chorus of “kissy” noises (this is how you call your server over).

It took me a while to get used to that, given that in my many years of waiting tables if someone had made a kissy noise to call me over I probably would have knocked their teeth out. But, when in Myanmar … 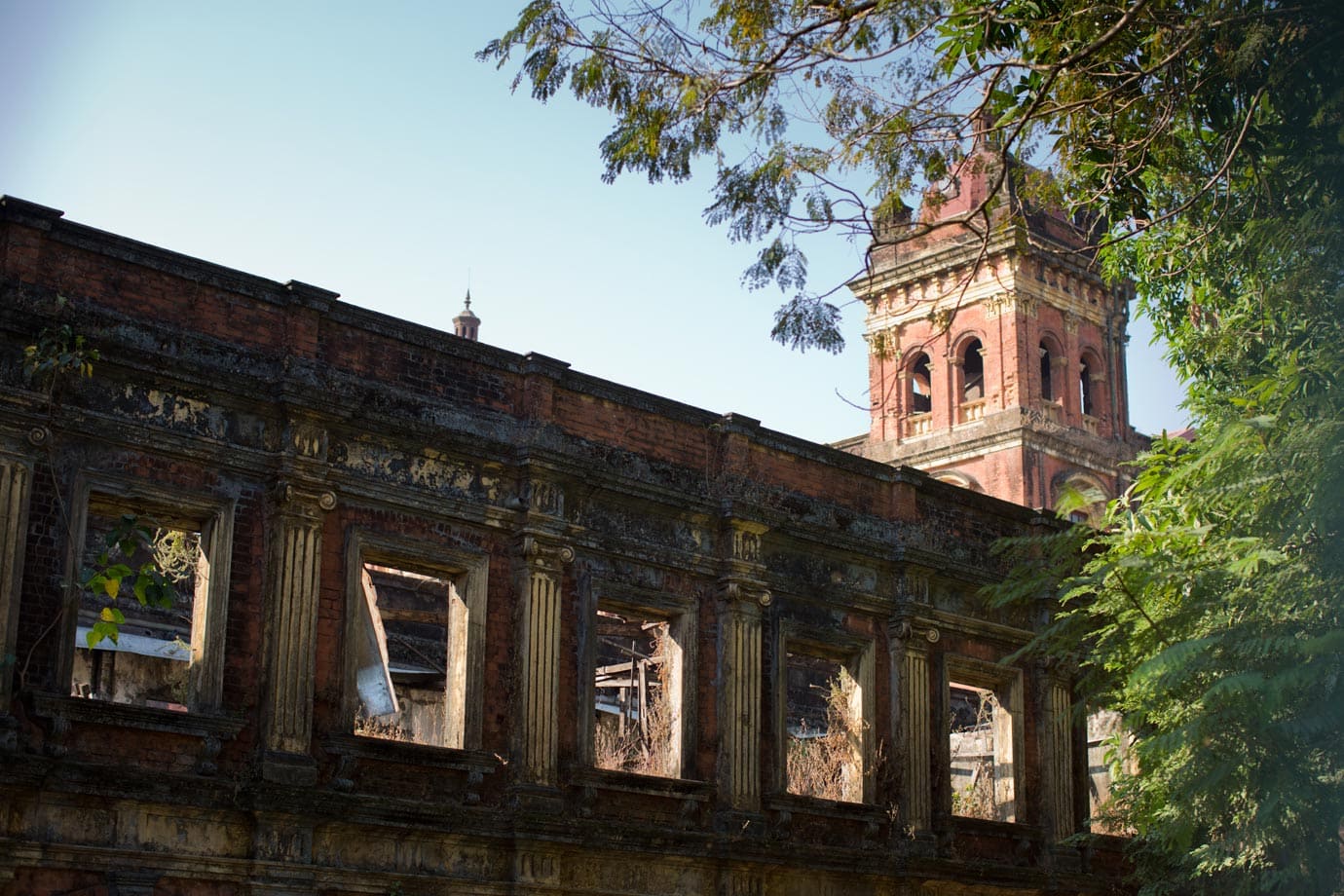 If you’re visiting Myanmar, you will most likely find yourself in Yangon and I highly recommend taking some time to wander through the streets with no destination. Of course, visit the Shwedagon Pagoda and many of the other pagodas dotted through the city.

But it’s in the wandering where you get to see the stunning contrasts in this industrious city. The crumbling colonial architecture framed with hundreds of cords running from building to building, the madness of traffic in the city streets to the serenity found within street-side pagodas. Take your time in Yangon and I promise, all your senses will thank you.

If you’re looking for an amazing Myanmar travel itinerary on where to go in Myanmar for two weeks then check out the link!

Great posts!Just got back from a longer trip around Myanmar and also enjoyed Yangon street life with the Shwedagon topping it all!Amazing vibes in that place, walked around it like 10 times :) Hope you will have some more posts coming from Myanmar, such an incredible country.

Hey Julian! It is a really special place, I agree. Lots more coming from my trip in Myanmar :) Thanks for reading!

Yangon was one of the first places I visited as a very inexperienced backpacker two years ago and it was such a culture shock! I went to all of the places you mention but my big mistake was trying to do everything in the afternoon when the heat was just unbearable. I'll never forget my visit to Shwedagon Pagoda and drinking too many Myanmar beers in Chinatown though. Thanks for sharing!

Thanks, Toni Marie! Isn't that the fun of backpacking? Hehe. Thanks for reading :)