The Mt Batur sunrise hike is a must on any trip to Bali! From how much it costs to what to wear, here’s everything you need to know about the Mt Batur hike! 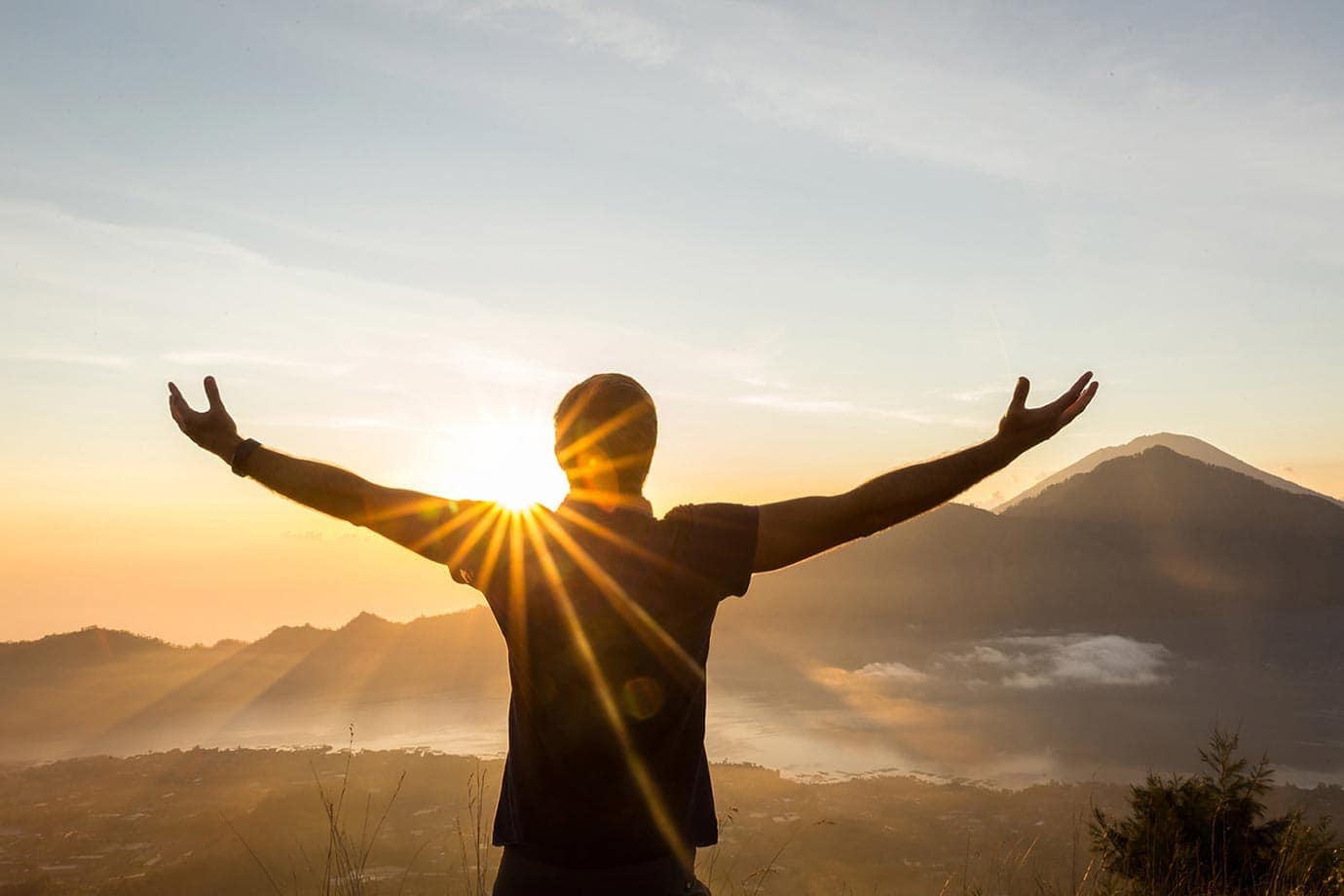 There was silence. At 6am, that might not be much of a surprise, but considering I’d just done the Mt Batur sunrise hike with dozens of other people, the silence was something you notice. It was a sign of respect.

Occasionally, someone would scrape their feet on the black volcanic gravel beneath them, and in the distance you could just hear panting as the next person conquered the volcano, grins plastered to their faces.

For everyone else, our eyes we firmly trained on the horizon.

As each minute went by, the outline of Mount Agung and Lake Batur in front of us became clearer and clearer as the sky turned from purple to pink or gold.

Then it happened, the moment we had all been waiting for.

The sun slowly crested from behind Mount Agung, golden sun spears bathing us all in light, the warmth instantly hitting our faces. I looked around and everyone was smiling. And there was still that silence.

As far as wake up calls go, climbing Mount Batur at sunrise was 100% worth it.

In fact, it was one of the best things I’ve done in a very long time. 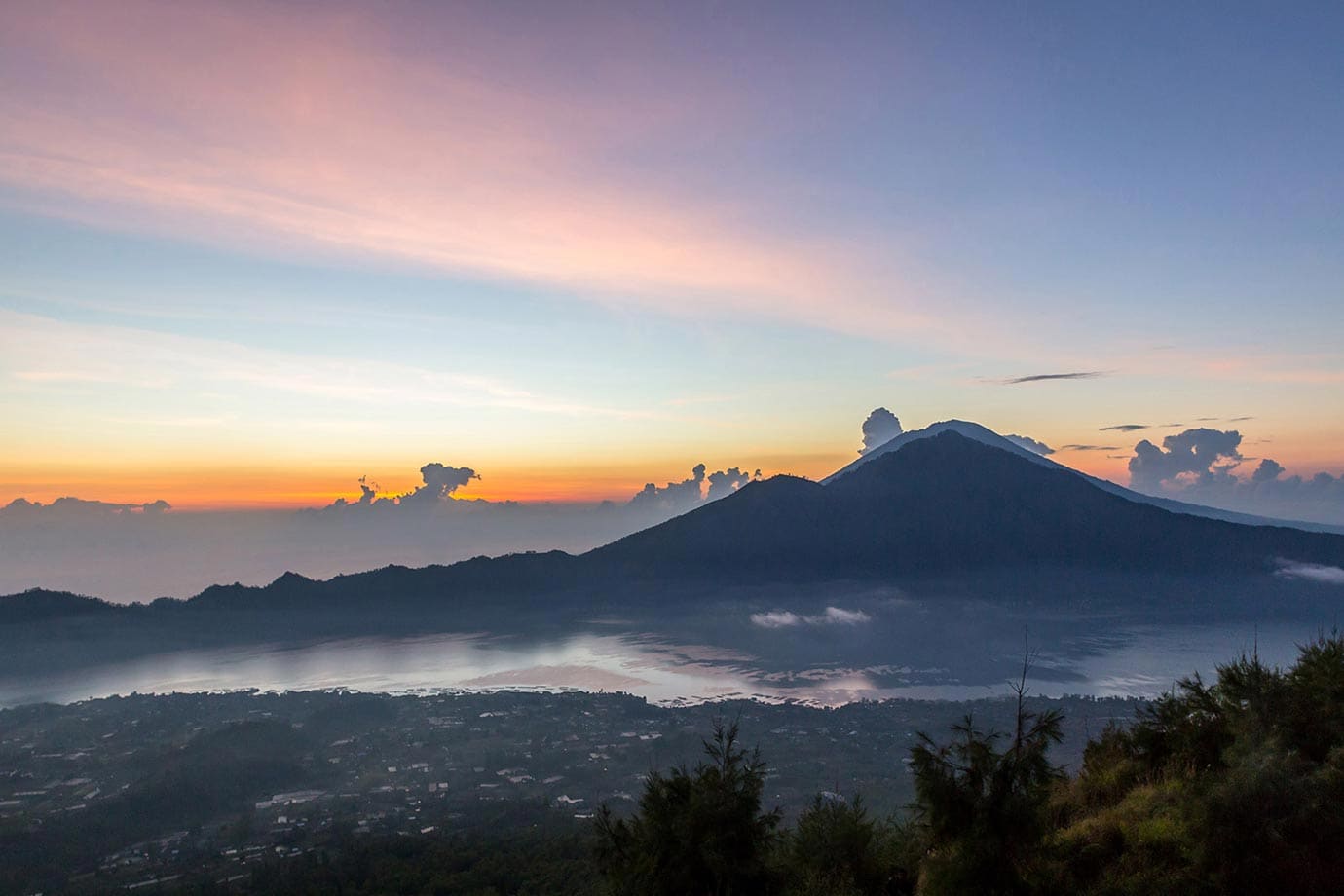 After doing my research, I booked my Mount Batur tour through GetYourGuide as everyone raved about them. This particular tour actually won an award as one of the best GetYourGuide tours in 2019, so you know it’s a good one!

This tour includes hotel pick up from Ubud (as well as a few other locations), and then your travel towards the active volcano near the village of Kintamani.

Unlike a lot of other tours, this one includes a visit to the coffee plantation in the village of Temen. Here you get to an insight into local life while drinking some of the best coffee in Indonesia.

Even though this is a little bit more expensive than some local tour operators, you get what you pay for. Also, only local guides are used so this is a responsible travel company.

What time does the Mount Batur hike start?

Rewind back to 2am and my alarm went off, pitch black outside.

I have to admit, I really don’t mind 2am wake up calls, especially when I’m doing something like hiking up an active volcano.

Like a lot of people doing the Mt Batur sunrise hike that day, we were staying in Ubud. At 2:30am, exactly on the minute, our tour turned up at our hotel to pick us up. I think it took about an hour to drive to Mount Batur but I was half asleep. I wish I could say I used that time wisely and I slept for an hour but I was just too excited! 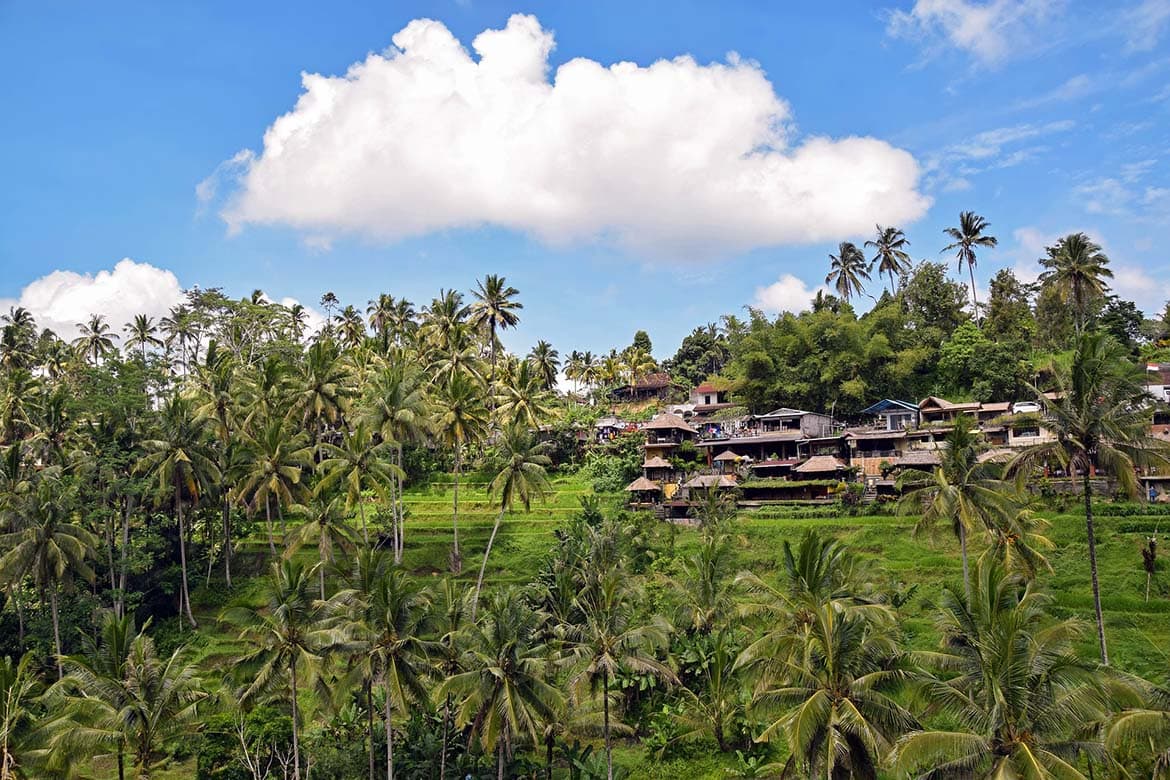 At around 3:30am we arrived at Bali Sunrise Villa for some much-needed coffee and a couple of energy bars. If there was one thing that was going to help me through the morning it was coffee!

All food and coffee is included in the tour price which is great, so you don’t need to worry about paying for things.

Like everyone else in the room on our sunrise trekking tour, I was nervous. That goes without saying. But it’s that nervous excitement when you know know you’re about to do something incredible. 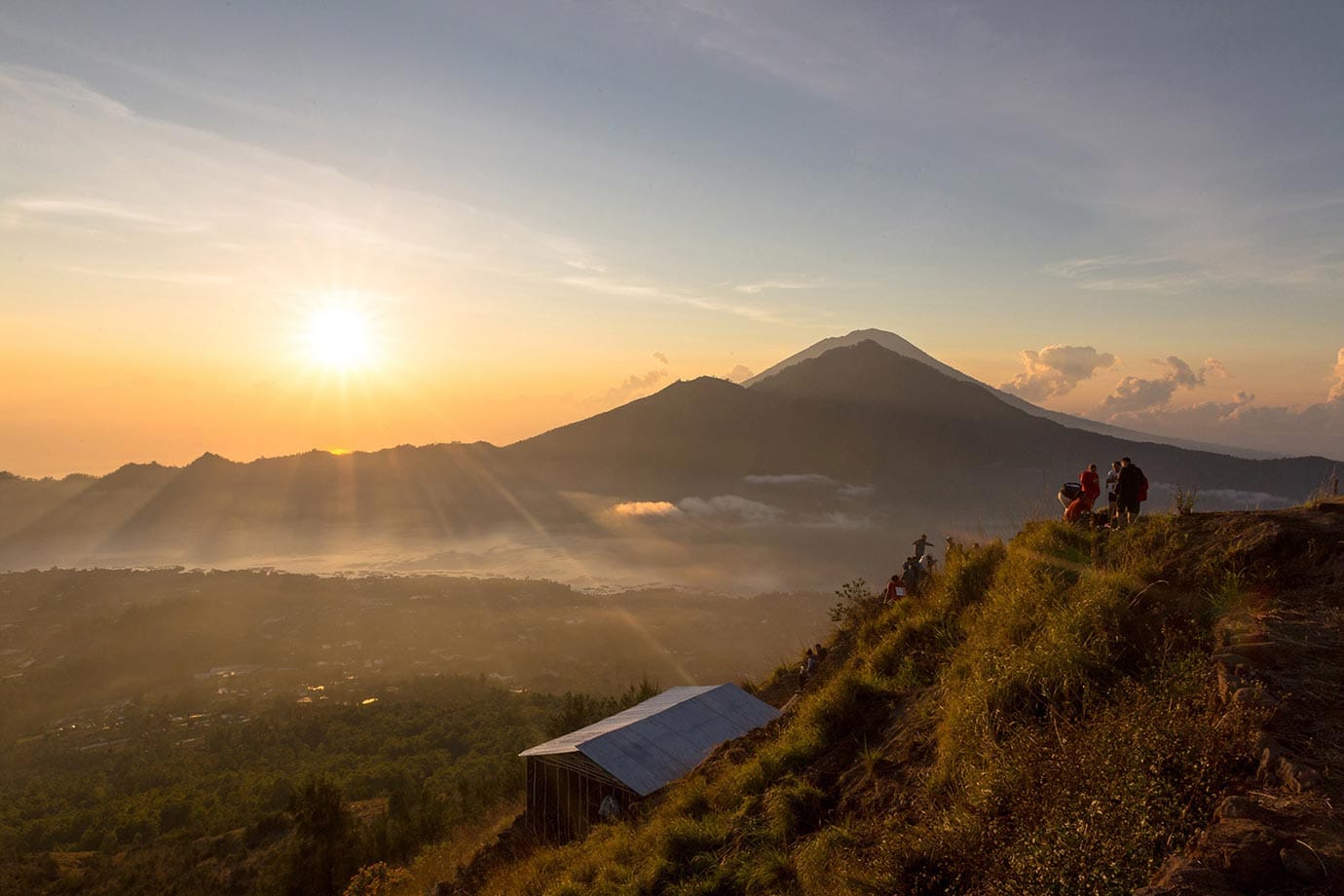 The moment we’d all been waiting for – sunrise

We didn’t set off trekking up Mount Batur until 4:30am, and by that time everyone was ready and raring to go.

Our trek started from the villa and took us through a tiny village before we got to the bottom of Mt Batur.

What they didn’t say was that they’d set a furious pace to get us to there! When I say it’s a fast pace, I mean it’s a real fast pace. It’s doable, but it is a proper leg burn. You have been warned! 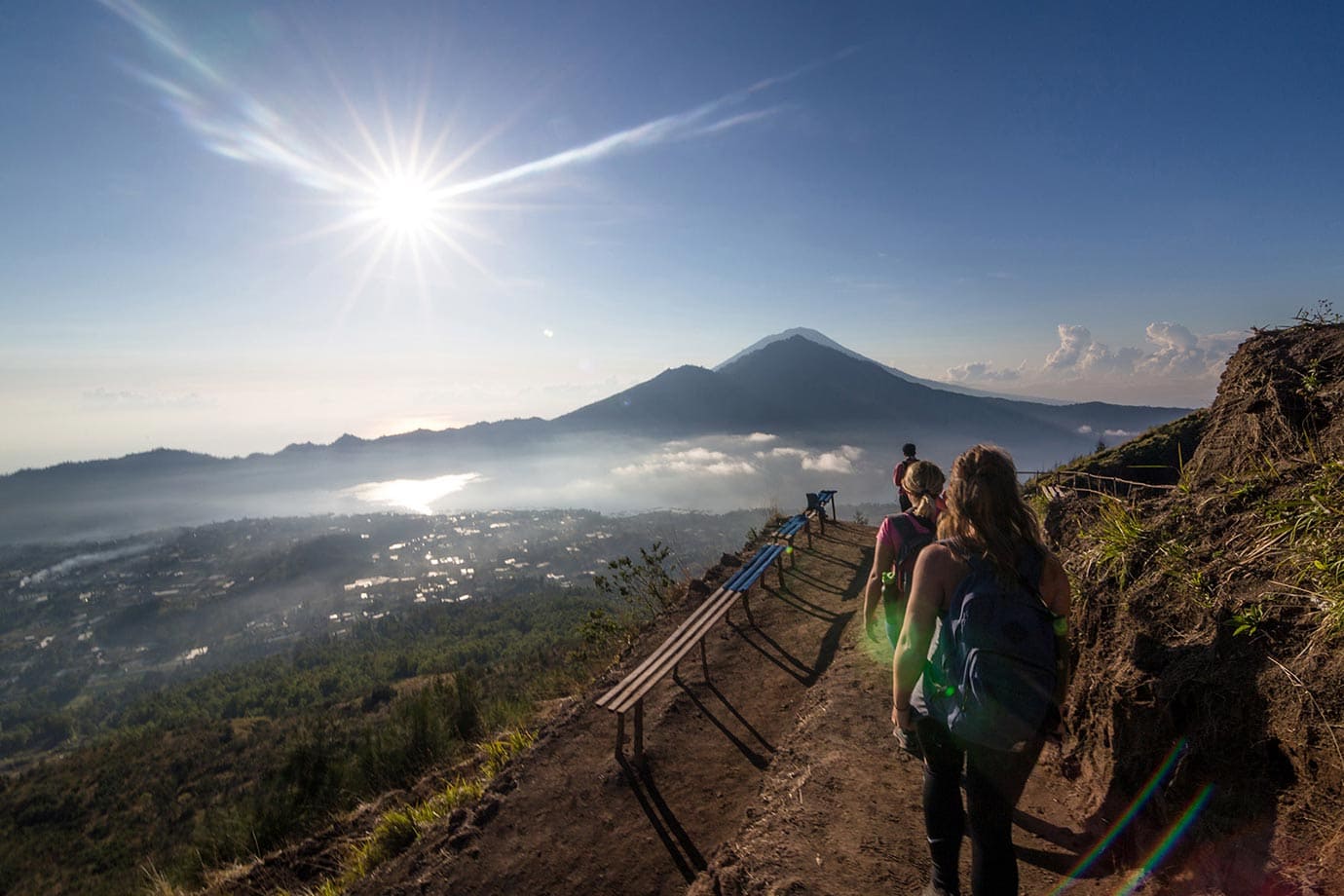 Trekking through the forest at Mount Batur

The trek started off going through a forest on the lower slopes of Mount Batur, and with only a torch to light the way all I could concentrate on was putting one foot in front of the other. When you’re trekking through the forests it’s almost pitch black.

However, once we broke through the forest on the mid-slope the volcano of Mount Batur opened out before us. As I looked up I could still make out the tiny specks of stars across the inky sky, and the faint outline of Mount Agung, the taller of the two mountains, was behind us.

With sweat streaming from my face, I turned around to see Chloe and Emily, the two awesome travel bloggers I was hiking up Mount Batur with, powering on, a fierce look of determination of their faces. They weren’t going to be defeated by the Mt Batur sunrise hike that’s for sure.

As we were climbing up, I spoke to Adi, our tour guide, and he said 98% of people make it to the top. True to his word, I only saw one person turn around, pain and disappointment on their face. This means that you’ll be able to do it too!

All the guides are fantastic at seeing who needs help and encouragement. They really are there to help you out. 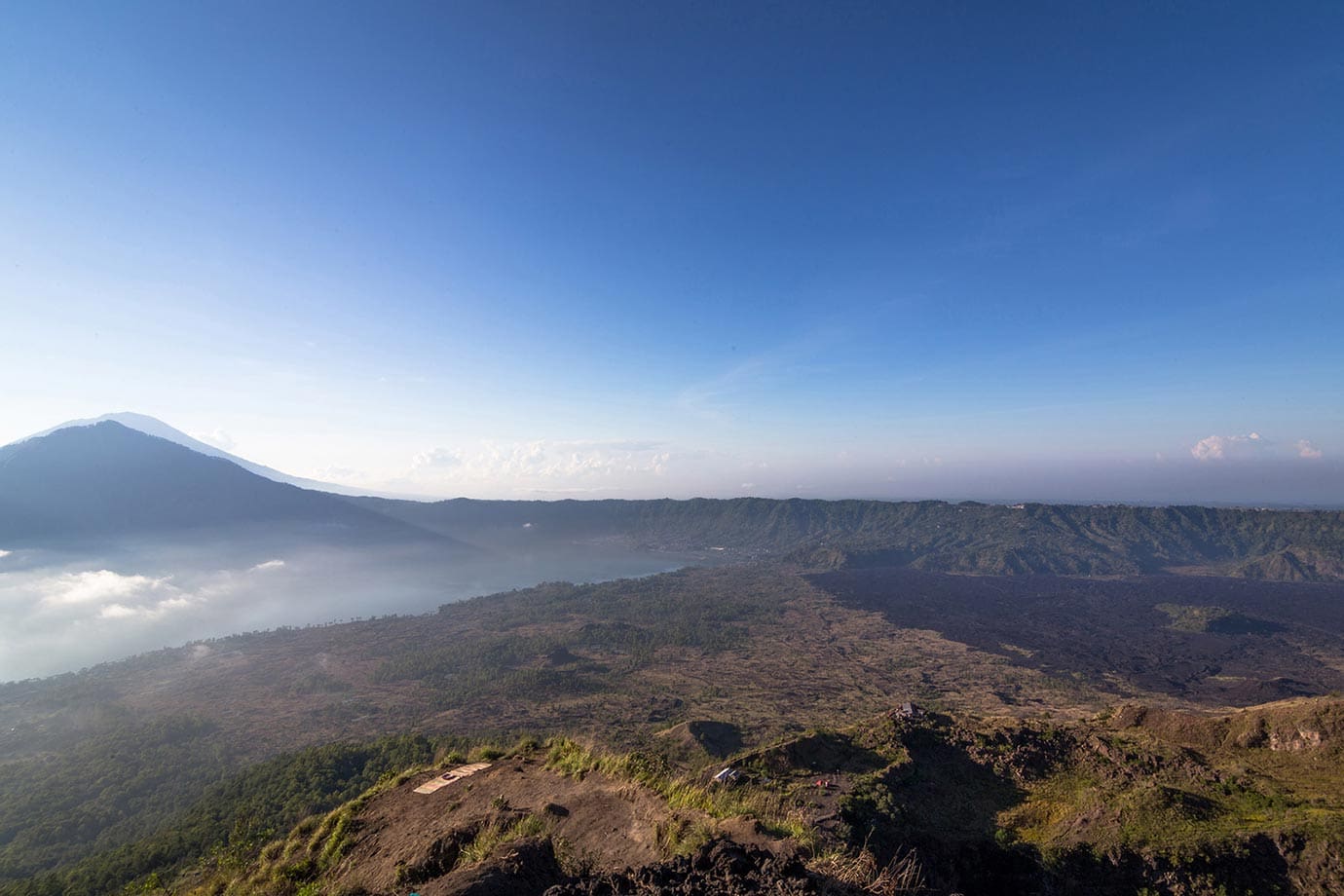 Views from the top of Mount Batur

Once we made it to the top of Mount Batur, everyone silently walked off in search of their own spot to watch the sun rise.

Chloe, Emily and I found a little bench and sat down, all of us elated that we summitted Batur, that sense of achievement that we’d just climbed the 1,717m of an active volcano, all before breakfast too.

We did it, we climbed Mount Batur and it felt damn good too. 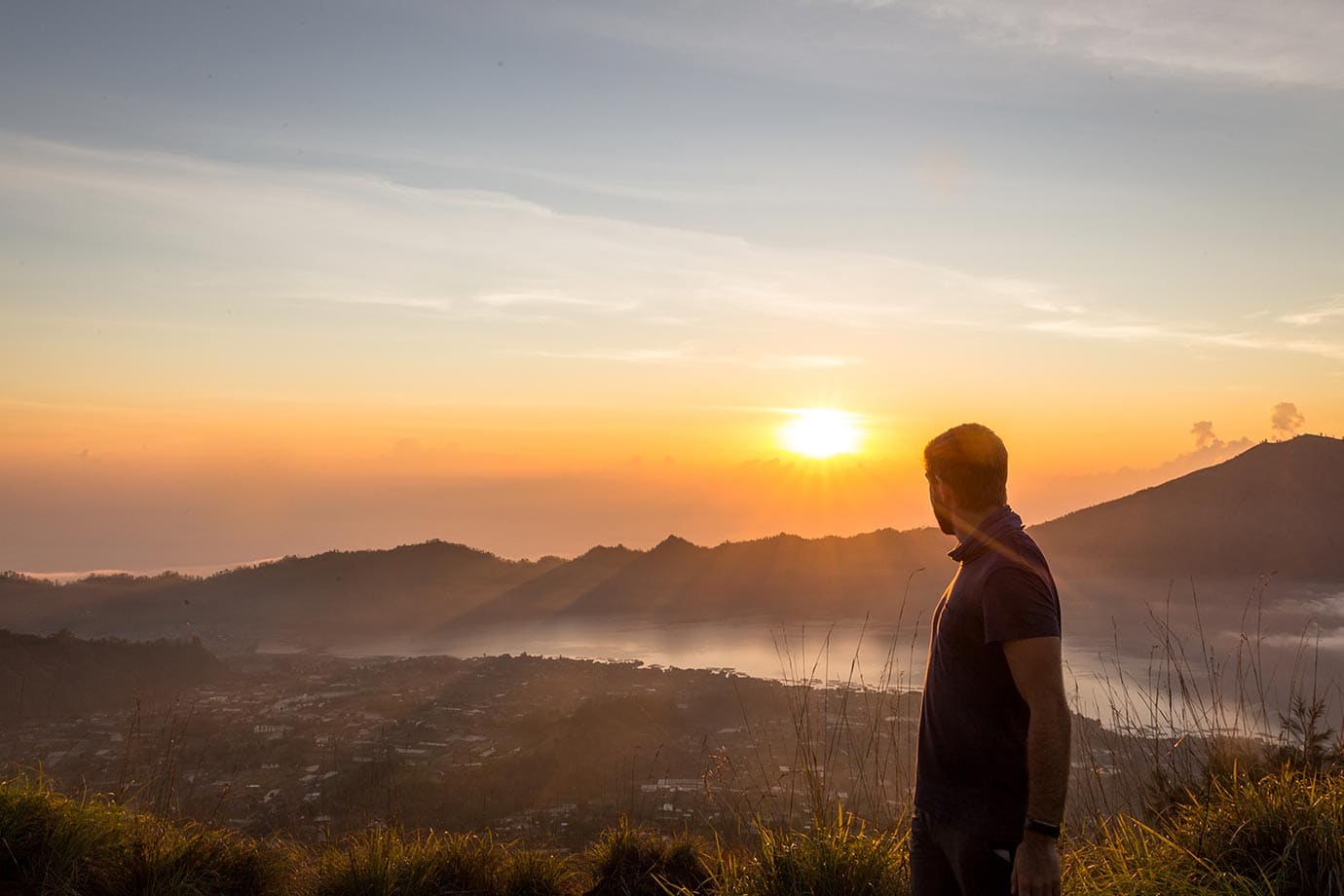 That feeling when you’ve just summitted an active volcano

Do you get food hiking Mount Batur?

Yes you do! After we had that magic moment of watching the sun rise, we went off in search of some food.

Our guide Adi was waiting for us with little boxes of breakfast. This contained an orange, a banana, and a couple of slices of bread. “Adi, I thought were we having eggs for breakfast?” I piped up.

“Oh, for the eggs you have to follow me!”

Adi then led us toward the volcanic steam billowing from the side of Mount Batur.

There, in a crack in the rocks, were a bunch of eggs cooking away in the volcanic steam. As far as boiled eggs go, this was an extra special way to do them! 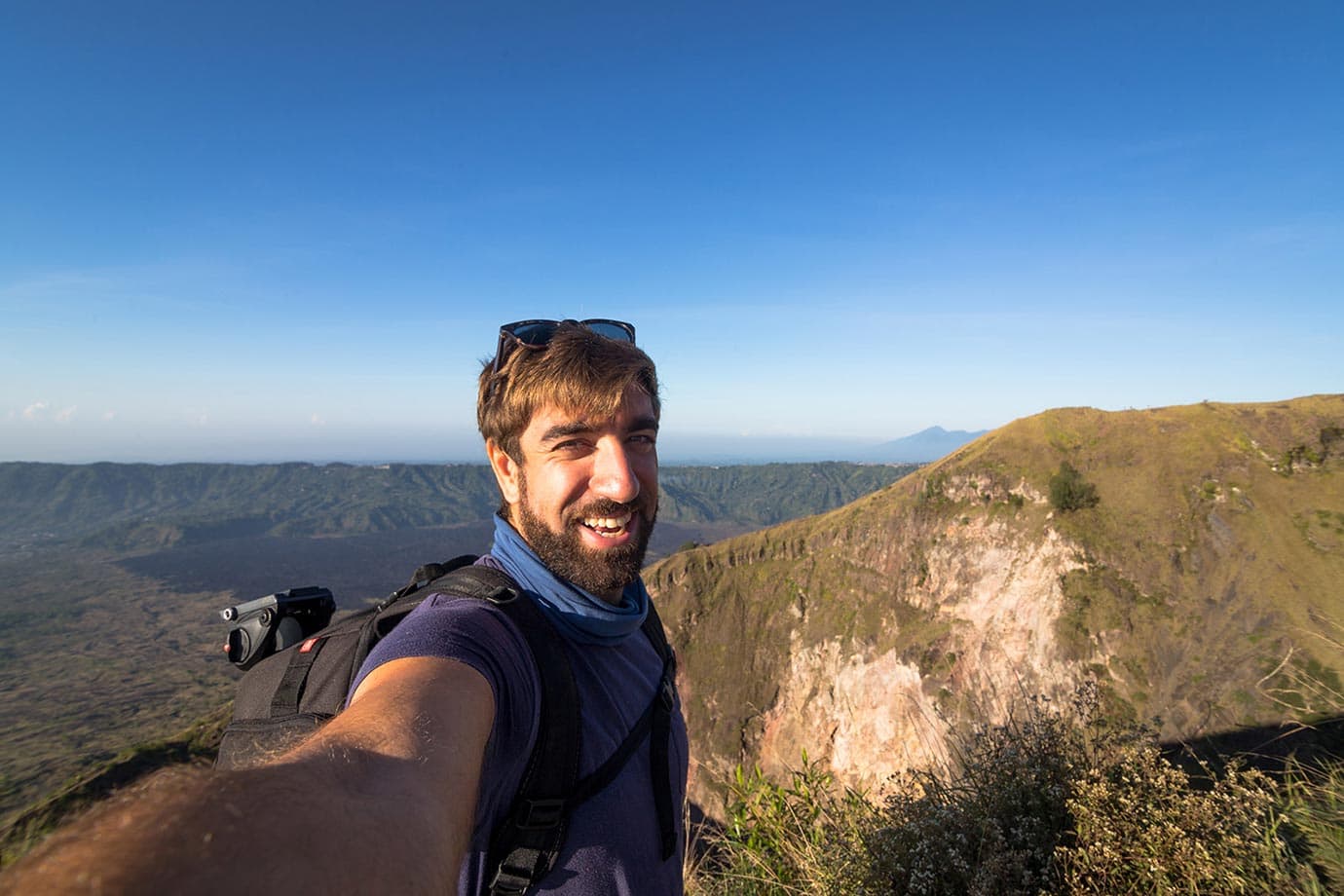 You’ve got to have a selfie at on Mt Batur!

Getting back down the volcano was a lot easier and quicker than hiking up Mount Batur that’s for sure.

We took a different way down, and with soft volcanic sand under foot I found it a lot easier just to run down. I was still on such a high that I’d just done the Mt Batur sunrise hike so I still had a lot of energy to burn off.

I would say the majority of other people walk it though. And with no time delays you really can take it a lot easier than on the climb up. Whereas it takes about an hour and a half to climb up Mount Batur for sunrise, you can walk down in well under an hour. 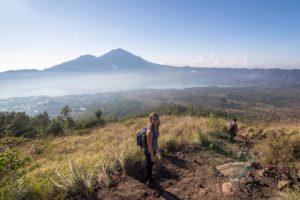 Hiking back down Mt Batur 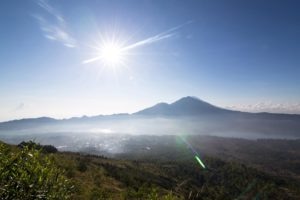 The outline of Mt Agung in the background 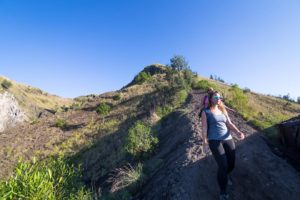 Running on volcania ash and gravel 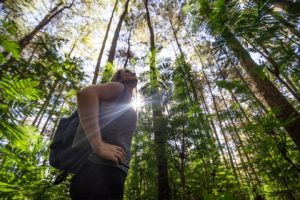 Hiking through the trees at the bottom

Once we got back to the villa where we had more coffee (again, needed!), I looked around at everyone else who had just climbed Mount Batur. Even though a lot of people seemed wrecked, everyone was so happy that they had done it, all smiling and laughing.

As a little treat to ourselves, we added on a visit to Toya Devasya, a volcanic spa just a short 10 minute drive from the villa.

With Lake Batur and Mount Agung in the background, you couldn’t ask for a prettier setting, and it was just so relaxing floating around in the hot pools and feeling the aches and pains from trekking Mount Batur melt away.

The hot springs really do cap off a perfect day and I’d really recommend adding this onto your tour. It’s a tiny bit more expensive but it’s 100% worth it in my eyes. 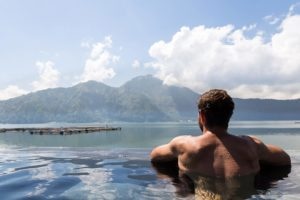 Taking in the views of Mt Agung 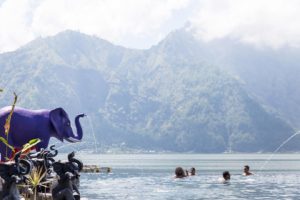 People relaxing in the hot springs 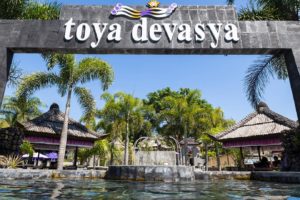 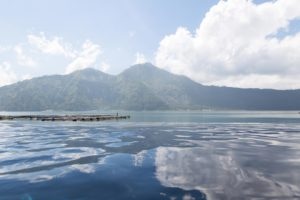 Such dreamy views in Bali

Waking up at 2am and climbing up a volcano before sunrise is never going to be easy, but I can honestly say that it’s such an amazing and rewarding experience. It’s without a doubt one of the best things you can do in Bali and so different from the temples of Borobudur and the islands of Raja Ampat.

If you’re looking for something that’s equal parts challenging and exhilarating, you really can’t go wrong with the Mount Batur sunrise hike. It’s something you really won’t regret!

I’d say if you have a average level of fitness, you’ll definitely be able to hike up Mount Batur. As I said, only 1-2% of people don’t make it to the top, so those are pretty good odds!

How much does the Mount Batur tour cost? 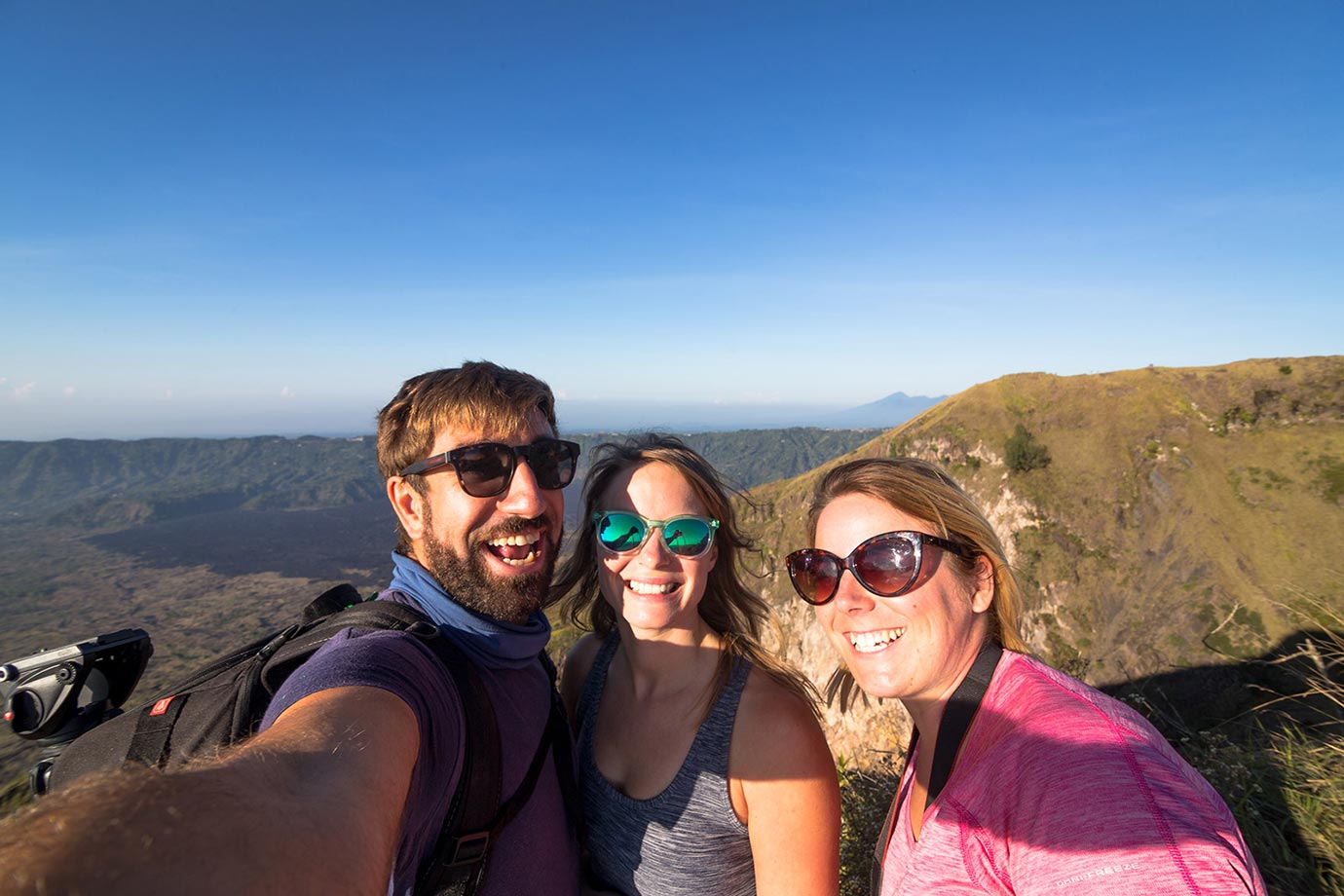 Another really popular tour is the Volkswagen jeep safari tour on the volcano itself. This is where you drive around the volcano in a jeep for the day taking in the sights.

Here are a few other tours for you:

Are you thinking of doing the Mt Batur sunrise hike in Bali? Are you excited or scared? If you have any questions then just post them in the comments below! 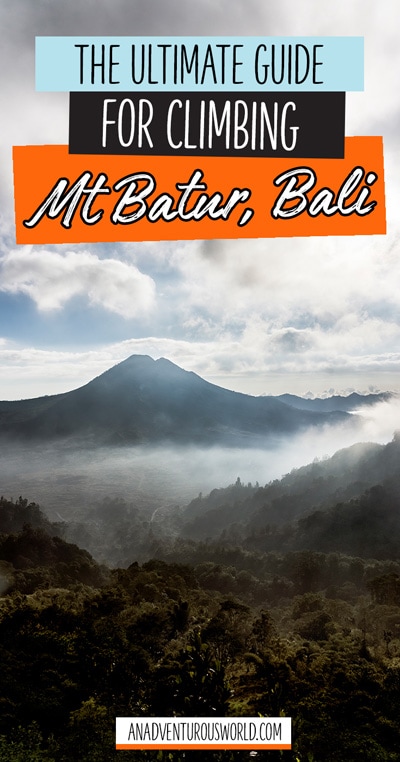 This is so awesome Macca! I wanted to do this hike so badly when I was in Ubud a couple of weeks ago but was so exhausted catching up on work that I thought the 2am wake-up call would do me in Next time, for sure!

Argh Casey, you 100% should've done this hike! It's without a doubt one of the best day hikes I've ever done and that's saying something! As you said, there's always next time when you're back in Bali again!

I still regret not hiking the mount batur when I was on Bali. Well, for sure next time! x

Ah, if you go back you've got to do it! You'll absolutely love it!