A look at the lost city of Jordan, one of the new seven wonders of the world

All I have to do is say that one five-lettered word and it immediately evokes images of rose-coloured temples, its columns and statues as part of the desert landscape as the surrounding terracotta cliffs.

Walking though the Siq, the beautiful canyon nature has carved into the surrounding cliffs, and seeing the Treasury slowly unveil itself from behind a rock, almost as if shy, is a memory that will stick with me forever.

I wish it was my memory, my special moment, one that I didn’t have to share, but everyone who sees Petra for the first time is affected in exactly the same way. It’s simply awe-inspiring.

There’s a reason Petra was inducted as one of the “New Seven Wonders of the World” – it is a place that will leave you truly captivated. 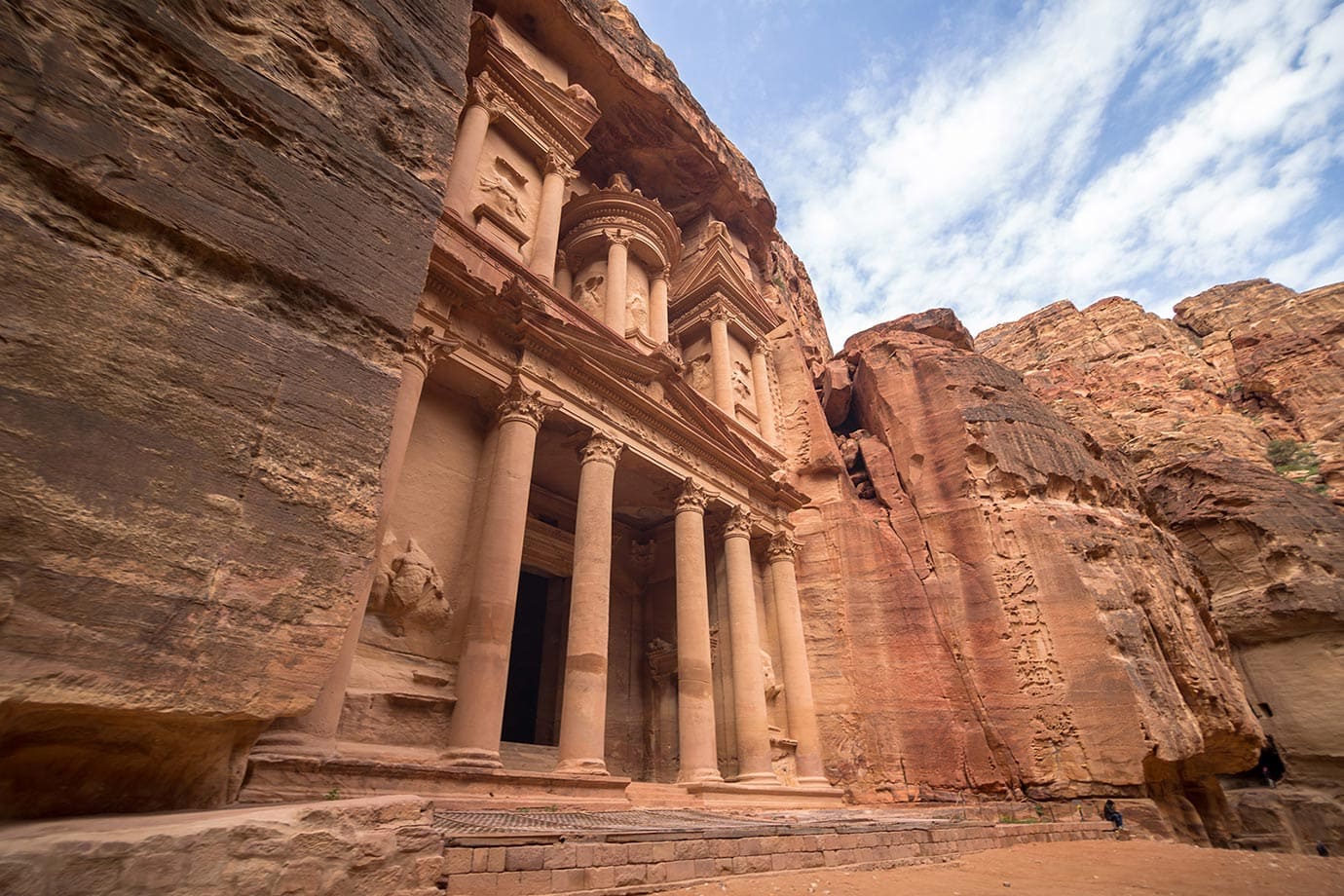 Just the day before I was walking in the footsteps of history at Jerash, another of Jordan’s lost cities.

That evening, I slept under the stars in a Bedouin camp in the desert, each one like diamonds strewn across a black blanket.

That morning I woke up drinking sweet coffee with dusty rocks surrounding me, the knowledge that it would only be an hour before I’d finally see Petra, a place I’ve wanted to explore ever since I was a little boy.

As far as two-day tours go, this was right up there with the best. 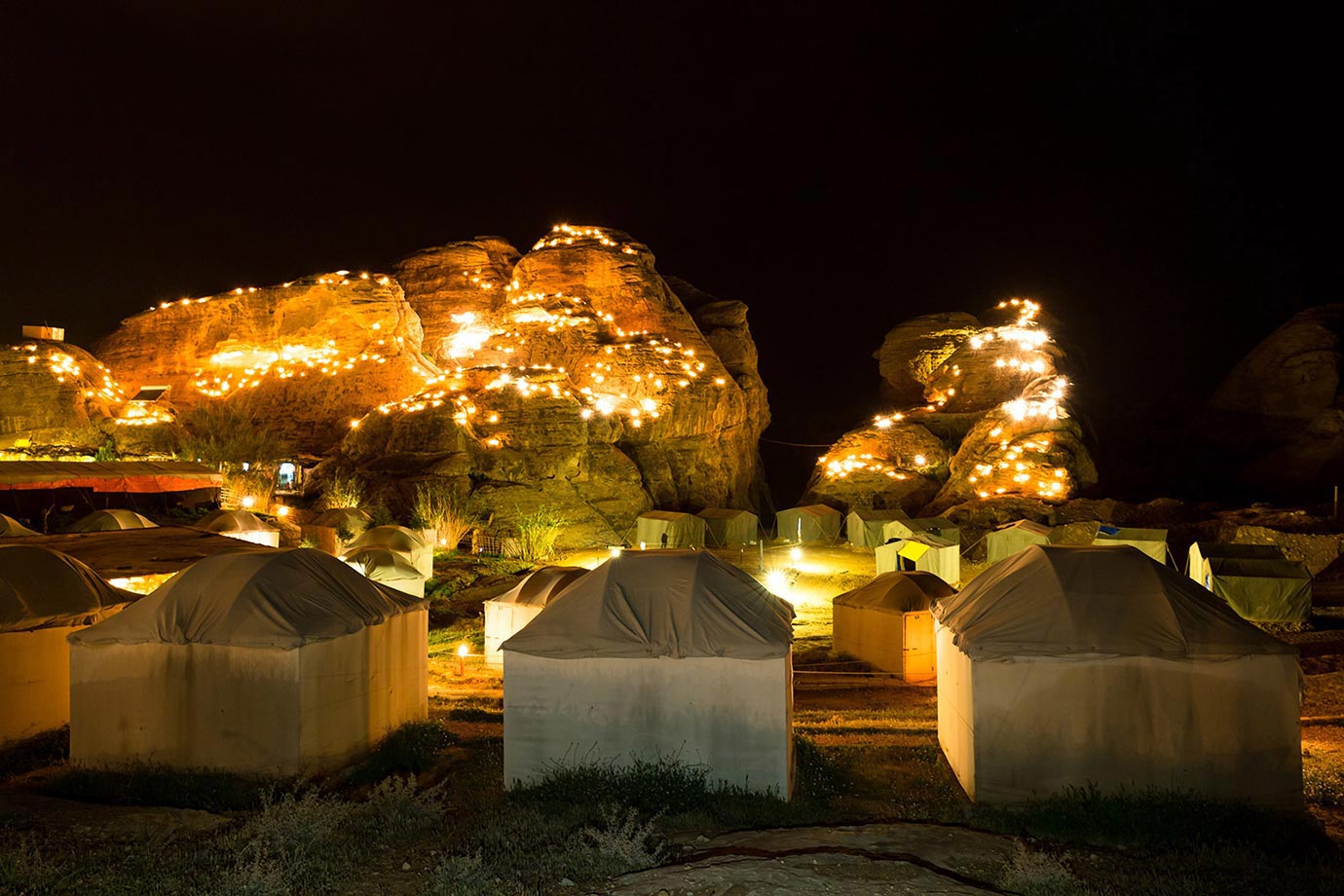 Continuing on our tour from Jerash, Petra is a good four hours to the south of Jordan.

We arrived to the Seven Wonders Bedouin Camp under the cover of darkness, but with lanterns lighting up the surrounding rocks as clearly as the stars above it gave a mystical feel to the place – it felt like I was in the middle of the film Arabian Nights.

That morning I woke up at sunrise. Like a kid at Christmas waiting to open his first present, I was too giddy with excitement to sleep much more. Dreams were to be realised. 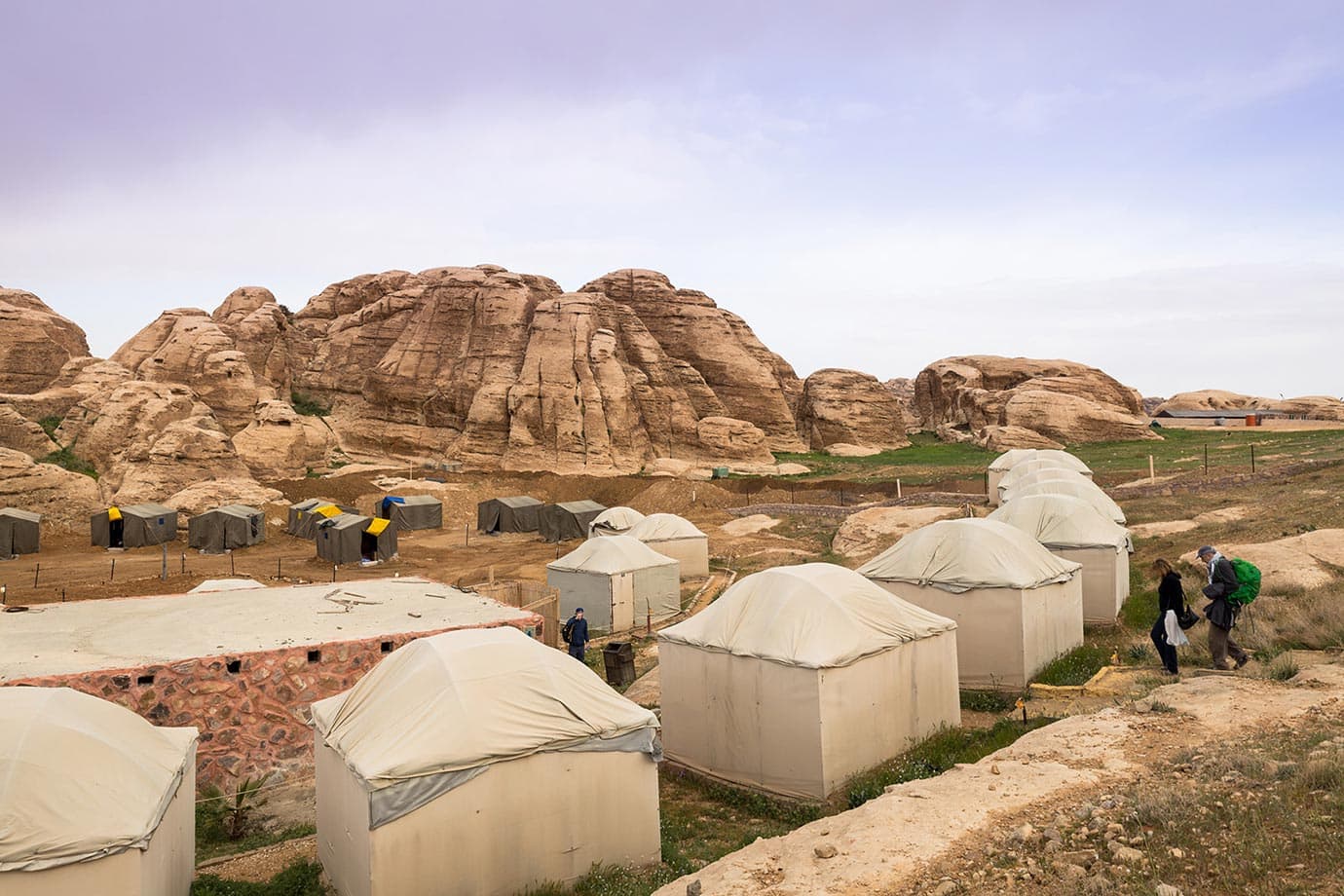 The entrance to Petra is just a short 30-minute drive away from the Seven Wonders Bedouin Camp meaning we were there long before the tour buses from Amman turned up.

Ali, our Abraham Tours guide, gave us all a brief history of Petra before we set off, but he soon realised there wasn’t much chance in holding Chloe and I back; we wanted to run off and beat the crowds to the Treasury and he duly let us go. 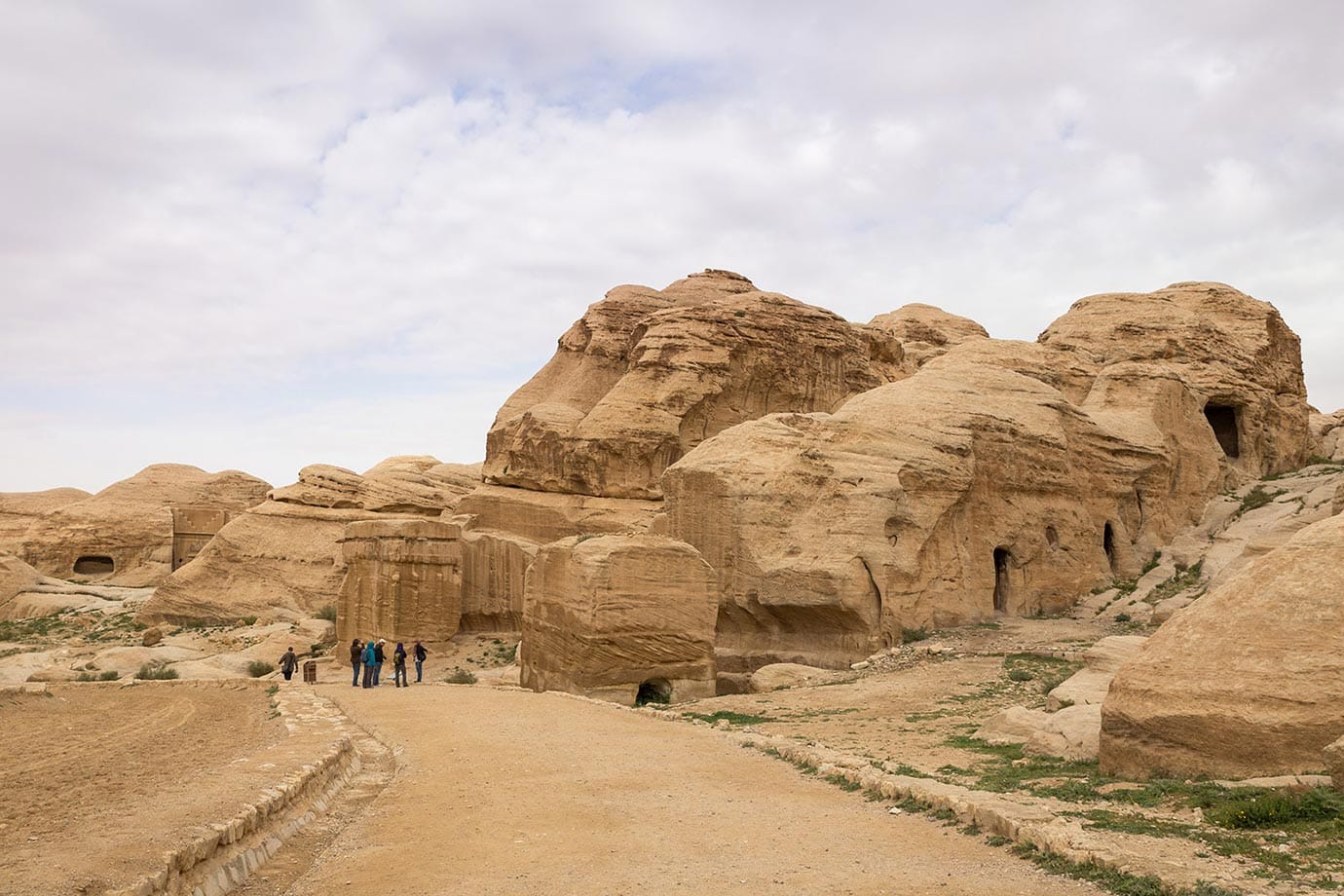 To get to the Treasury, first we had to walk through the Siq.

As in antiquity, the Siq is still the main entrance into Petra. With 80m high cliffs on either side of you, the Siq was formed by moving tectonic plates and the pathway twists and turns for over a kilometre.

Even though we were desperate to see the Treasury, it is the Siq that sets the tone for the day, of the wonders that await. 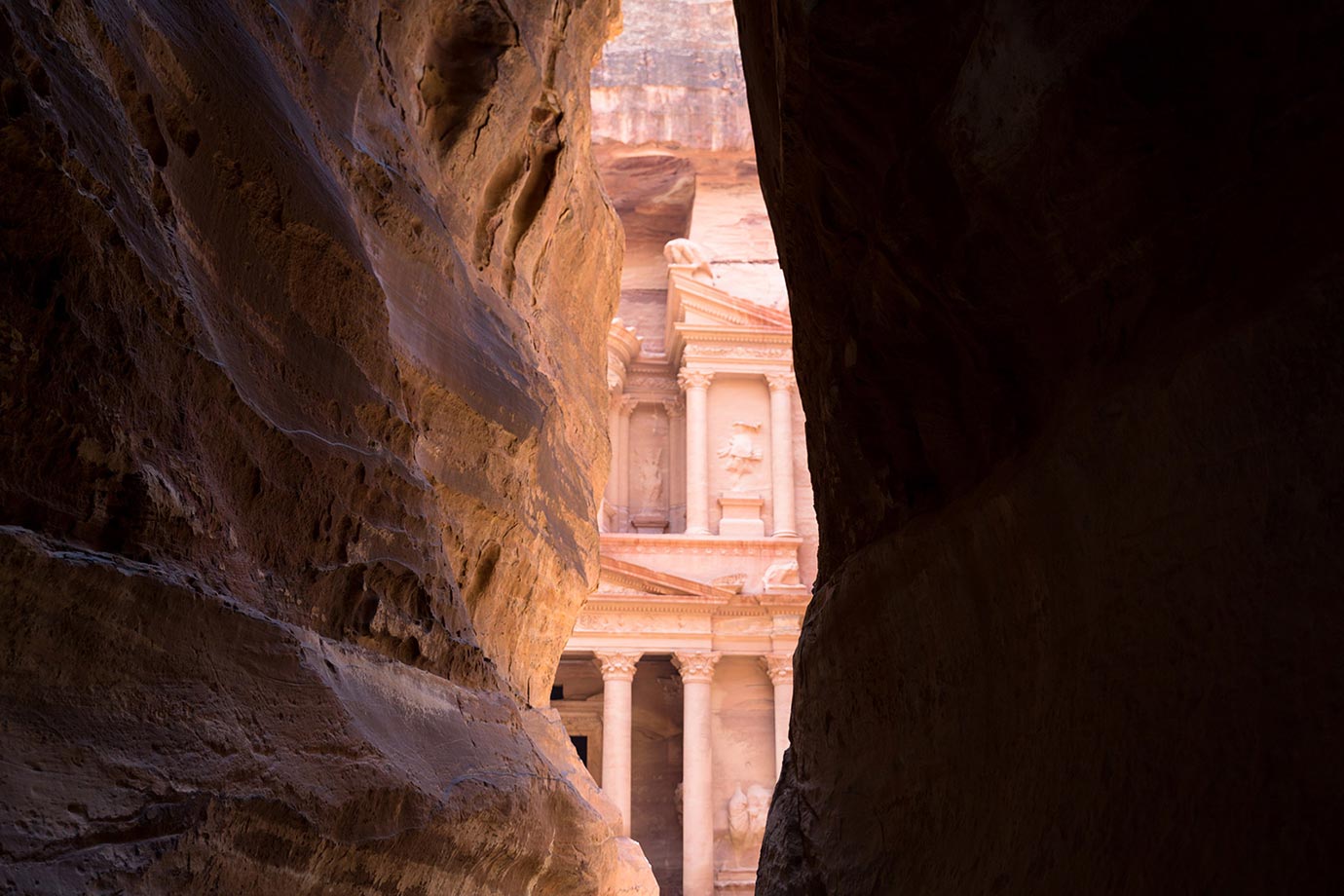 As I got towards the end of the Siq I knew what awaited me – Al Khazna, the Treasury, the beautiful great temple.

As I’ve already said, nothing quite prepares you for seeing the Treasury for the first time. It really doesn’t.

For me, I just couldn’t stop smiling. 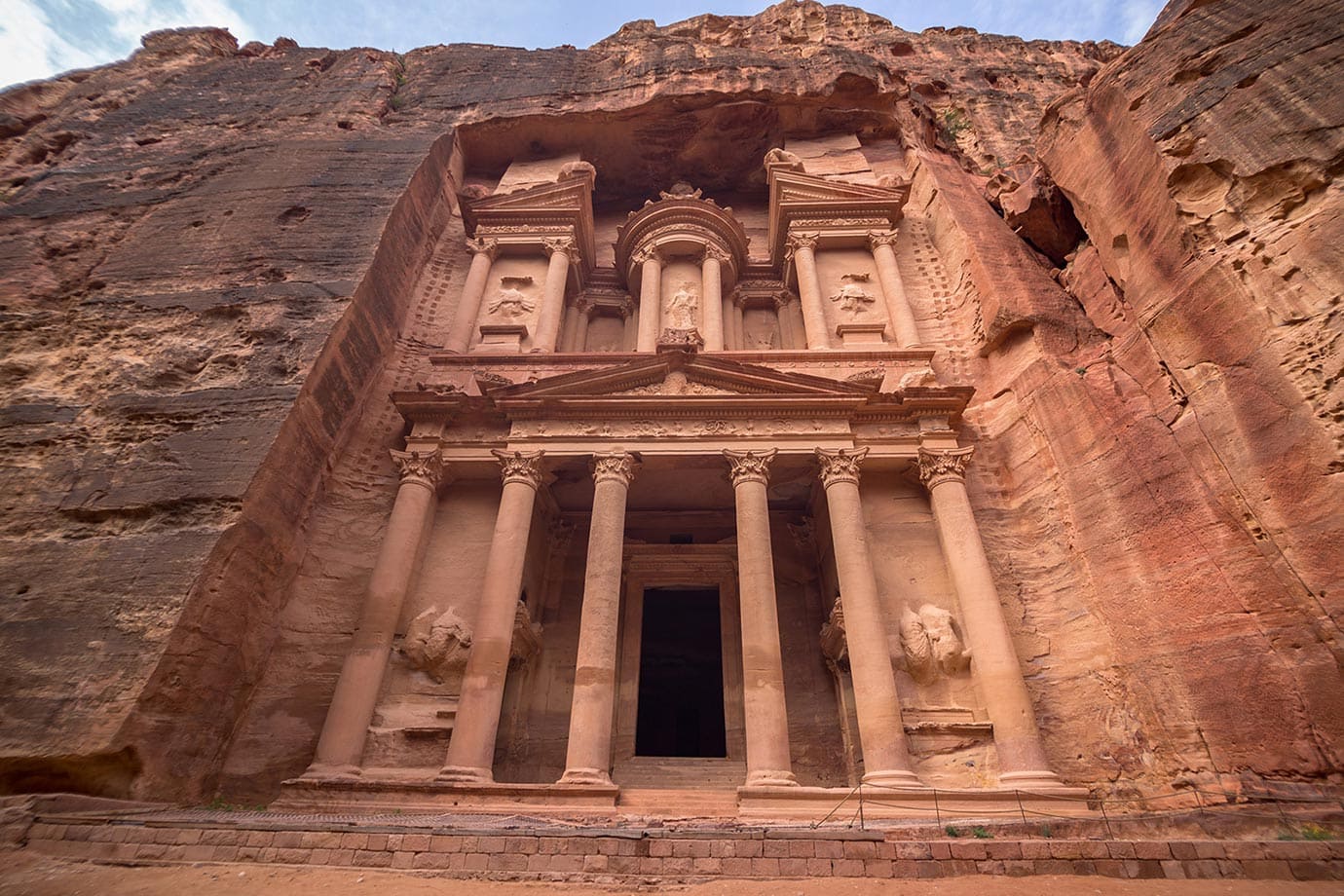 At 40m high, the Treasury is huge, and because Chloe and I rushed to beat the crowds we practically had the place to ourselves.

I couldn’t help but wonder what it must’ve been like being Jean Louis Burckhardt, the Swiss explorer who rediscovered the lost city of Petra in 1812. It was probably as every bit as beautiful then as it is still to this day. 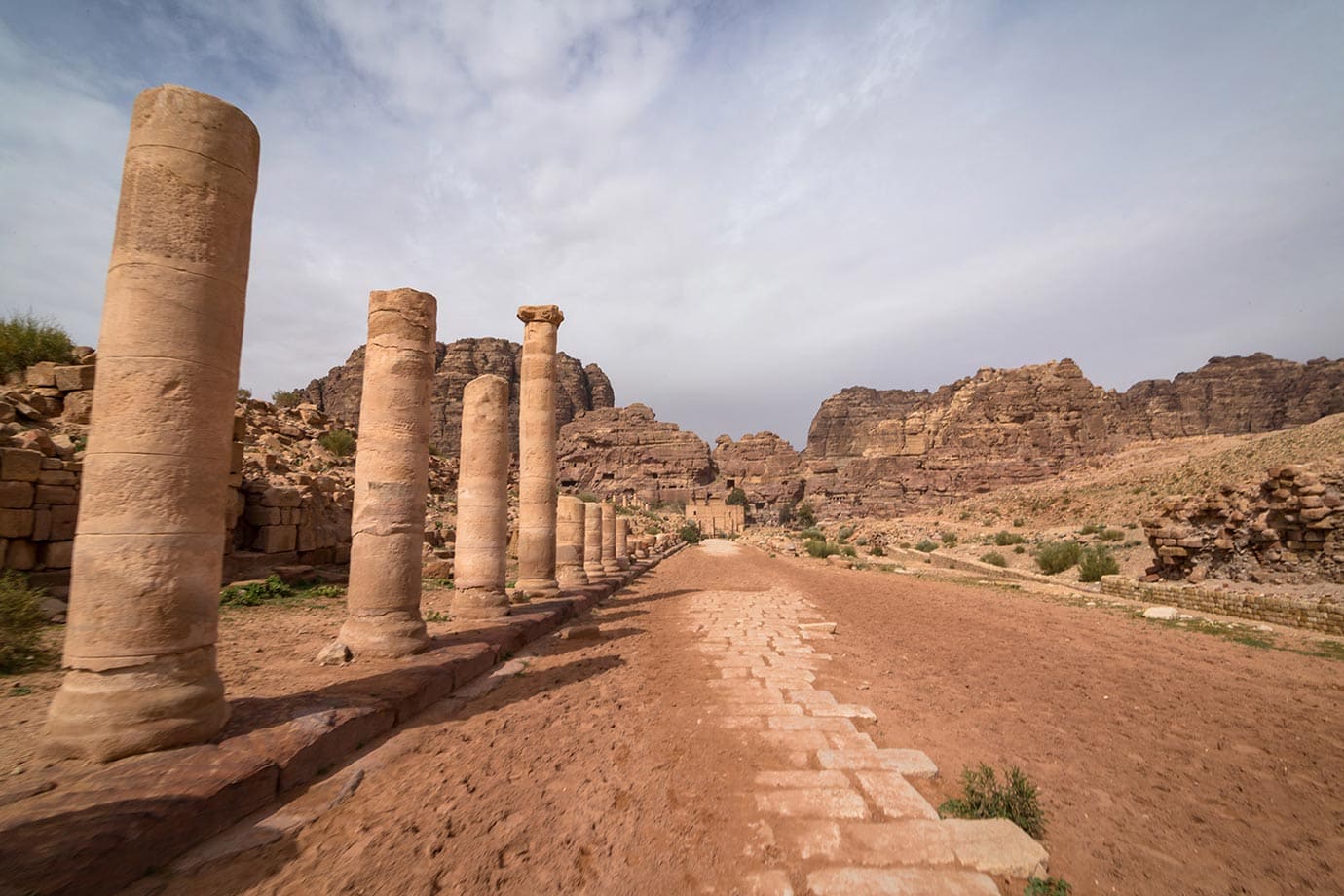 From the Treasury, Chloe and I were determined to make it up to the Monastery. There was just the 800 steps and two-hour hike standing in our way.

Measuring 47m wide and 48m high, the Monastery (also known as Al Dier) is arguably even more impressive than the Treasury, especially when you take its location into consideration. Hidden away up in the mountains, it’s hard to believe how man created something so magnificent here.

The climb up is fairly tough, but as soon as it levels out and you walk into the shadows of the Monastery, it’s worth it. Words will never do a place like this justice. 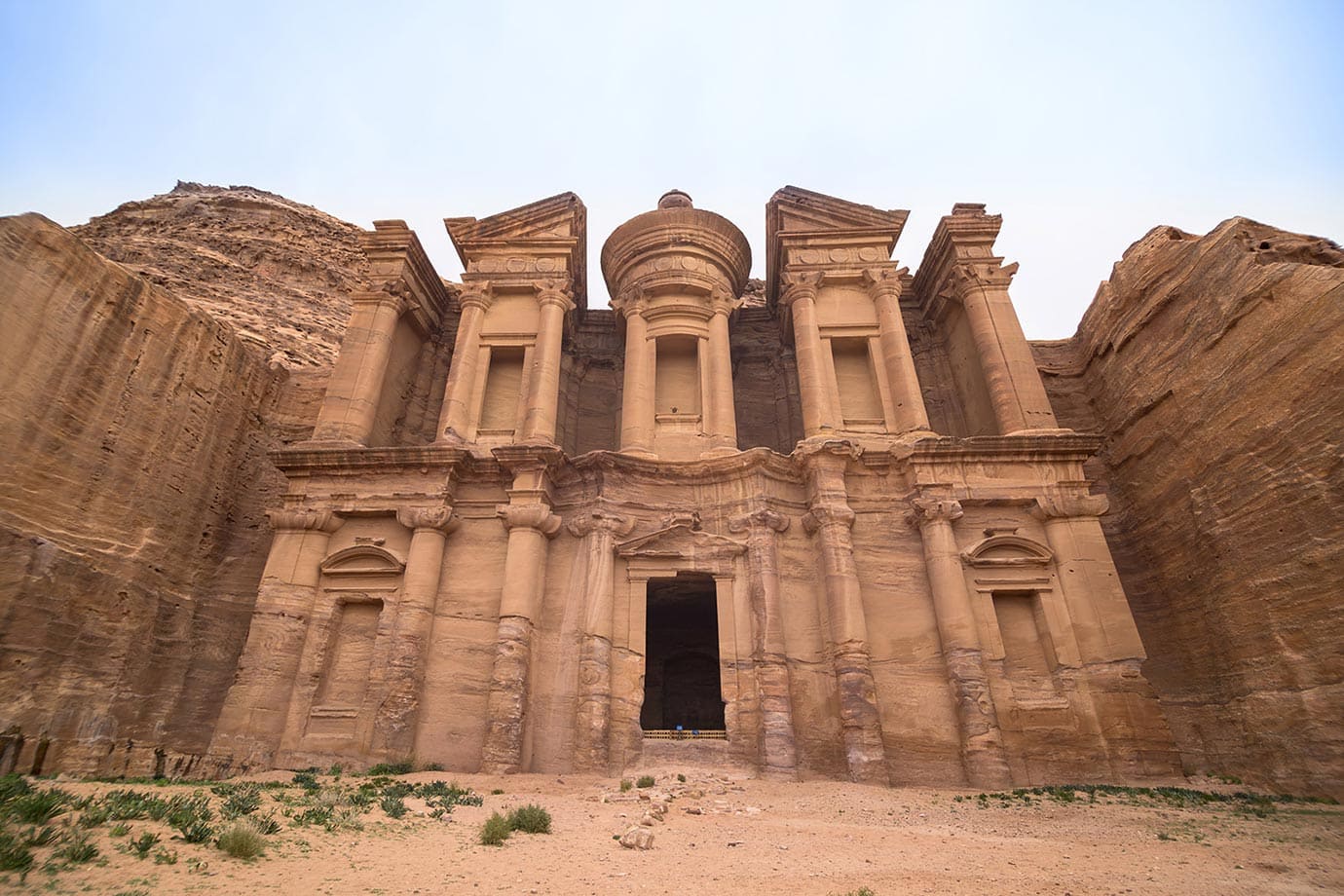 Once we made it to the Monastery we were faced with a dilemma. With only about three hours before our bus departed back to Amman, we could either relax, have a cup of mint tea, and take it easy back to the entrance, or we could really push ourselves to Al-Khubtha, the secluded viewpoint overlooking the Treasury.

Well, what do you think we did? 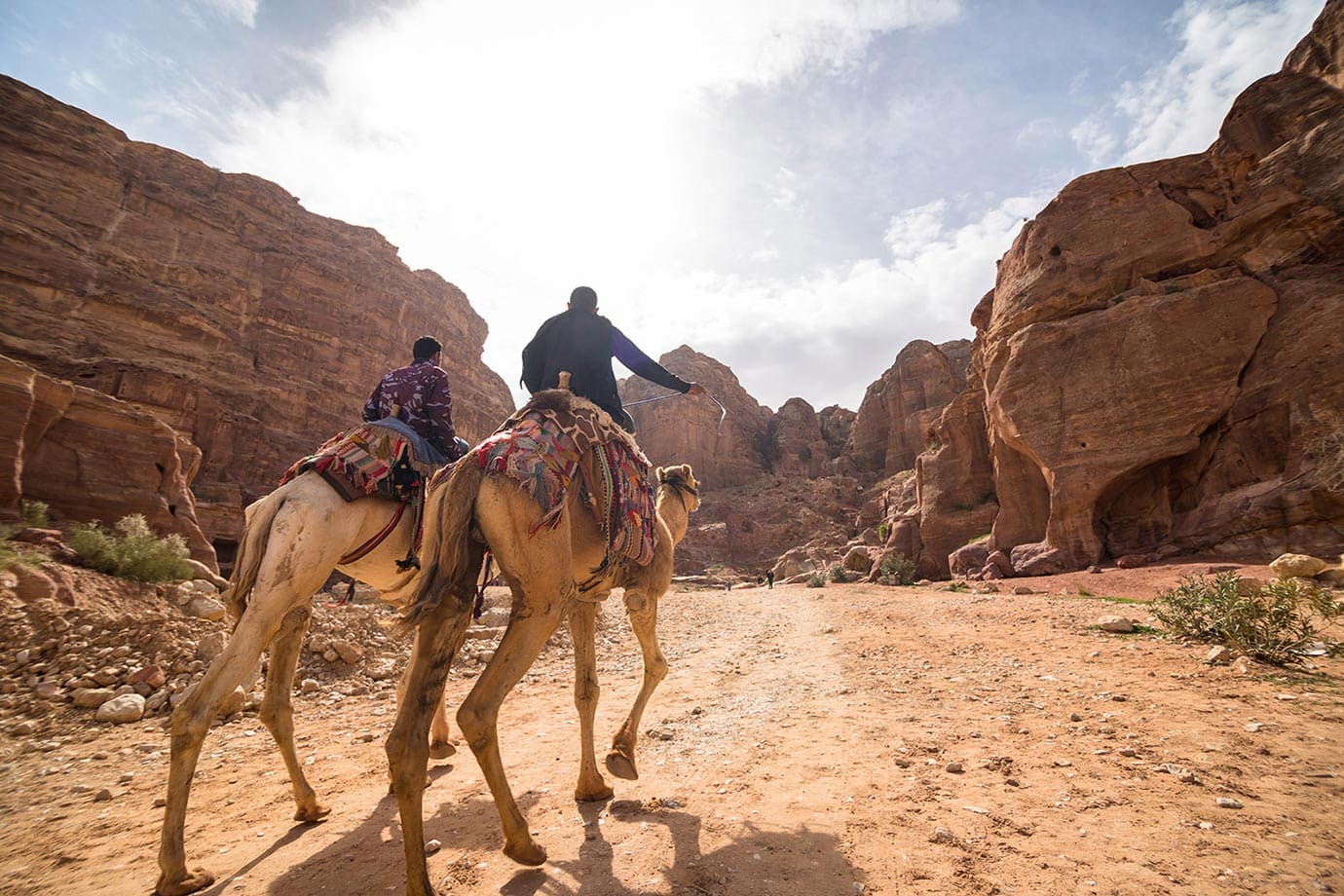 I crunched the numbers in my head and quickly realised we weren’t going to make it on our own two feet, so once we made it back to the Royal Tombs we hired a couple of donkeys (10 JD each) to take us up the 700 steps to Al-Khubtha.

Ideally, we wouldn’t have had to hire a donkey, but there was just no way we were going to make it in time. Even then we were pushing it. 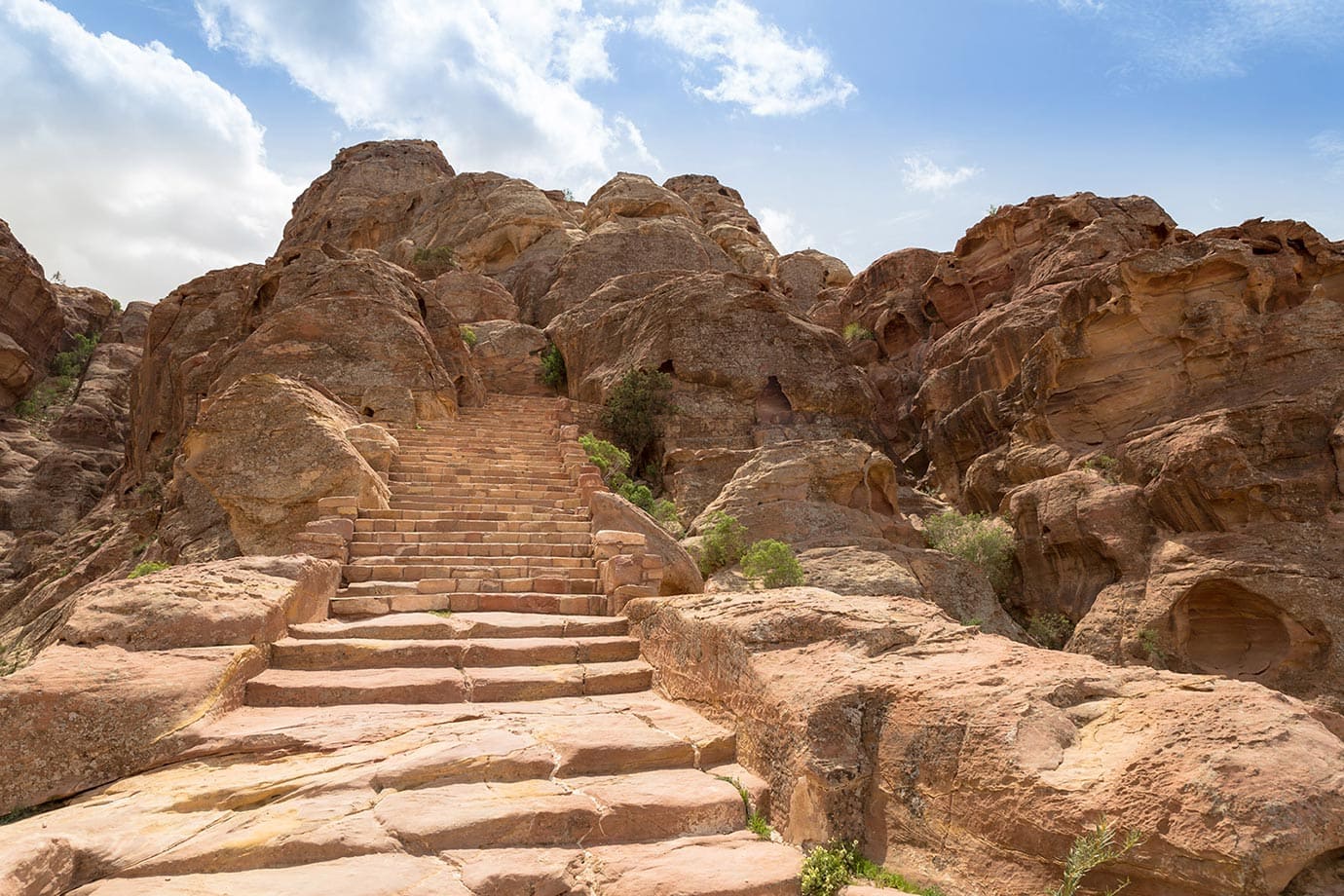 The Al-Khubtha trail loops around the back of the Royal Tombs and takes you high up into the mountains, and once again it felt like we were the only people around.

Once we got to the viewpoint, a small tent with a couple of Bedouin drinking tea awaited us. As we shuffled into the tent our bodies were pulled to the edge of the cliff. There, below us, was one of the best views anyone could see at Petra – the Treasury like you’ve never seen it before.

From that vantage point, with the light breeze carrying silence, with people scurrying around below like ants, it’s easy to let the mind wander and you start to believe Petra wasn’t built by man at all.

The reverie didn’t last long with the realisation we were really pushing it for time. Our tour of Petra was coming to an end. 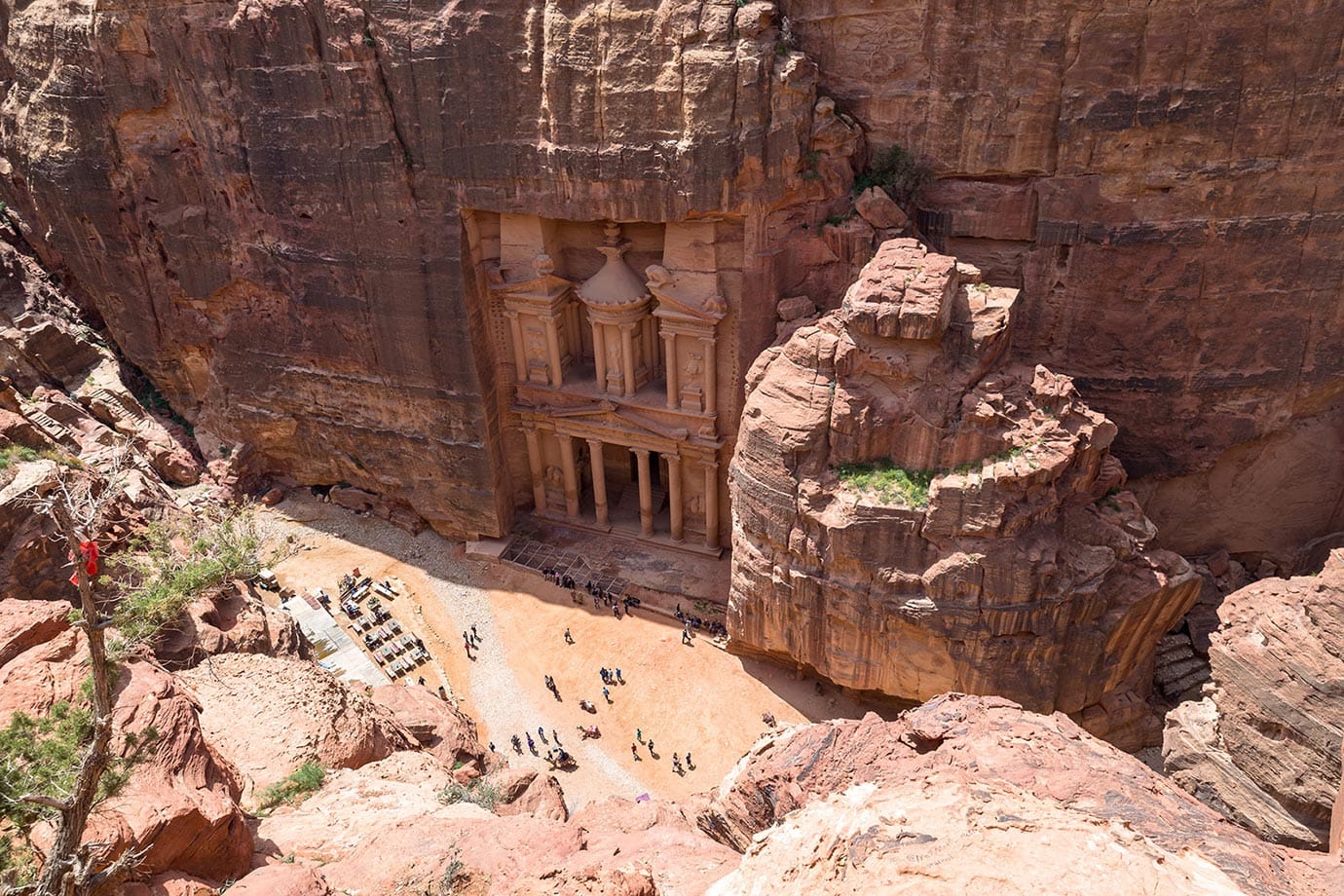 Petra was everything I imagined it to be and more. Oh so much more. In fact, it really is one of my favourite places in the Middle East.

With family living in Jordan, I’ve grown up with stories from Petra ever since I was a little boy, of Bedouins riding camels, of people sipping sweet mint tea in the shadows of these temples, and I can’t tell you the hours I’ve wasted dreaming about this place. 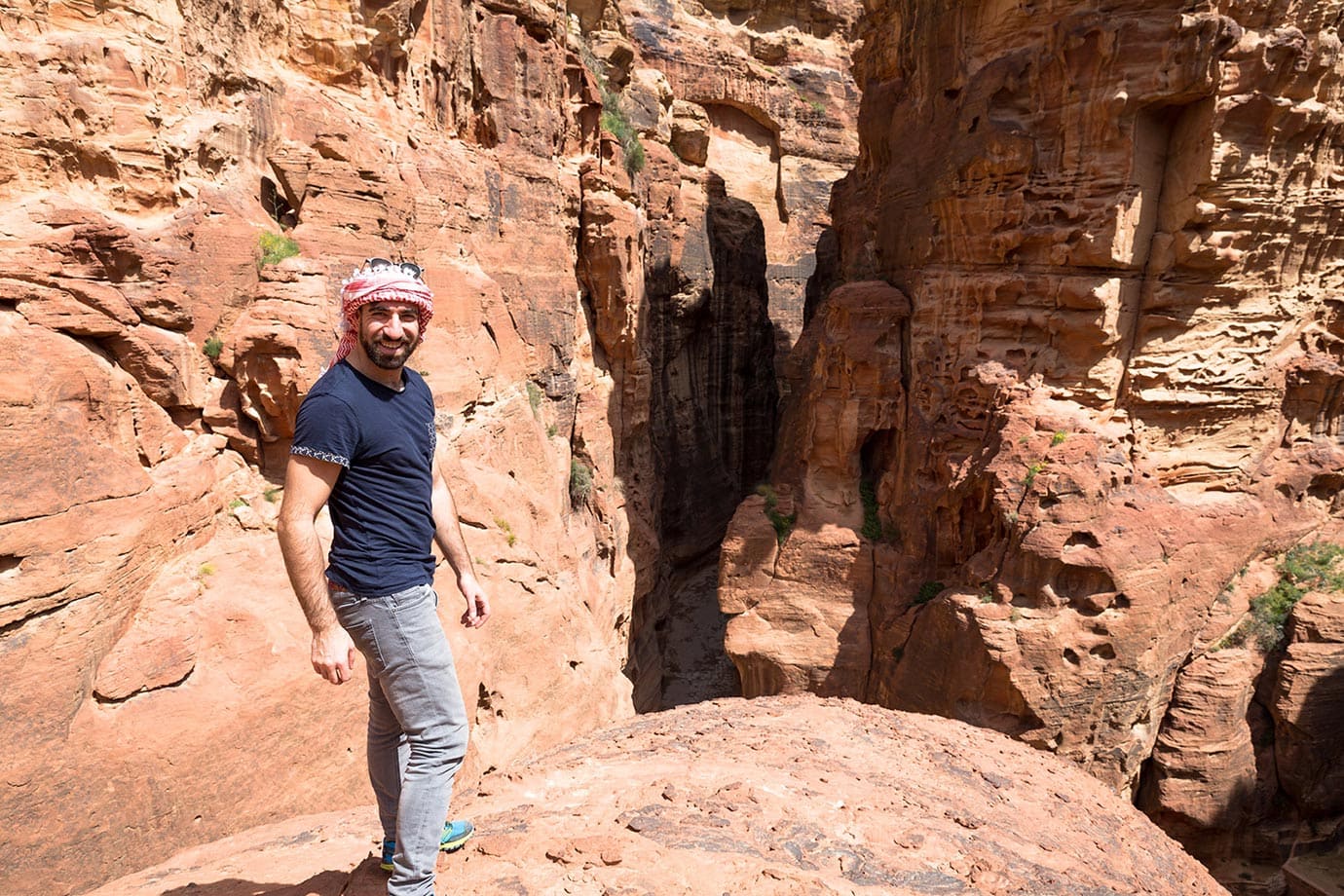 Things to take for Petra:

My tour to Jerash was a part of the two-day, one-night Petra Tour with Abraham Tours. As always, all views and opinions are entirely my own and without bias.

If you’re travelling around the country then I really recommend this guide ‘Backpacking in Jordan‘ which is packed full of travel tips and unique things to do. This guide is perfect for first-timers in the Jordan!

Have you ever been to Petra before? Was it every bit as magical for you as it was for me? I’d love to hear your thoughts so let me know in the comment box below! 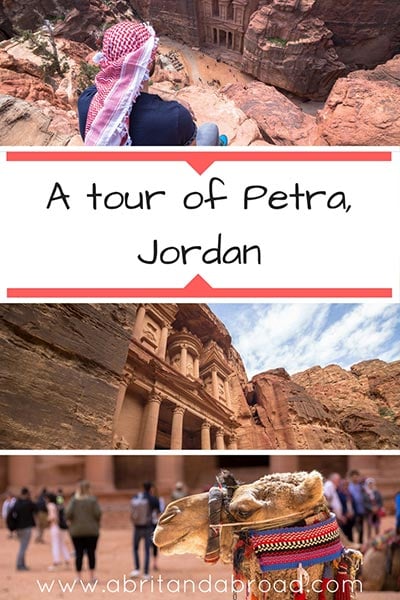 Thank you for providing this useful information.