Exploring the underwater world of Dos Ojos, one of the most popular cenotes in the Yucatán Peninsula

We surfaced in a cave, the light from our torches illuminating all the stalactites hanging down, a pale blue bouncing off the walls, an eerie silence to the place.

“You see them over there?”

“The bats. This cave is full of bats hanging down.”

Almost to confirm this, one of them dropped down and circled over our heads a couple of times before flying off into the darkness. Only 10 minutes into our dive at Dos Ojos, we knew this was another one to remember. 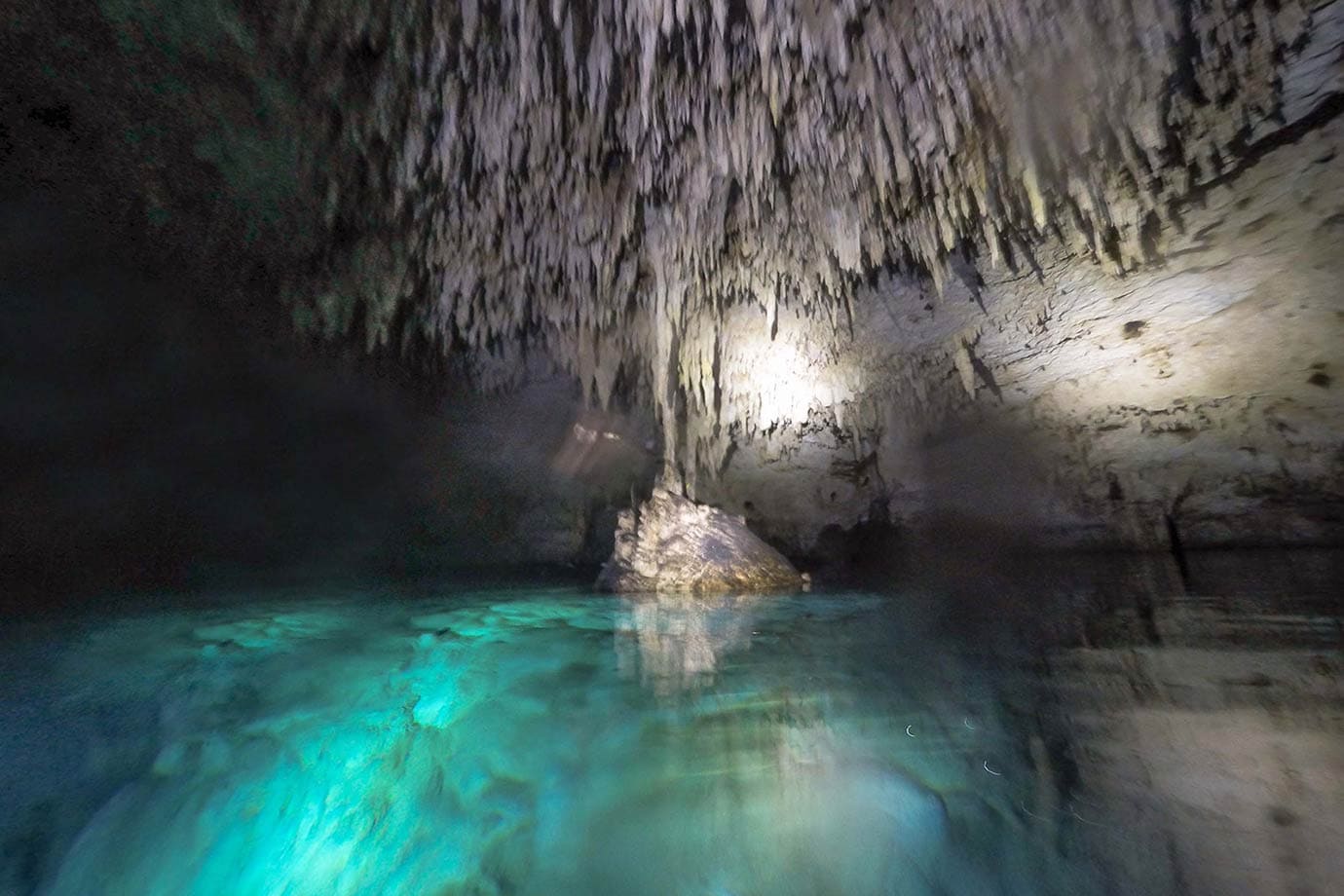 After spending the day before diving Cenote Angelita, today we were at Dos Ojos exploring one of the most popular cenotes in the Yucatán Peninsula. With over 8,000 different cenotes in Mexico, that’s quite a claim.

For those of you who don’t know, a cenote is a natural pit or sinkhole formed from the collapsing of limestone bedrock that exposes the ground underneath, and they are dotted all over Mexico with some thinking there are up to 10,000 in the country.

With rain water filling these holes, what’s left are these beautiful pools of blue and green with crystal clear water. This makes the cenotes one of the best places in the world to go diving (trust me on that), and there aren’t many places where you can explore the caves and the underwater world quite like this. 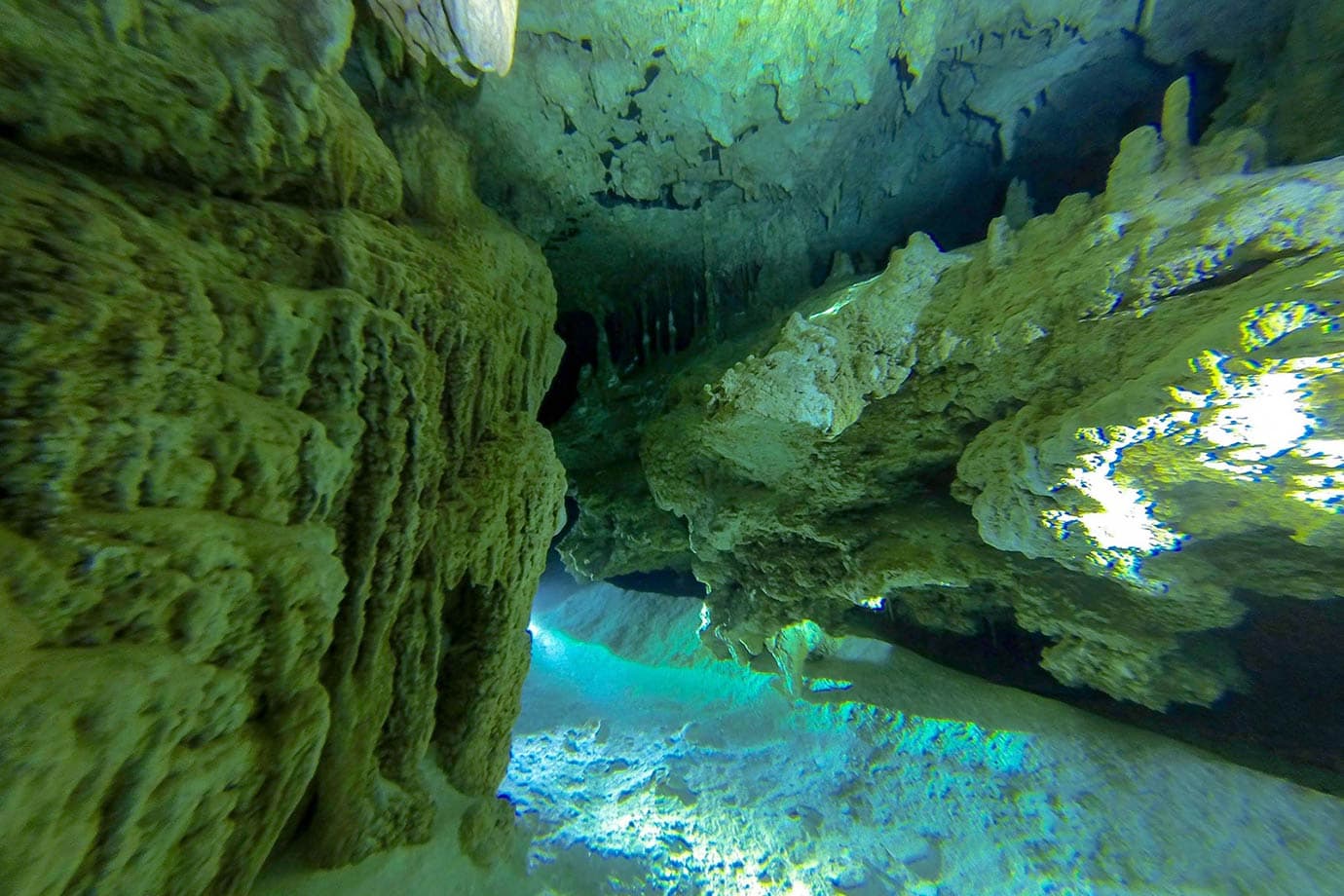 The Mayans revered the cenotes for a number of reasons, but to them they were a source of water in extreme climes, so the perfect place to build a community around. They were also seen as a gateway to the underworld, a direct link to the afterlife and therefore a place to worship. The name cenote literally translates to ‘sacred well’, and that’s as good an indicator as any to what it’s like to dive here.

As soon as you lay eyes upon the cenotes in Mexico it is very easy to understand why the Mayans were held in such rapture by them; each one seems older than time, completely unchanged from when people first came to this land. They are shrouded in mystery and reverence, and each one seems to emit its own energy, a place that draws people from far and wide. 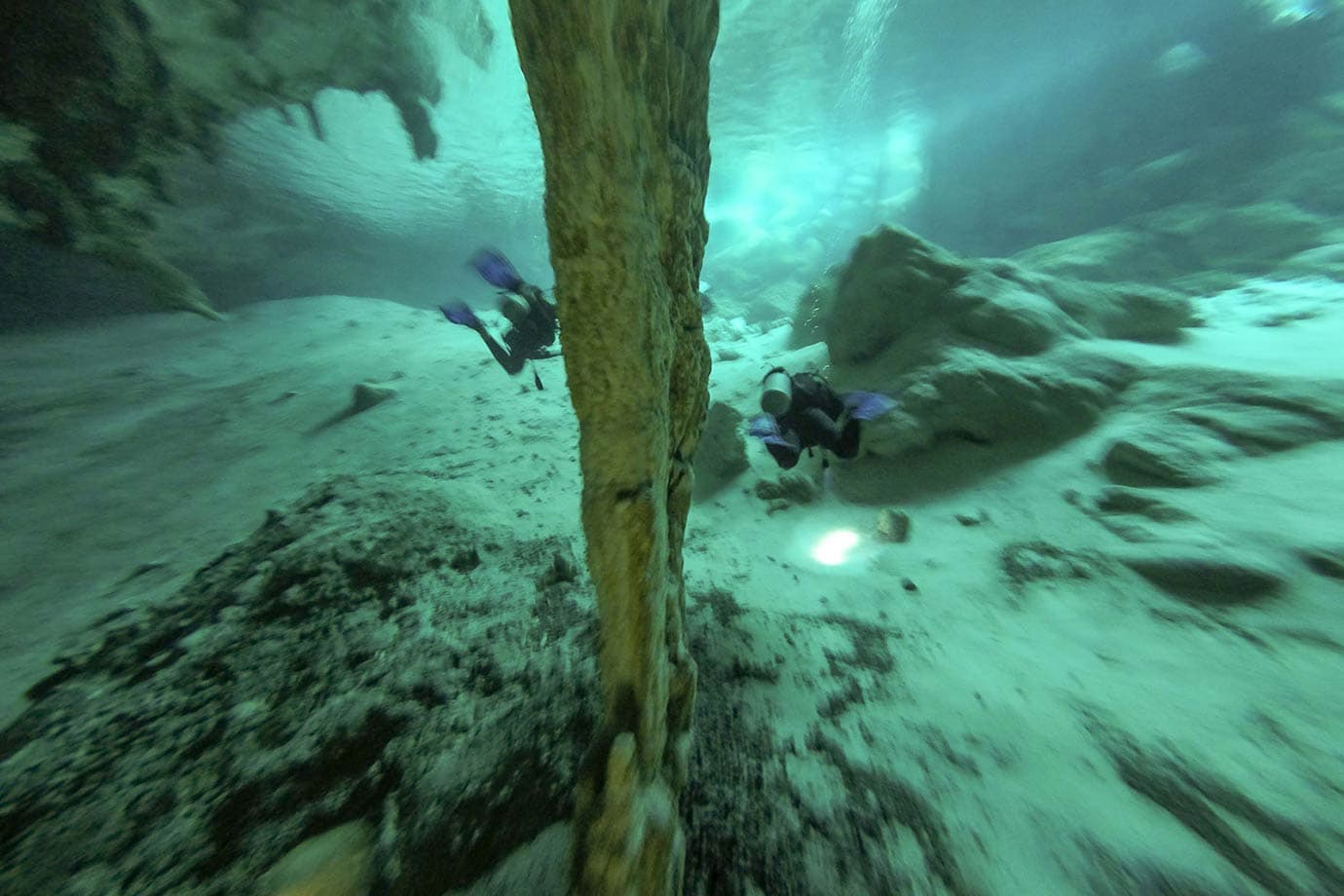 Dos Ojos, otherwise known as Two Eyes, gets its name from two pools of water that’s separated by a looping cave system; one eye is blue and clear, the other is dark and cavernous.

Dos Ojos is one of the largest cenotes in the world with a depth of 119m and the water is exceptionally clear here as a result of rainwater filtering through the limestone rock. 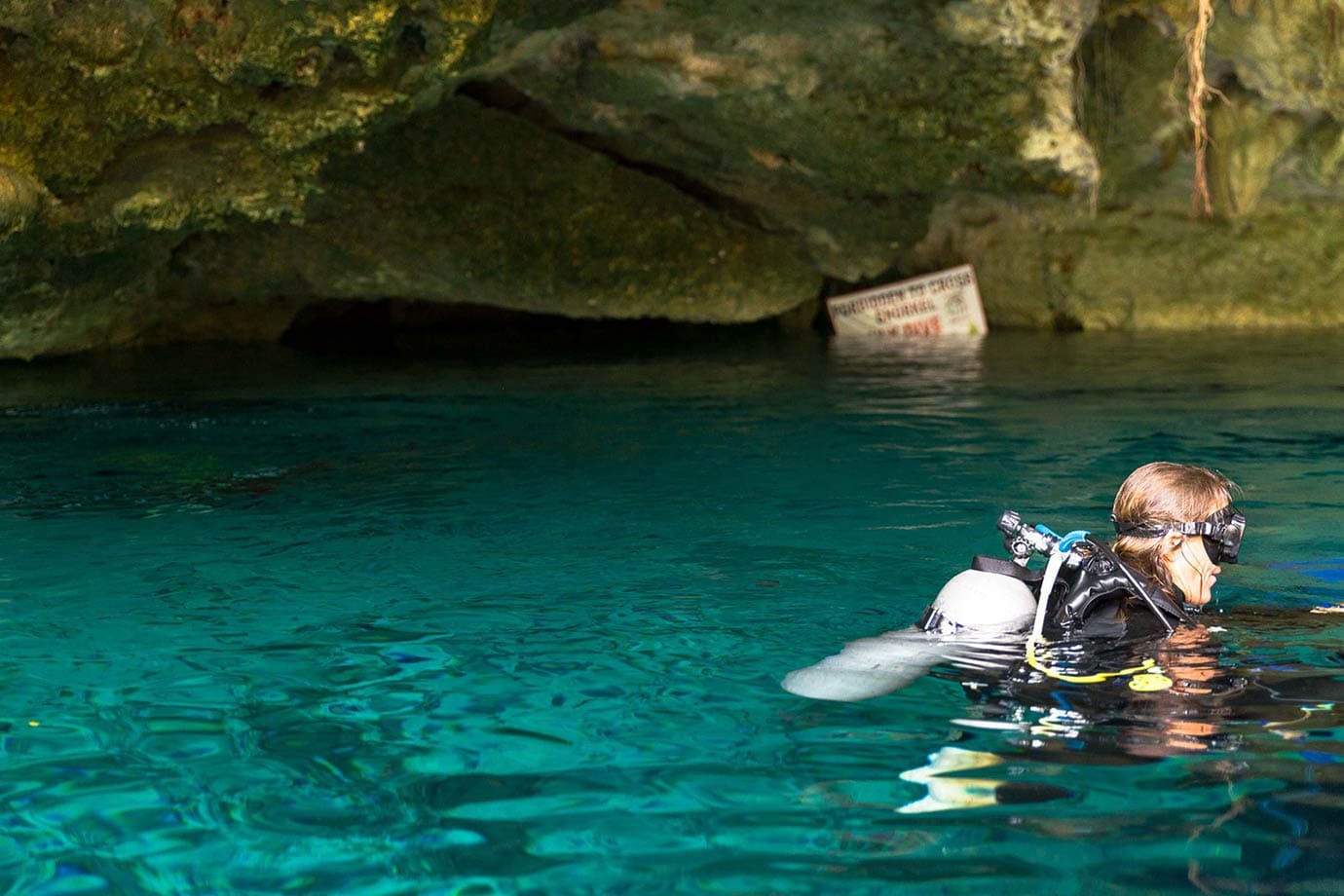 At Dos Ojos the far majority of people are snorkelers, but we were there for the diving.

Unlike Angelita the day before, Dos Ojos isn’t a deep dive – we rarely went lower than 10 meters – but it was amazing exploring this underwater cave system.

When you’re diving here there’s actually a string path for you to follow, and even though you have clear visibility it’s paramount not to veer from the line (otherwise….) 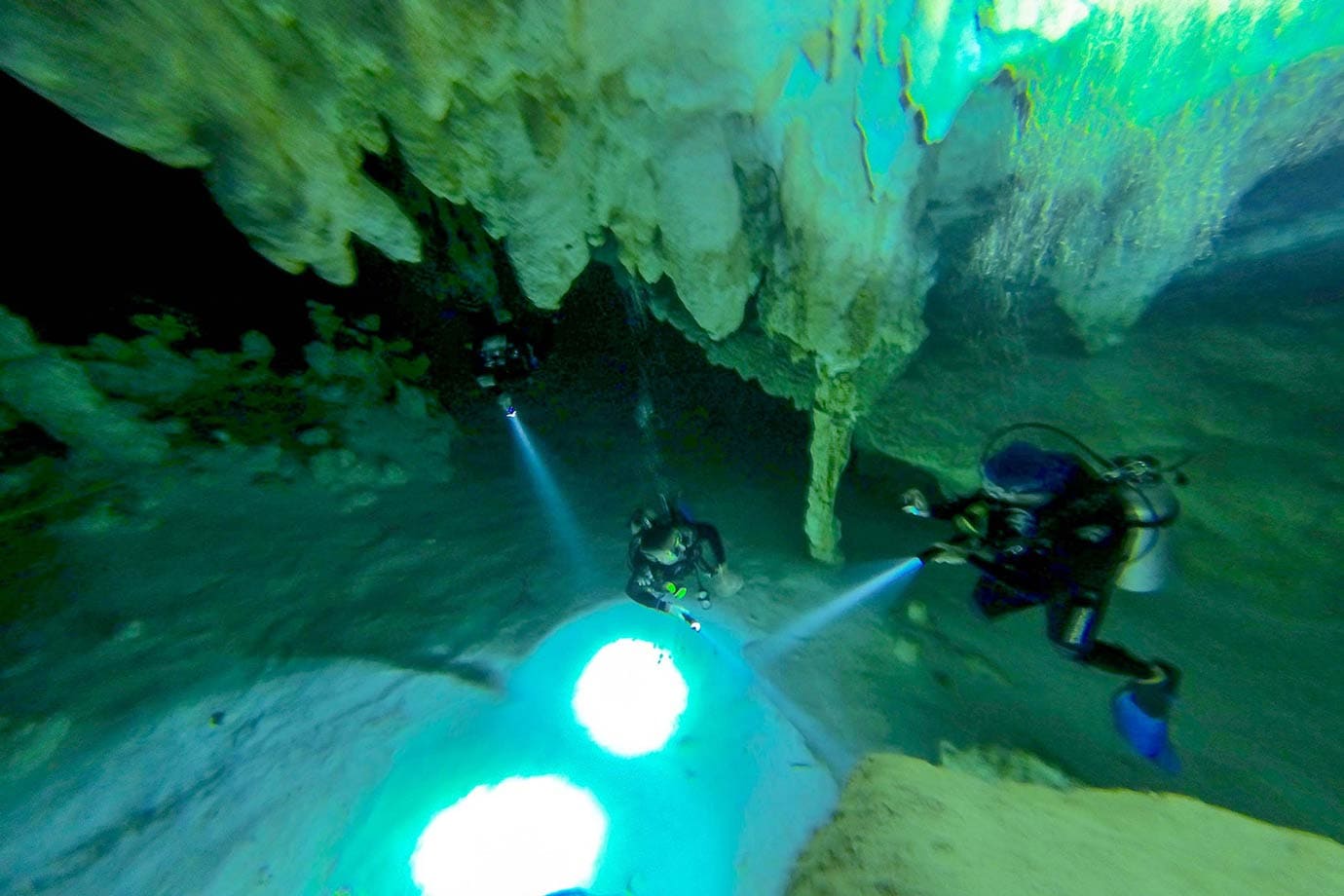 Everywhere you look there are caves going off left and right, and but the one thing that catches your eye are the stalactites. These were formed before the cenotes were filled with water, and with some huge stalactites they are a visible symbol of just how old each cenote is.

For me, the best bit of diving Dos Ojos was surfacing in the Bat Cave, a cavernous space that is equal parts mystical and eerie. There, we spoke with Manuel, our dive guide, all about how the Mayans still worship the cenotes and at how new ones are still being discovered each year. This truly is an explorer’s paradise. 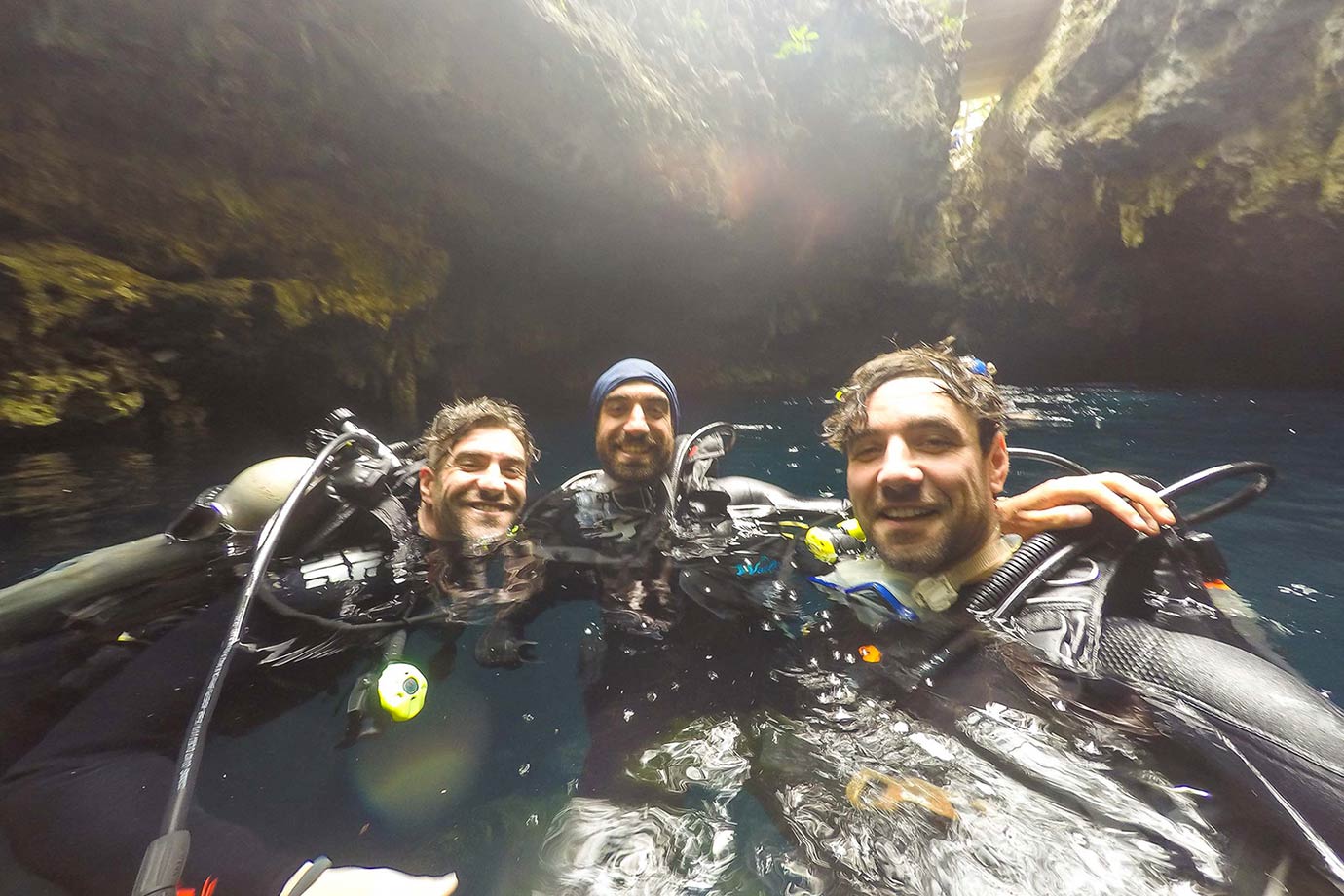 Considering Dos Ojos is one of the most popular cenotes in Mexico I thought there would be loads of divers, but once we got underwater it felt like we were the only ones down there.

With the two eyes and the Bat Cave, I think it’s fair to say Dos Ojos lived up to its reputation as one of the must-do dives in the Yucatán Peninsula.

A two tank dive at two different cenotes in the Yucatán Peninsula with Yucatan Diving & Travel costs US$140 and includes all transport and equipment. That also pays for Manuel, one of the best dive guides I’ve had. Seriously, I can’t recommend these guys enough.

As with all of the cenotes in Mexico, the Maya own the land. Therefore you have to pay an entrance fee to be allowed to dive here. At Dos Ojos, the entrance fee is 200 peso.

If you want to check out some of the other cenotes then check out this awesome blog on the best cenotes near Playa del Carmen – now I want to explore all of these!

The main reason I love scuba diving is for the adventure, you don't know what it may happen or what you may find below the water surface. In the past years I've taken a lot of pictures which I store in the dive site logbook, along with all my diving logs.

I completely agree with that! There's nothing quite like diving, especially in a place as beautiful as the cenotes!

Oh wow! This looks incredible! This wasn't too far off from where we stayed in Tulum? Did you go the resort route or Airbnb? We found the rates for Airbnb were cheaper and we got to cook our own food for super cheap...so it was perfect!

We went down the AirBnb route too! Definitely much cheaper, and was nice having the option to cook or go out to restaurants too. I need to go back to Tulum though - so many dive sites around there that I would love to visit!