Skiing for the first time in Zermatt, one of the most beautiful ski towns in the world 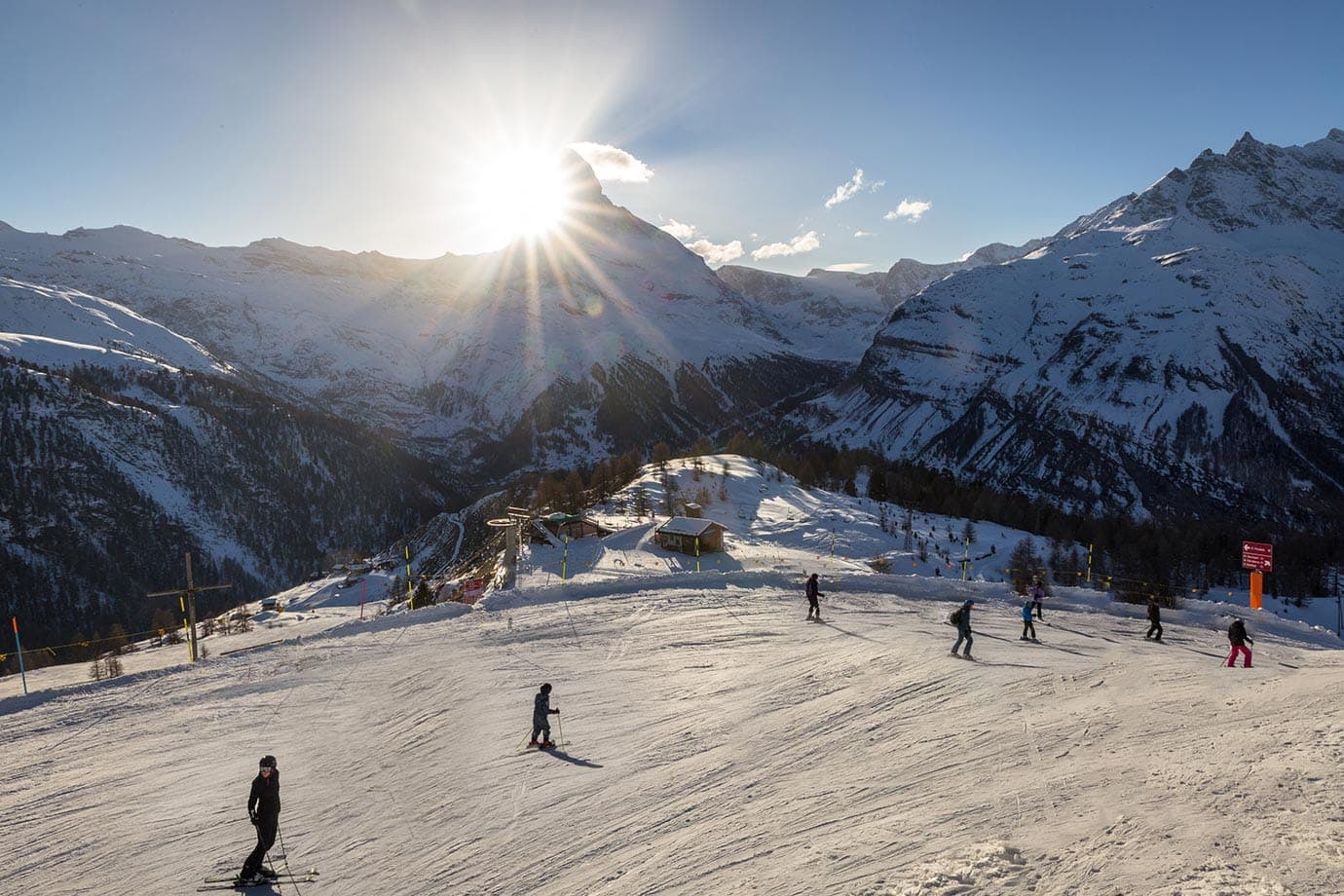 I couldn’t help but notice that a three-year-old a quarter of my size was skiing in and out of some cones in the baby park while I could barely put one foot in front of the other, though from what I understand, this is what it’s like for every adult learning to ski.

To be honest with you, I was just happy to be standing at the top of the slope to say I’d been skiing, and I hadn’t even put on my skis yet!

Still, as I looked around with the Matterhorn in front of me I couldn’t imagine learning to ski in a place more beautiful than this. 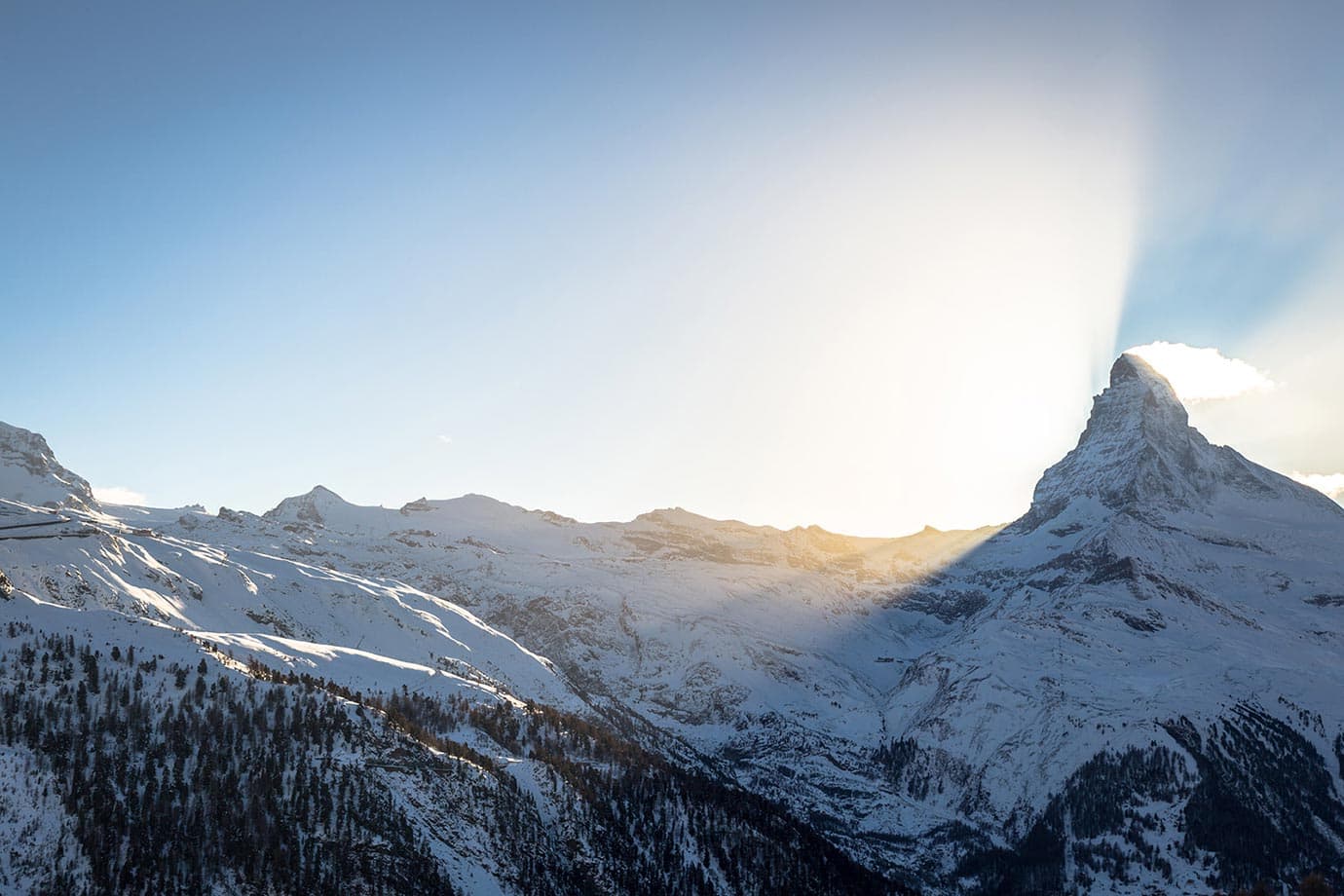 Earlier that morning I headed off to the Alpine Ski School Zermatt just on the edge of town.

There I met Max, my instructor for the day and the man who’d teach me to ski, and most importantly, teach me how to stop while I was in Zermatt.

As we were preparing our equipment and putting on our gear, Max went through what we’d be doing for the day. One of the first thing he asked me was “what do you want to get out of your first lesson?”

Without a hesitations thought I said “I want to ski. I don’t want to be stuck on the baby slope with the kids and the toddlers, but I want to actually ski.”

Max smiled back at me. “Don’t worry. We’ll get you onto a blue slope in no time.” 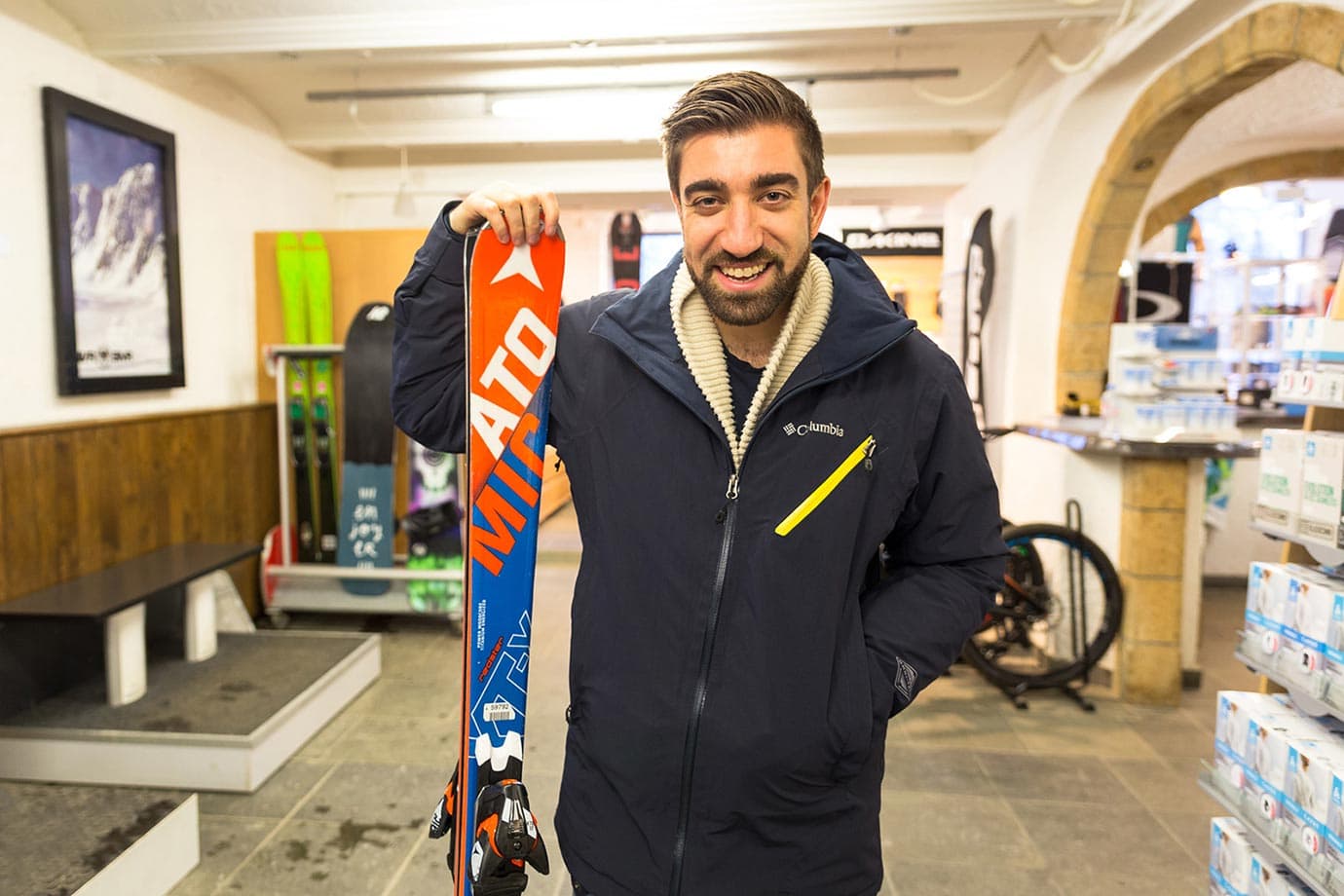 Before I could start skiing first I had to get to the top of the piste.

For that we caught a little electric taxi to one of the main slopes and then it was a five-minute journey straight to the top.

From there, it was a short five-minute waddle to the baby slopes where Max put me through my paces. 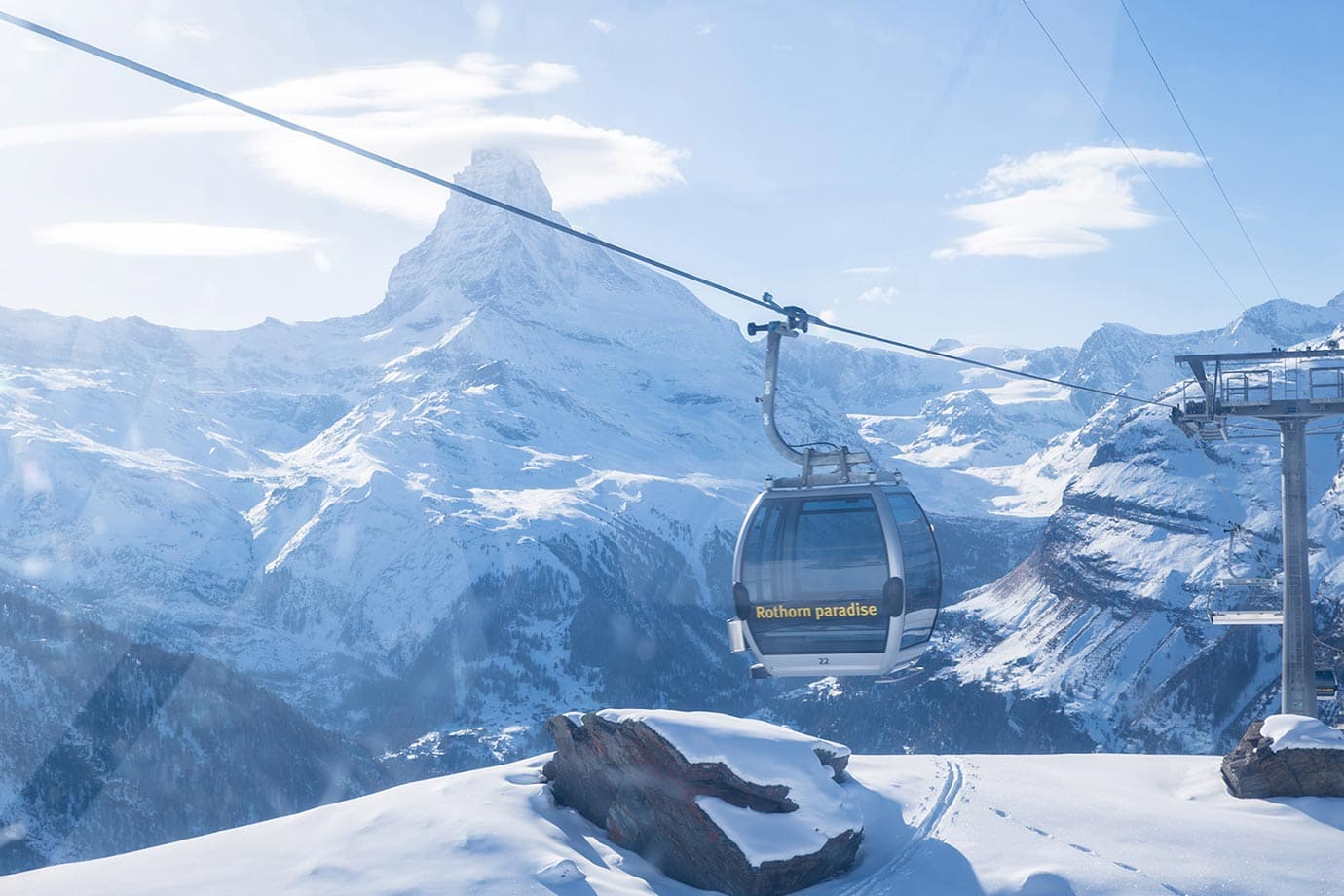 The one thing Max really wanted to stress to me was that skiing was down to two things – confidence, and execution. Everything you do you’ve got to execute with confidence.

At this point I’ll also add in my own advice – whatever happens, happens. If you fall over, that’s okay. If you need a break, that’s okay too. As long as you’re in control of what you want to do that’s the main thing. 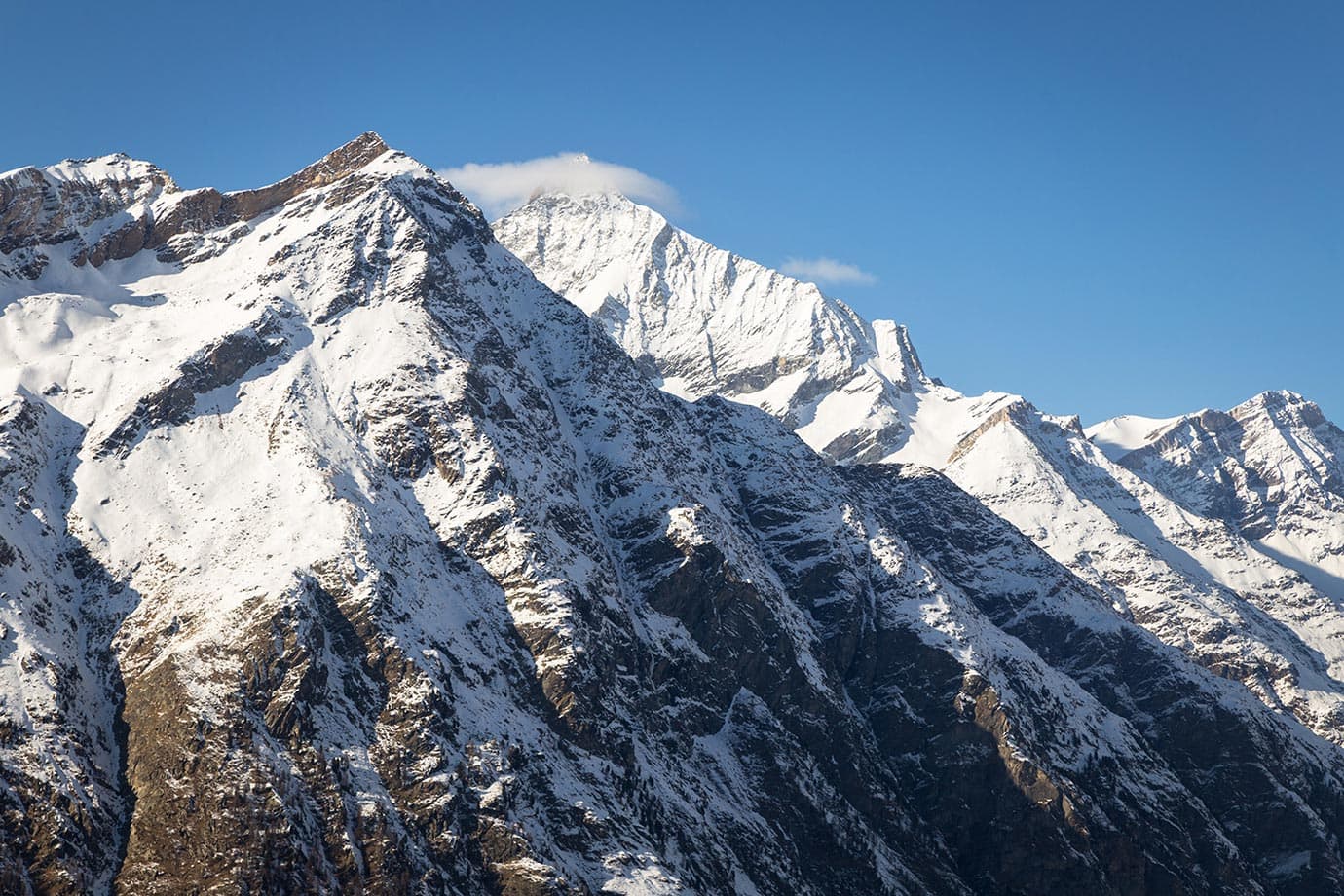 Anyway, my first lesson with Max was learning how to carry my skis (very important) and how to put them on. I didn’t realise how much force was needed to clip into a set of skis – you really need to stomp your foot downwards for them to be secured tightly.

At first I just walked around with one ski on getting a feel for it under foot.

Once I had done that for five minutes I graduated to two skis, and again just walked and slided around for a bit getting a feel for the movement and for gliding over the snow.

Once Max felt like I was comfortable in two skis he taught me my most important manoeuvre (and the only one I really need to learn) – the infamous snow plough. 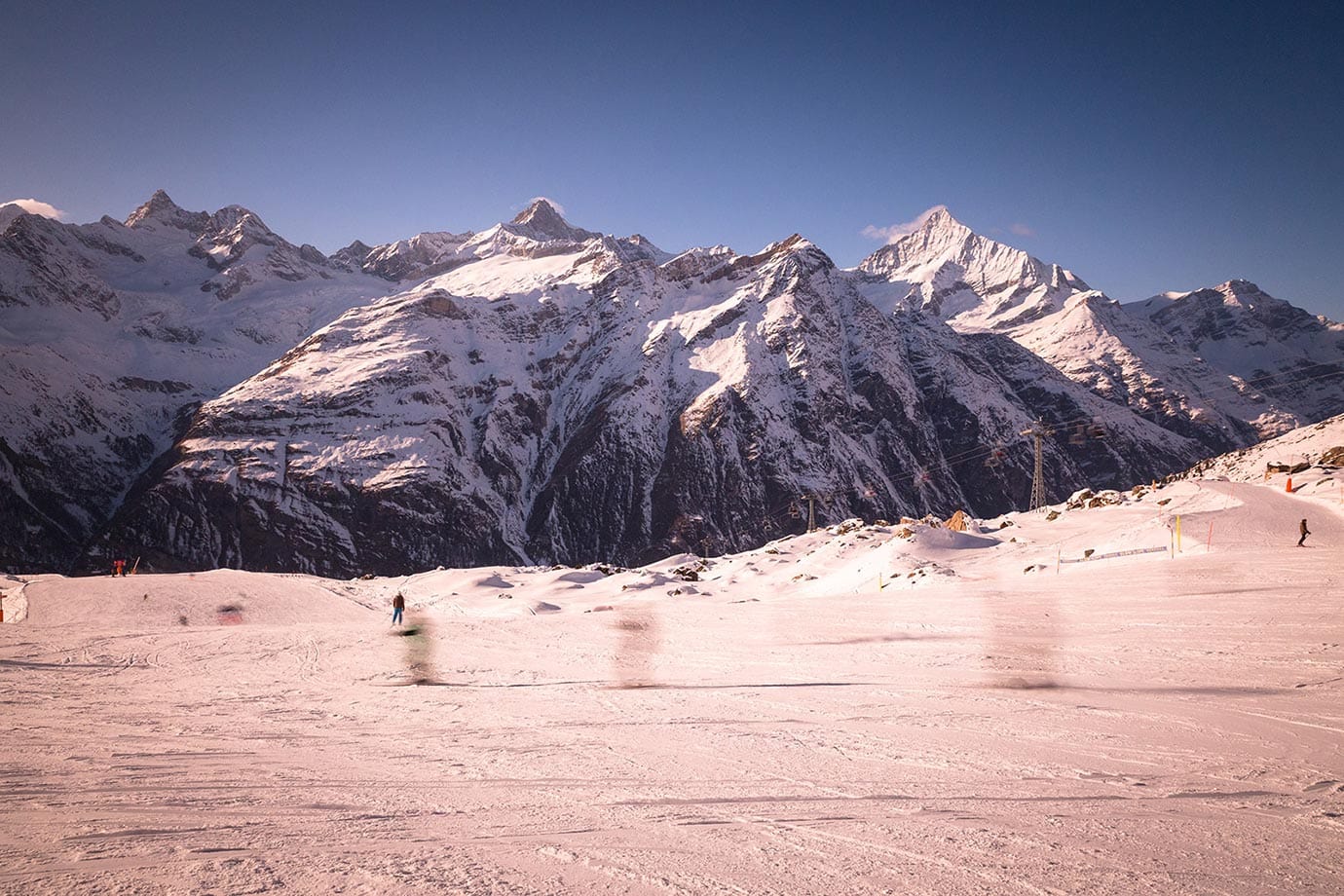 For all newbies, the snow plough is how we stop, a very important skill when you’re going down a mountain!

To do a snow plough you push your legs out to the side to make a V or a triangle – the edges of your skis cut into the snow and slow you down. This is also a way of controlling your speed.

Here’s a little video on how you snow plough:

For the next hour or so Max and I kept on practicing the snow plough at different gradients and at varying speeds to ensure I had mastered it.

Again, it was all down to confidence. The more I put into it, the more I forced my legs apart into a triangle, the more confident I felt on the snow. 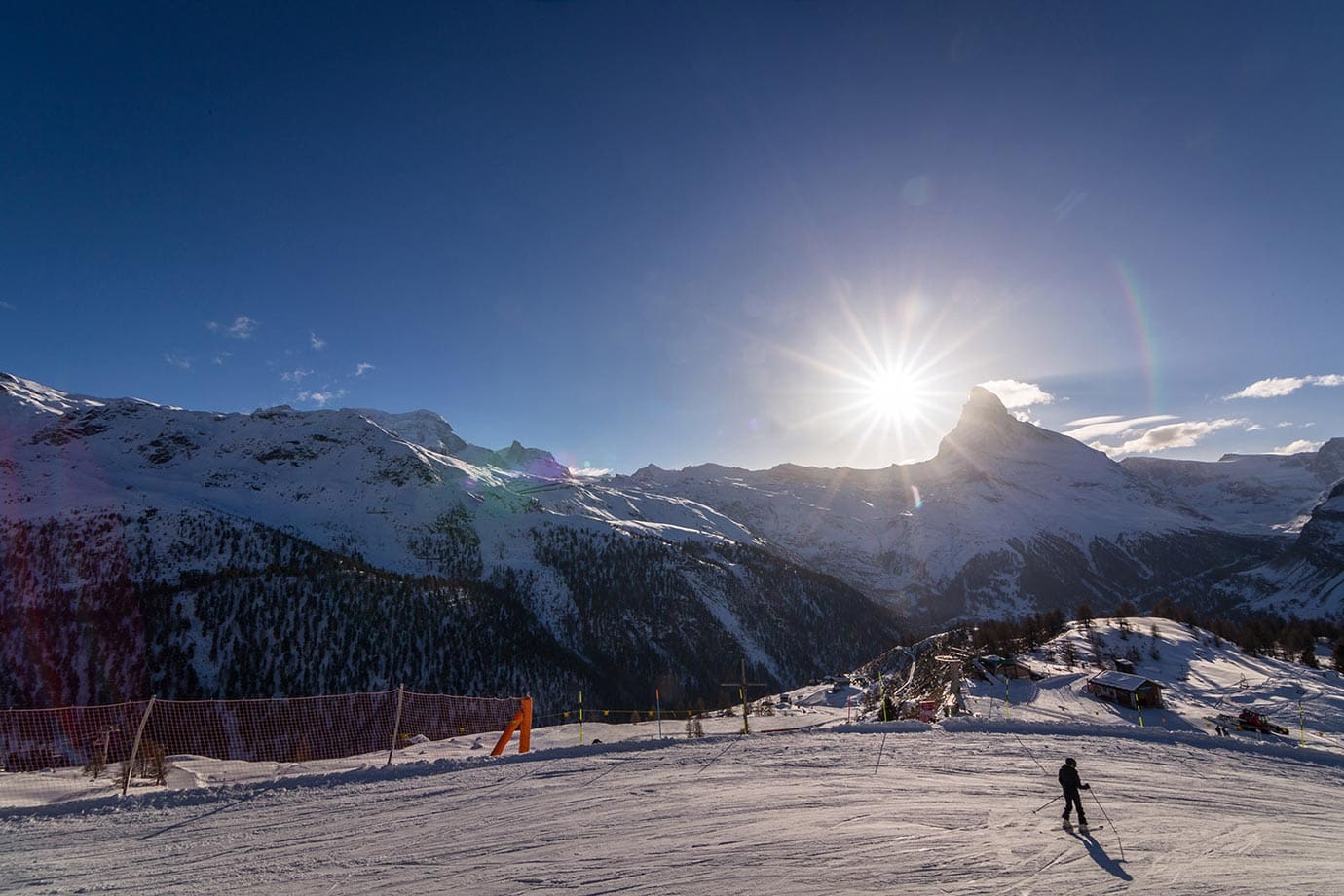 At no point did Max teach me how to turn. That sounds like a shocking admonishment, but it’s true.

He said you don’t need to consciously think about turning. If you focus on the slope ahead of you and point your head in the direction you want to go, your body will automatically compensate for that and turn for you.

I couldn’t believe it actually worked, but I was soon looking left and right and I was slaloming like a pro (or at least I thought so, anyway). 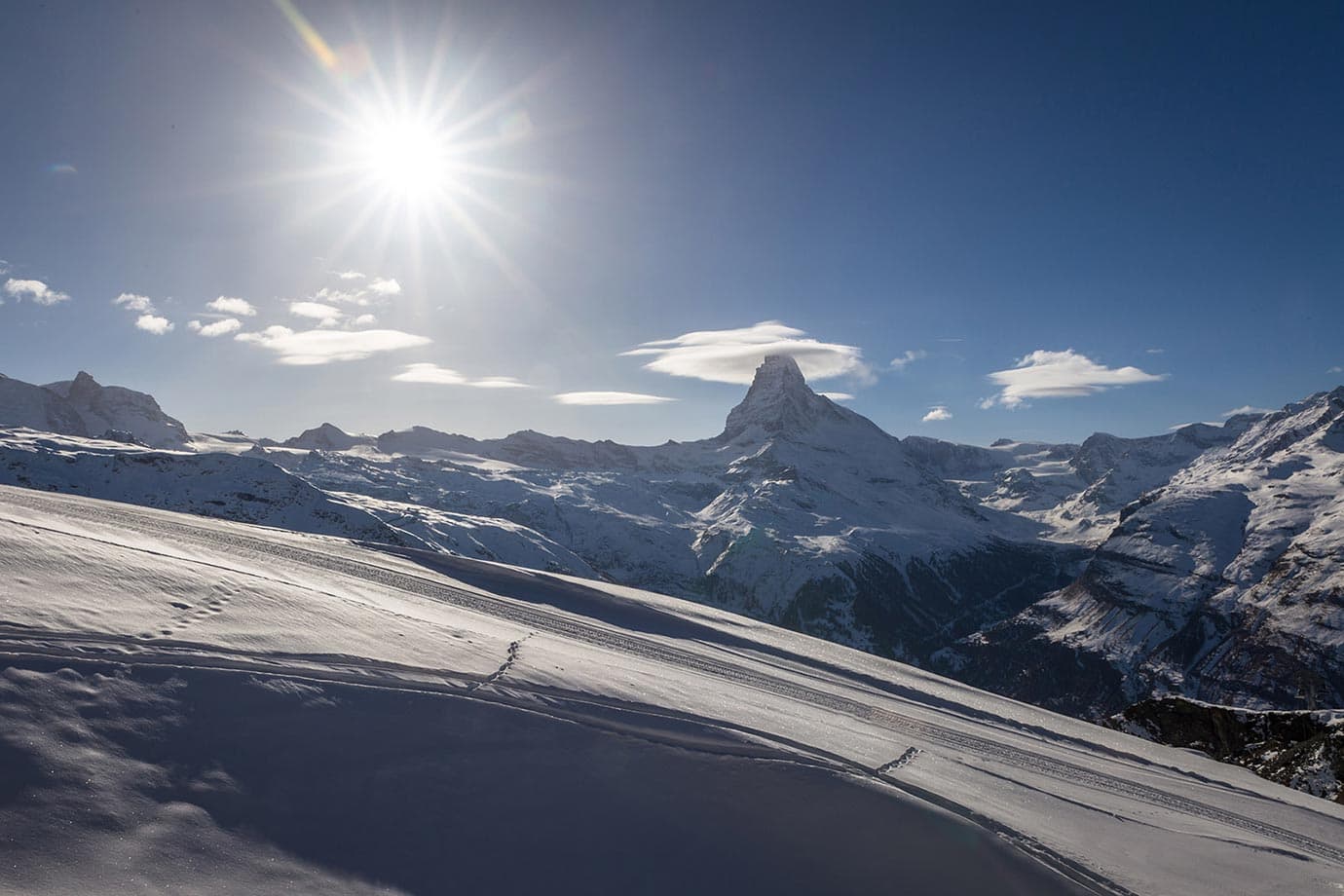 Graduating to the blue slope

Just as Max promised, after only two hours of learning how to ski on the baby slope we were soon walking to the blue slopes of Zermatt.

The blue slopes are obviously the beginner slopes, but it felt amazing actually skiing on these like everyone else (and I have to say, it was great leaving all the kids behind. I’m a man and it felt manly to be on a proper ski slope!)

For the next hour Max and I skied the blue slopes just getting used to the run at different speeds.

From that point Max didn’t teach me too much else, he just reiterated a few points, giving me a few instructions and telling me to go for it.

I’m not about to say learning to ski is easy. It’s not. It takes a lot of time and dedication to master, but that’s the beauty of it.

Even though I only had one three hour lesson, I still managed to graduate from the baby slope to the blue slope, and that in itself was such a rush. I achieved the one thing that I wanted to do.

Am I skier now? Far from it! I still struggle to even walk around let alone ski, but I would love to go again. Like with a number of sports, the amount of time and effort you put into it, the more you get out of it.

I was so surprised at how much I learned it just a day, and it really gave me the thirst to go back day after day and practice everything Max had taught me.

If I had to give you one piece of advice it’s throw yourself in at the deep end. Try not to be too nervous or scared but relish the challenge. You never know, it might just be the start of your next passion!

For me, I have to say it really is a sport like no other, and there aren’t many places more beautiful to learn it in than Zermatt. 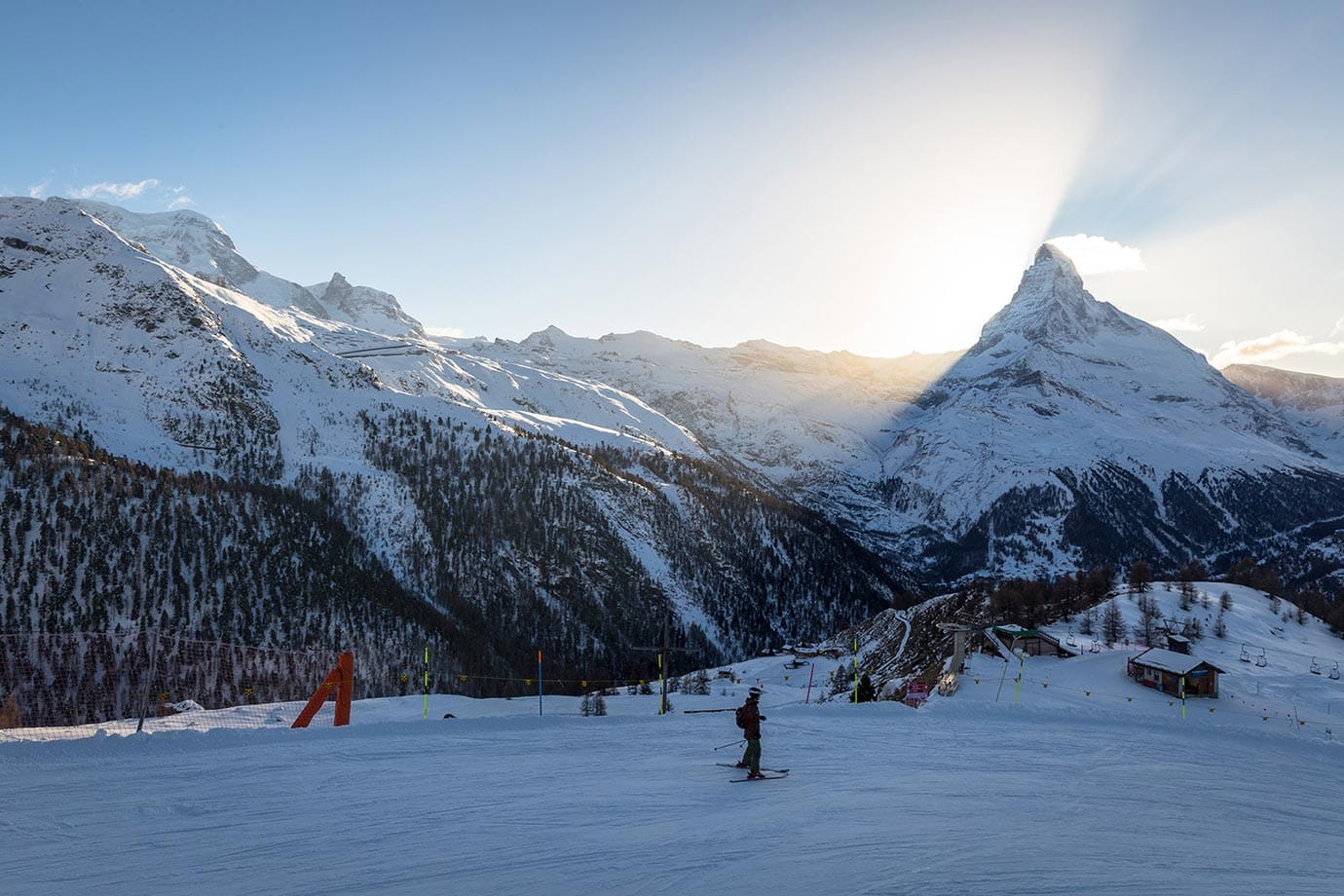 I flew from Manchester to Geneva with Jet2 (which is a new route they’ve just launched), and then caught a taxi up to Tasch (which took two and a half hours).

There aren’t any motorised cars in Zermatt (they only have small electric taxis), so from Tasch we caught the train (CHF8.80) to the centre of the town, and from there walked to our hotel.

Zermatt is tiny – you can easily walk from one end to the other in 10 minutes, so if you get to the train station you’re almost guaranteed to be within walking distance from there.

Also, if you’re looking for an unforgettable ski holiday then check out these luxury catered ski chalets in Zermatt. Tempston Luxury offer some of the best ski chalets around with a concierge service too so you’re really looked after! 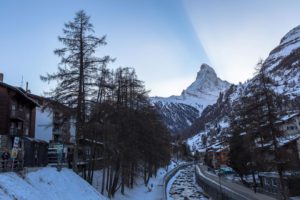 Sunset behind the Matterhorn in Zermatt 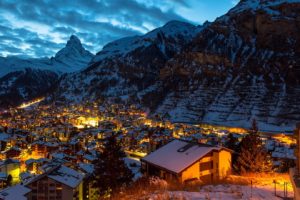 The view of Zermatt at night 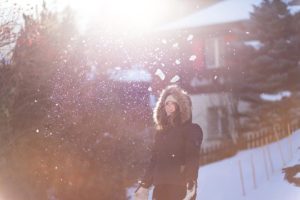 Chloe playing in the snow 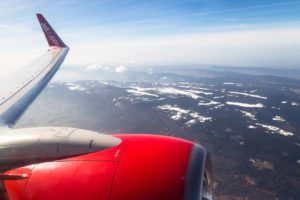 Flying with Jet2 to Geneva 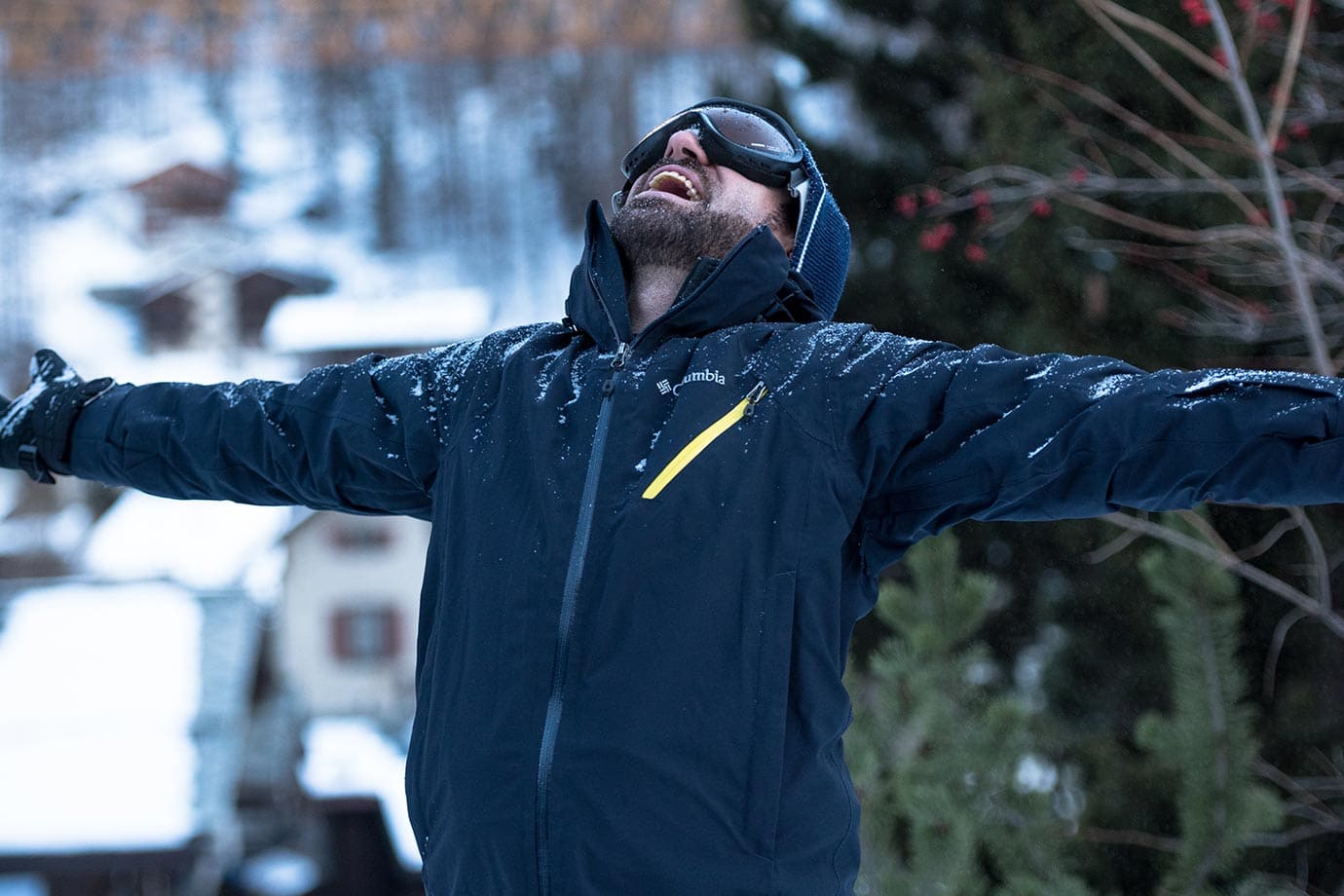 If you’re heading to Zermatt but you don’t want to ski then make sure you read Wanderlust Chloe’s guide on the top things to do in Zermatt for non-skiers.

Learning to ski in Zermatt was part of a press trip organised by Jet2 promoting their new route from Manchester to Geneva. As always, all views and opinions are entirely my own and without bias.

Have you ever been skiing before? If so, where did you learn to ski? Anyone learn to ski in Zermatt? Let me know in the comment box bellow! 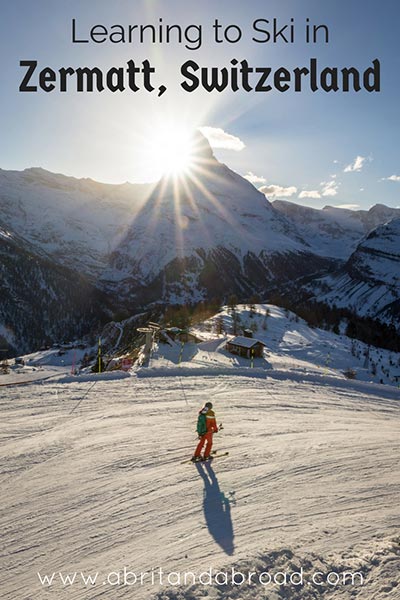 Loved reading about your experiences! Funny we were on the same trip but doing such different things. Congrats on losing your ski virginity! Cx

Thanks! Ah, I loved skiing so much! I can't wait to give it another go at some point! When are we doing it together Chloe?