Nicaragua *might* just be my favourite country in Central America – from exploring Ometepe to volcano boarding, here’s what backpacking in Nicaragua is really like though

I would be lying if I said I was always comfortable on two wheels, but this is what backpacking in Nicaragua is like. It’s very real, it makes you feel alive.

I had a few less than perfect experience on bicycles as a young teenager (one of which ended up with me passed out from heat exhaustion in a blackberry bush).

When I attempted to ride a scooter as an adult on a camping trip near Harrison Hot Springs in British Columbia, Canada, all my toppling over came rushing back to me.

As I cruised down the main street, I quickly realized that I couldn’t turn a corner. So I stopped. Mid-traffic. And that was the end of my scooter career… until we visited Nicaragua.

See what we got up to while backpacking in Nicaragua:

Visiting the island of Ometepe we quickly decided that renting scooters would be the best way to see the most of this fairly small island on Lake Nicaragua. The island itself is formed from two volcanoes, which gives it the shape of a top heavy figure eight.

It just so happened that the island had just seen an epic storm, complete with flash flooding that had wiped out many of the dirt roads. Did that stop us? Of course not. As I said, this is what backpacking in Nicaragua is all about.

We encountered some pretty rough riding at times, but otherwise it was smooth sailing. We drove under lush, green canopies and stopped at a secluded beach just before heading home.

The sun was setting as we drove back into town which made for one of those magical travel moments. 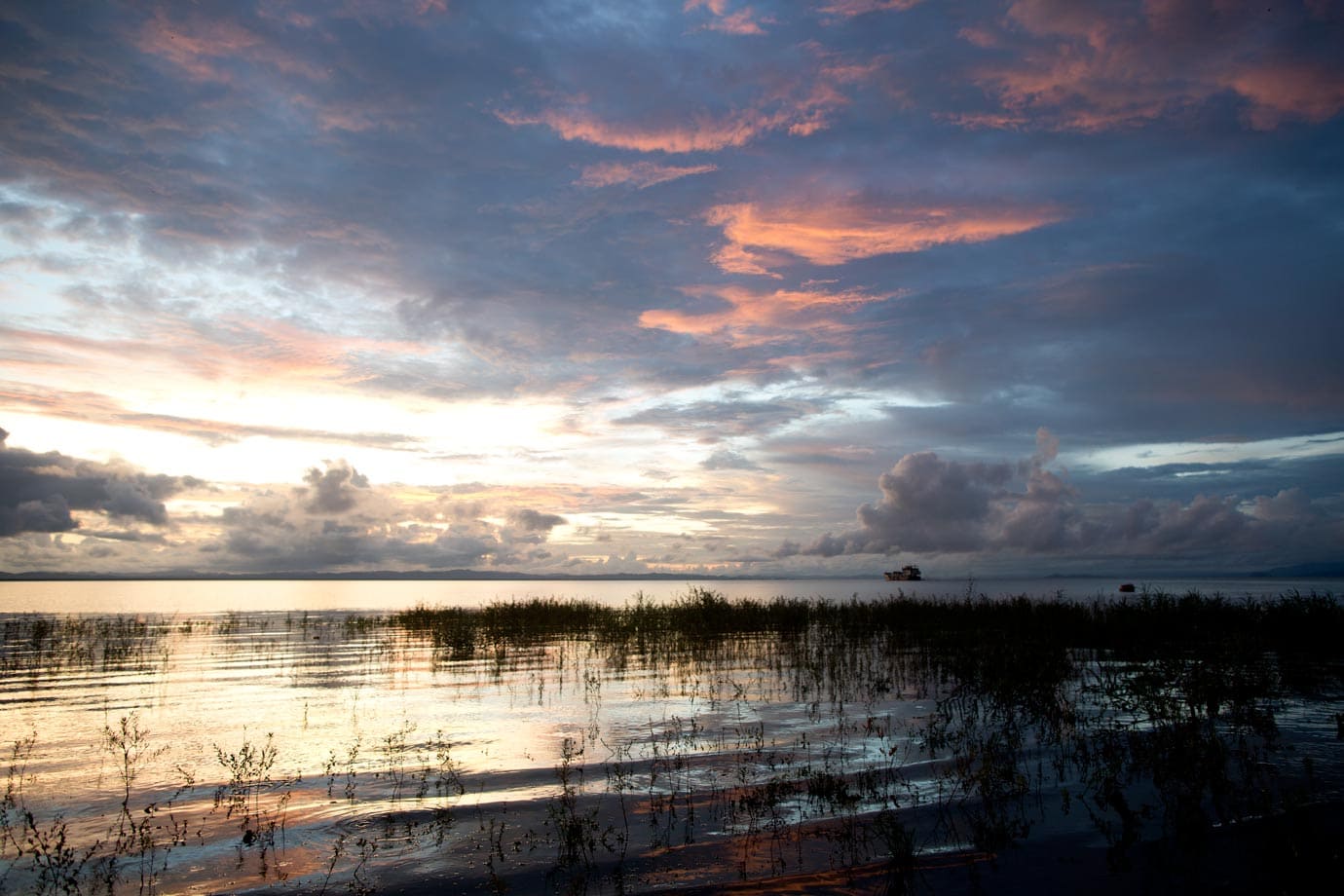 Later that evening over dinner and cards, another storm began and we found ourselves running home to our hostel through the street, which had basically been turned into a river.

Other than being a bit damp on the ferry ride back to the mainland, we were happy to have made the trip over. It was wonderful to sit on our scooters with the freedom to see this gorgeous island.

If you’re backpacking in Nicaragua, make sure Ometepe is on your list of places to visit – it really is one of the highlights of travelling here. 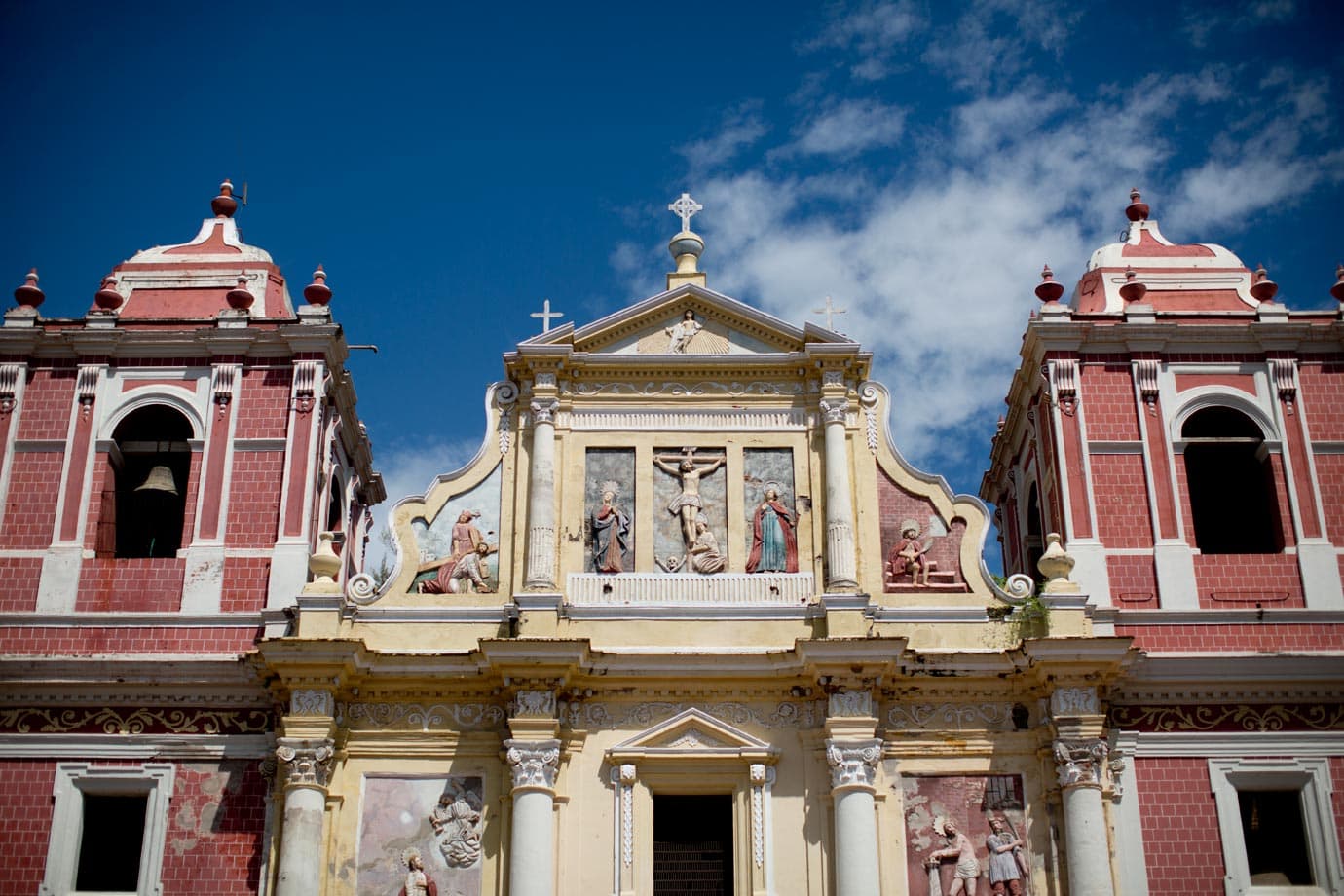 A look at lovely little Leon

A stark contrast to the island life of Ometepe, León is a small but vibrant city with lots going on.

As much as we enjoyed the restaurants, nightlife and food stands in the streets of León, we came to visit Quetzaltrekkers and hike a volcano.

Everyone we’d spoken to who was backpacking in Nicaragua all said the same thing – you have to go hiking with Quetzaltrekkers. They couldn’t be wrong, could they!?

We had heard from multiple sources that they were the ‘go to’ for treks (more on that from Macca), and based on our schedule we were able to sign up for an overnight camp on El Hoyo. If we had had more time, and the calendar lined up, I would have loved to do the full moon hike but maybe next time! 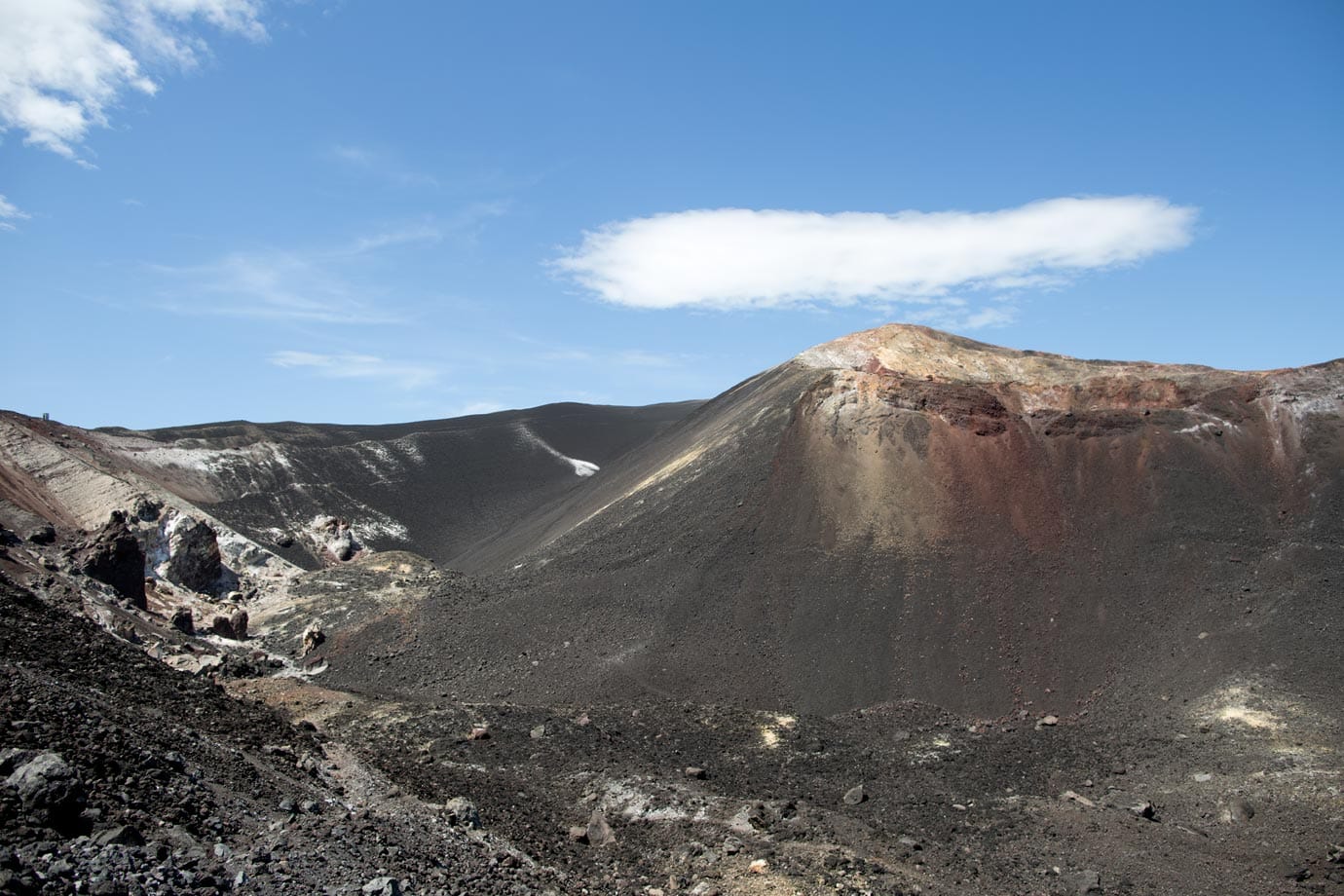 Our first stop of the day was Cerro Negro – a little mound of black sand fit for flying down on a sandboard. When we reached the top, our shoes sufficiently filled with black sand, we suited up to ride our boards down.

We were given instruction on how to go faster or go slower, and I had visions of tripping and tumbling down the mountain Homer Simpson-style. Luckily, that didn’t happen. Instead I rode down, feeling in control and like I was a kid on a toboggan again – all the while filling my toothy grin, hair and shoes with more black sand.

There was more volcano climbing in store for us after that. After we rinsed off in an outdoor sink and had a quick snack, we set out on our overnight hike; the one we had been warned had an “extremely laborious” first ascent. 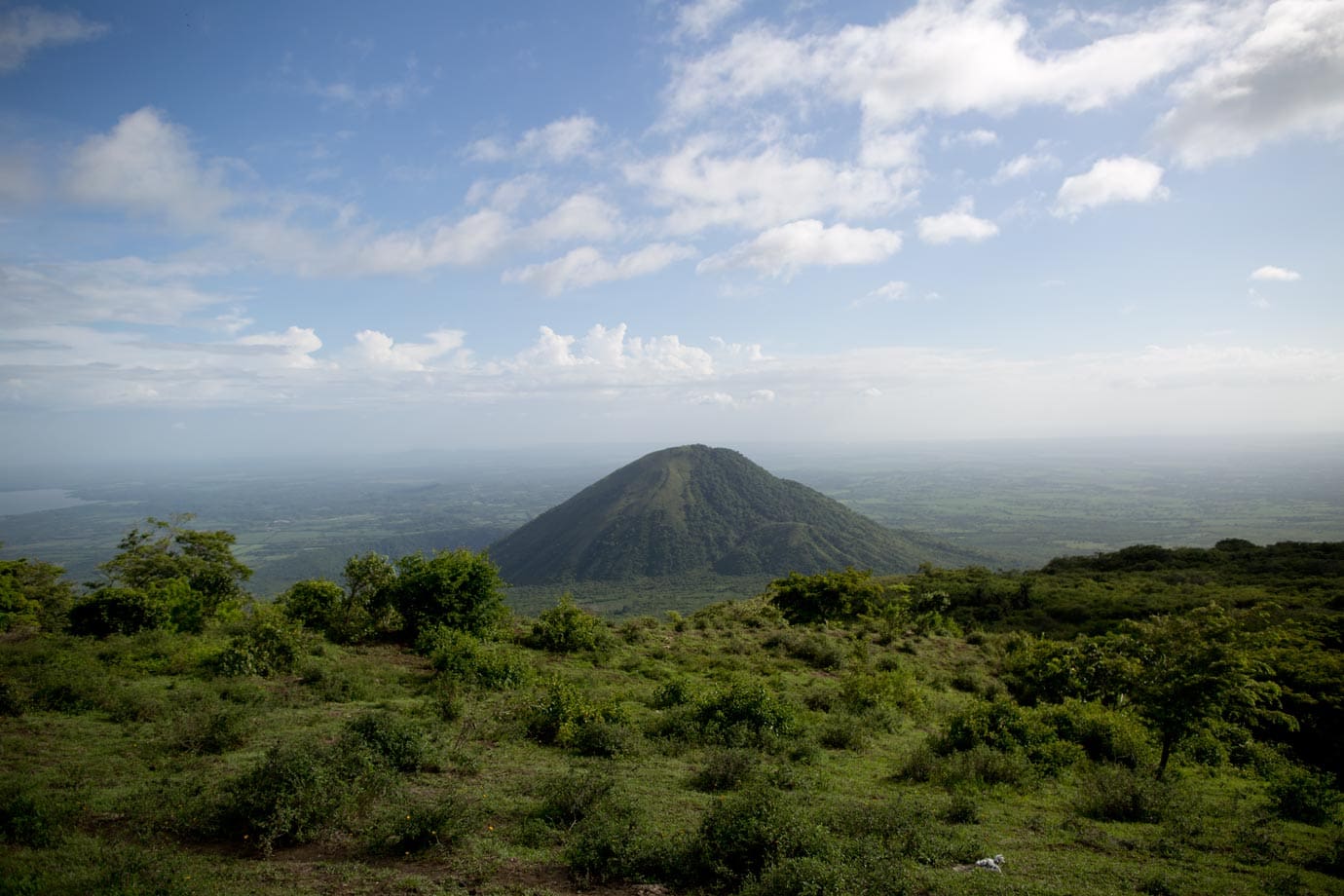 Hiking to El Hoyo in Nicaragua

For the first hour it felt like we went vertically up, through loose sand, with backpacks digging into our shoulders. It was certainly strenuous, but even after just a half hour of hiking, the views were unreal. We also had the luxury of stopping to take breaks for the people who were a bit slow (me).

We stopped for lunch along the way – and met a band of merry (ok they were more stoic than merry) gentlemen who seemed to pick the same lunch spot as us. After bidding them adieu, we set out for the second half of the hike, which seemed like nothing compared to our morning.

By the time we reached our camping spot, it was “magic hour”. The sun was low, glowing orange and pink and creating shadows on the landscape below.

The view was breathtaking; two other volcanoes in the distance, with a crater like tucked in beside and all the land in-between. Brian took one of his favourite photos there.

When I took off my runners to see my dirt caked, calloused feet, it was totally worth it.

Nicaragua really brought me back to being a kid again: getting dirty, flying down hills, camping under the stars – not to mention scooting around with the wind in my hair! This is why I just love backpacking in Nicaragua!

The difference backpacking in Nicaragua compared to El Salvador

Coming down from the laidback and easy-going pace of El Salvador where we had our own vacation inception (that does make sense, trust me), Nicaragua represented a country where we went back to basics, back to pure backpacking.

Pretty much everyone we met who travelled through Central America said the same thing, that of all the countries they went to, Guatemala and Nicaragua were people’s favourites.

As we had already travelled to Guatemala, a country that certainly lived up to its reputation, that only seemed to heighten our sense of excitement to finally be backpacking to Nicaragua.

As soon as we arrived in the little town of Leon, I think the three of us knew we were in for an unbelievable time. 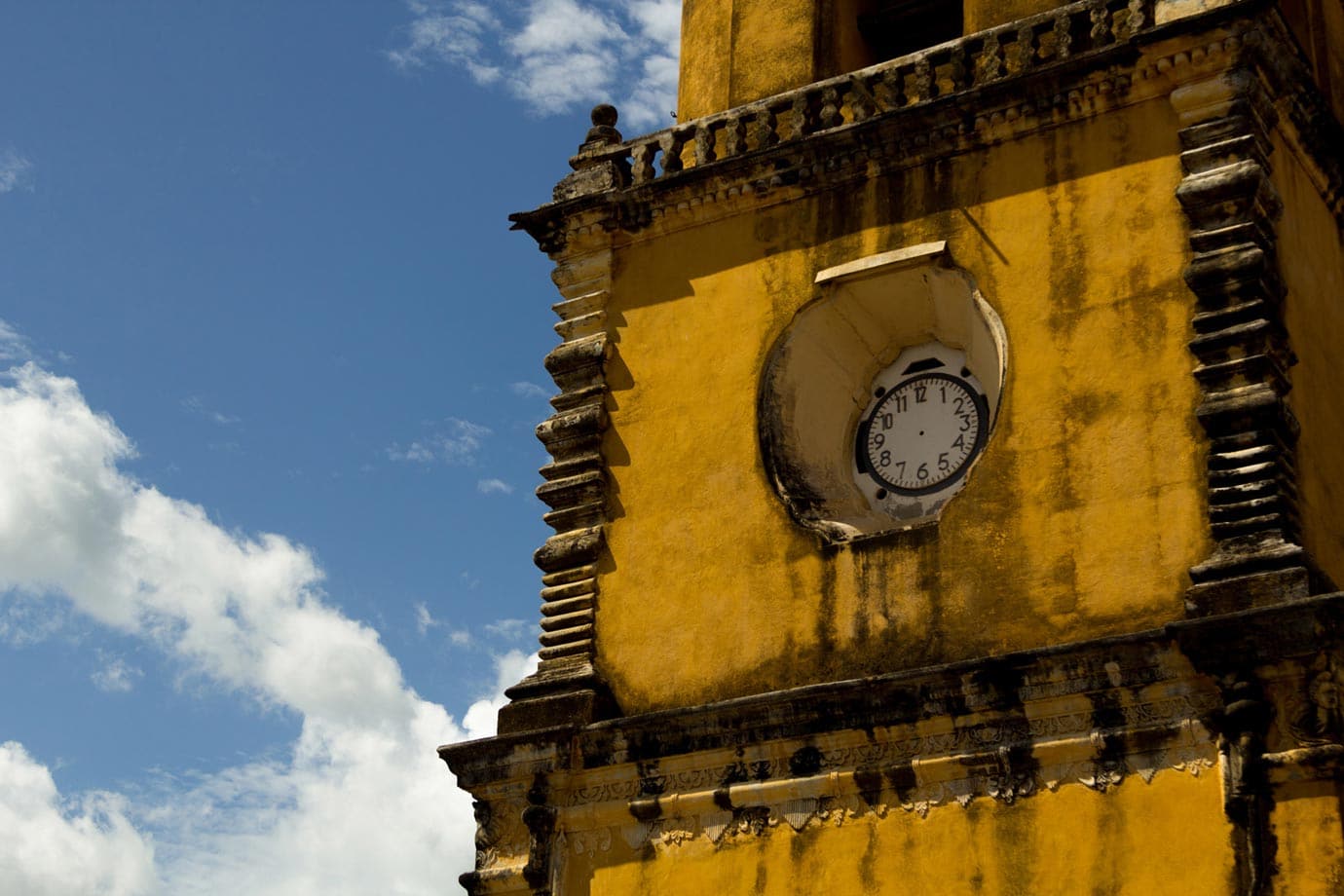 Food and drink in Leon, Nicaragua

After being on the beach of El Cuco for a few days where all we saw was the surf, the hostel bar and not much else, it felt good to be back in the land of the living, and we set about to explore all the little side streets and colourful cafes that Leon’s become famous for.

It’s hard to describe, but we didn’t really do anything in Leon. I felt like we drank a lot of cervezas, ate some damn fine food, and just immersed ourselves in the Nicaraguan culture, soaking everything up going on around us.

At times it felt like a lot was going on, when in truth nothing was, and that gave Leon a unique atmosphere that’s hard to replicate anywhere else, but I know we all felt very comfortable there, but as I said, we drank a lot of cervezas so perhaps that’s got something to do with it.

Anyway, one of the reasons we were in Leon was Queztazltrekkers. In terms of hiking, these guys came very highly recommend to us from a number of people around the world, so we were extremely excited to see what they had in store for us. They did not disappoint. 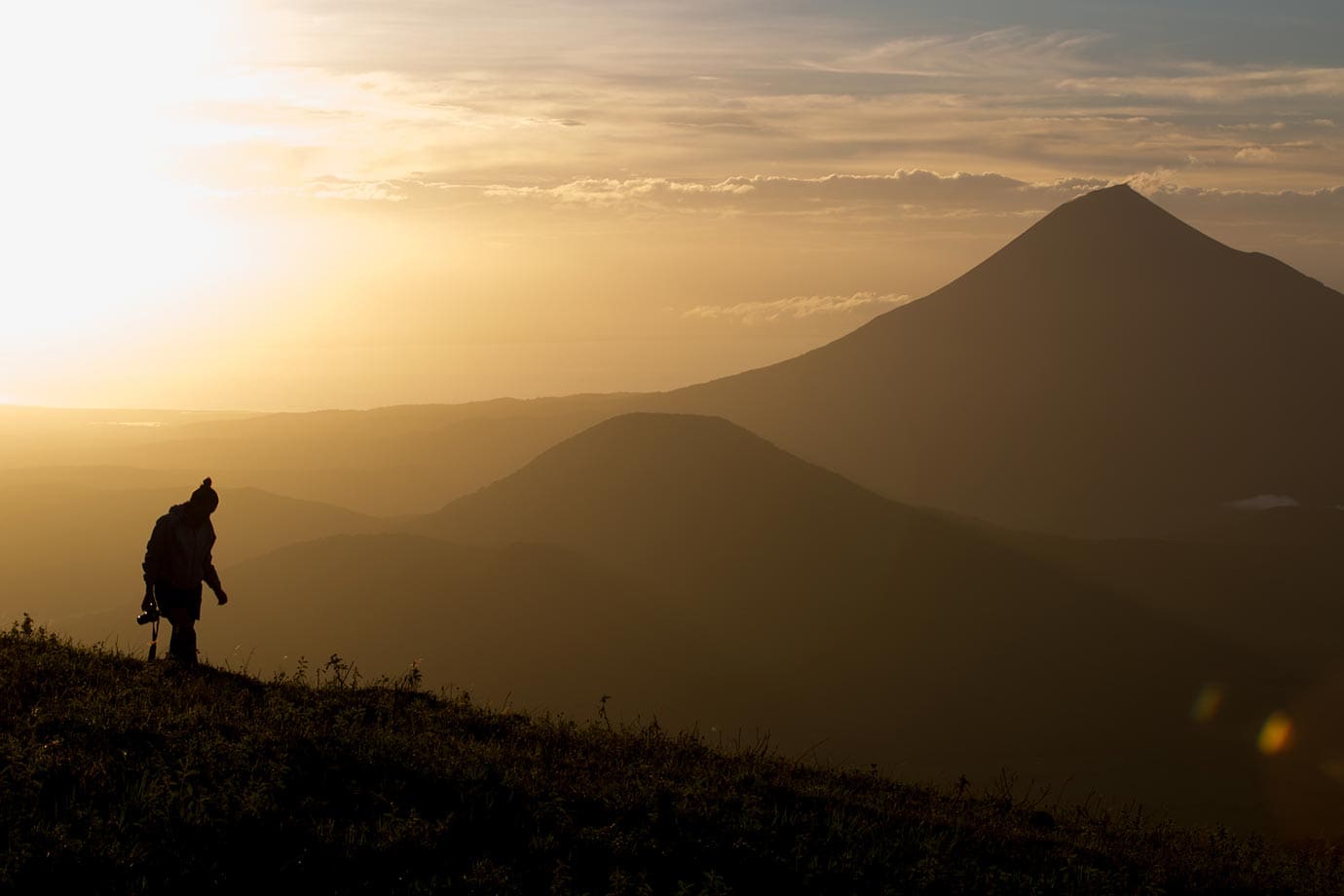 How fast do you go volcano boarding in Nicaragua?

There are few things that’ll make you feel more alive than boarding down the side of an active volcano touching speeds of up to 100kph, but that’s one of the first things we did while in Nicaragua.

Adrenaline pumping, exhilarating, thrilling, there aren’t enough superlatives to describe how much fun this really is until you give it a go, and for us it was the perfect way to start our two-day hike up a couple of volcanoes and to a crater lake.

Without repeating myself too much (you can read all about our first day and second day of what it was actually like hiking in Nicaragua), I will give it a one-word summary – breathtaking.

Honestly, backpacking in Nicaragua just made me so happy. I just couldn’t stop smiling. 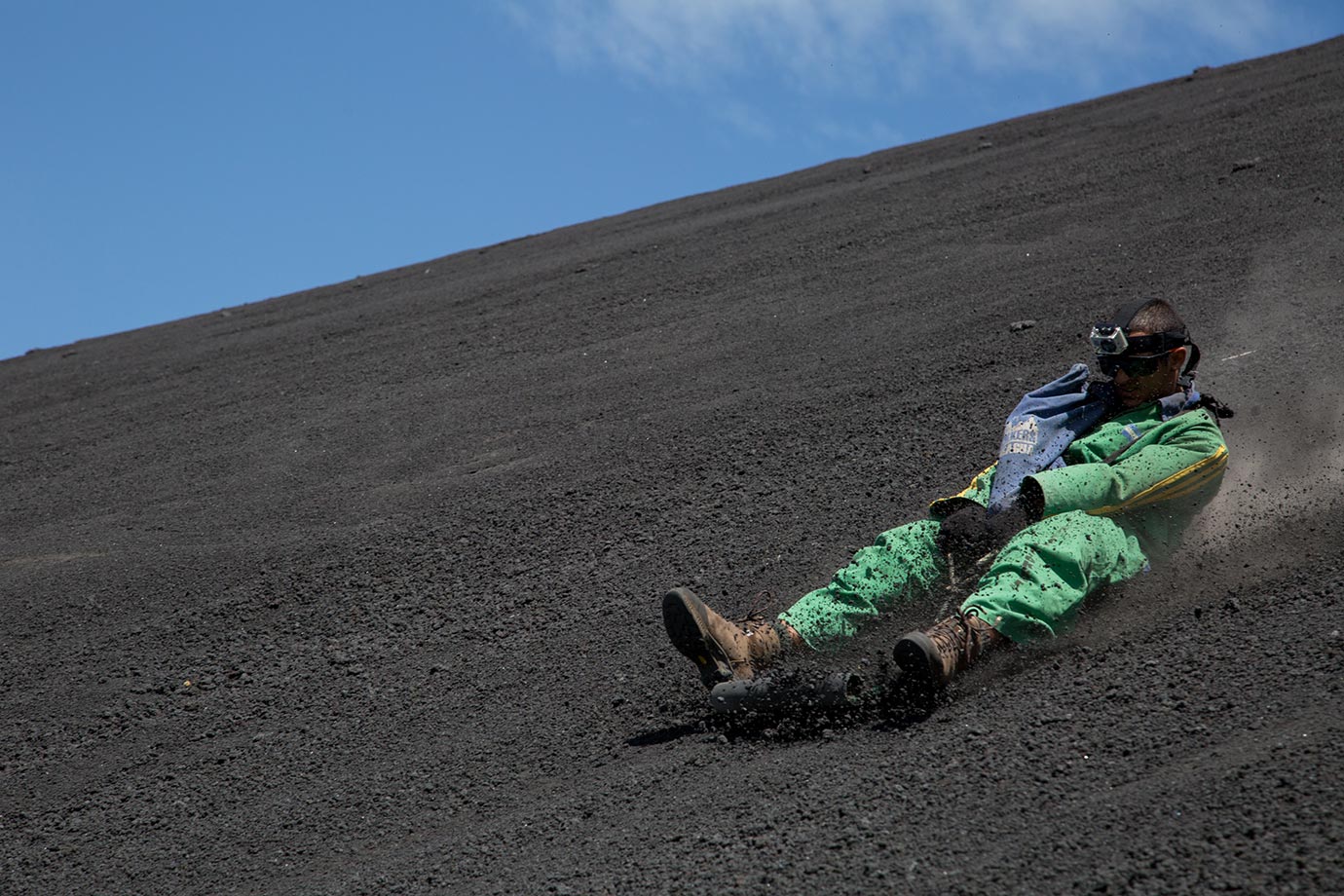 Once we had finished hiking in Leon, we bounced on over to San Juan del Sur, a place that’s become notorious for its partying.

One of Brian’s buddies from Vancouver, Karim, owns and runs a bar there called The Loose Moose (you’ll never guess what type of bar it is), so we spent a lot of time knocking back Caesars and hanging out with all the ex-pats.

I didn’t realise until I was in there, but The Loose Moose does a chili shot challenge with each shot of vodka getting spicier and spicier until it was mind-blowing. Not one to turn down a chili challenge anywhere, I just had to give it a go.

And how did I get on? Our Nicaragua episode tells all (you can watch it at the top of this post!) 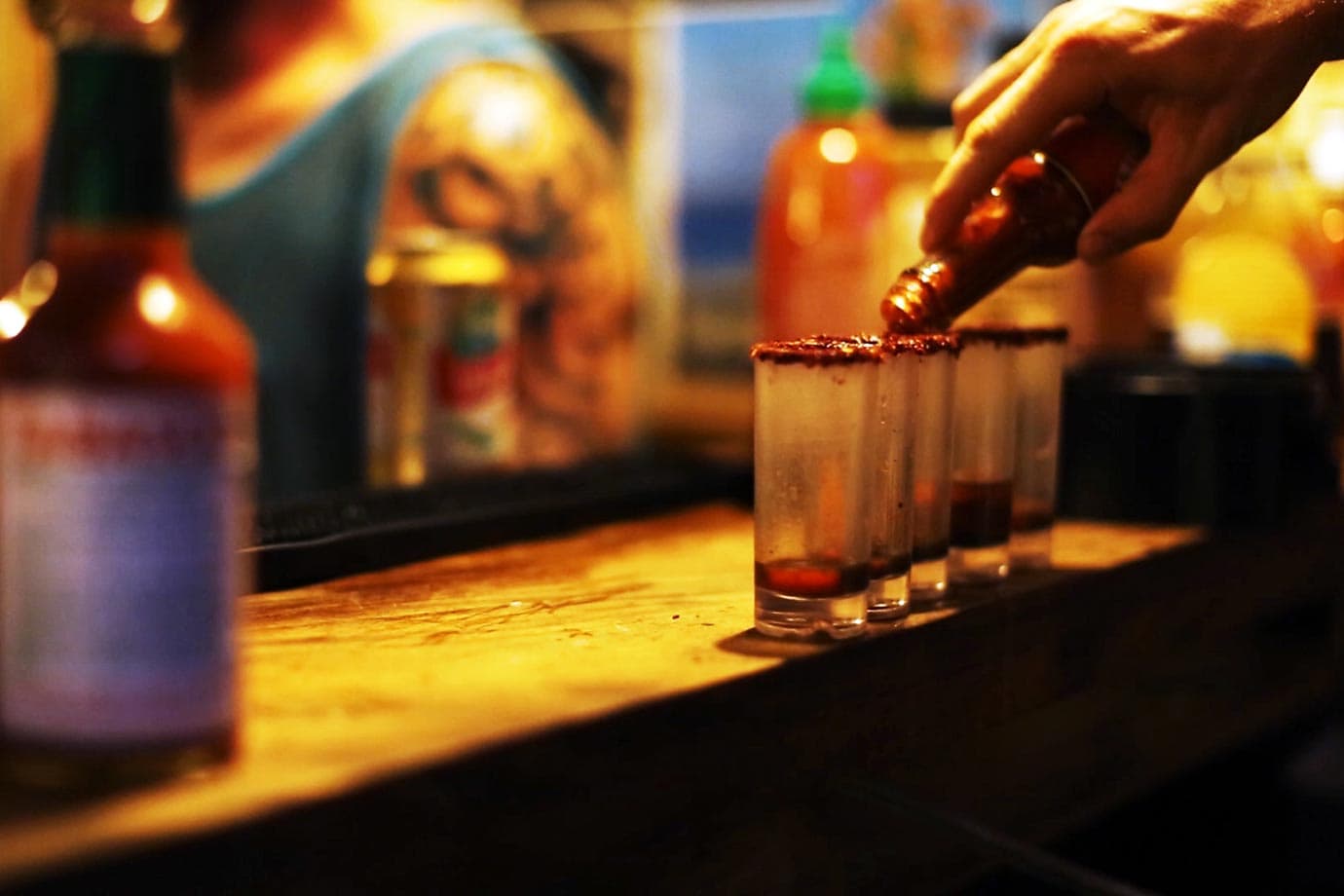 Derek was amazing – surprisingly quiet for a clown, but funny with it, though he did get a little too clingy at times. Still, he became my trusty partner while backpacking in Nicaragua. Who would’ve thought? 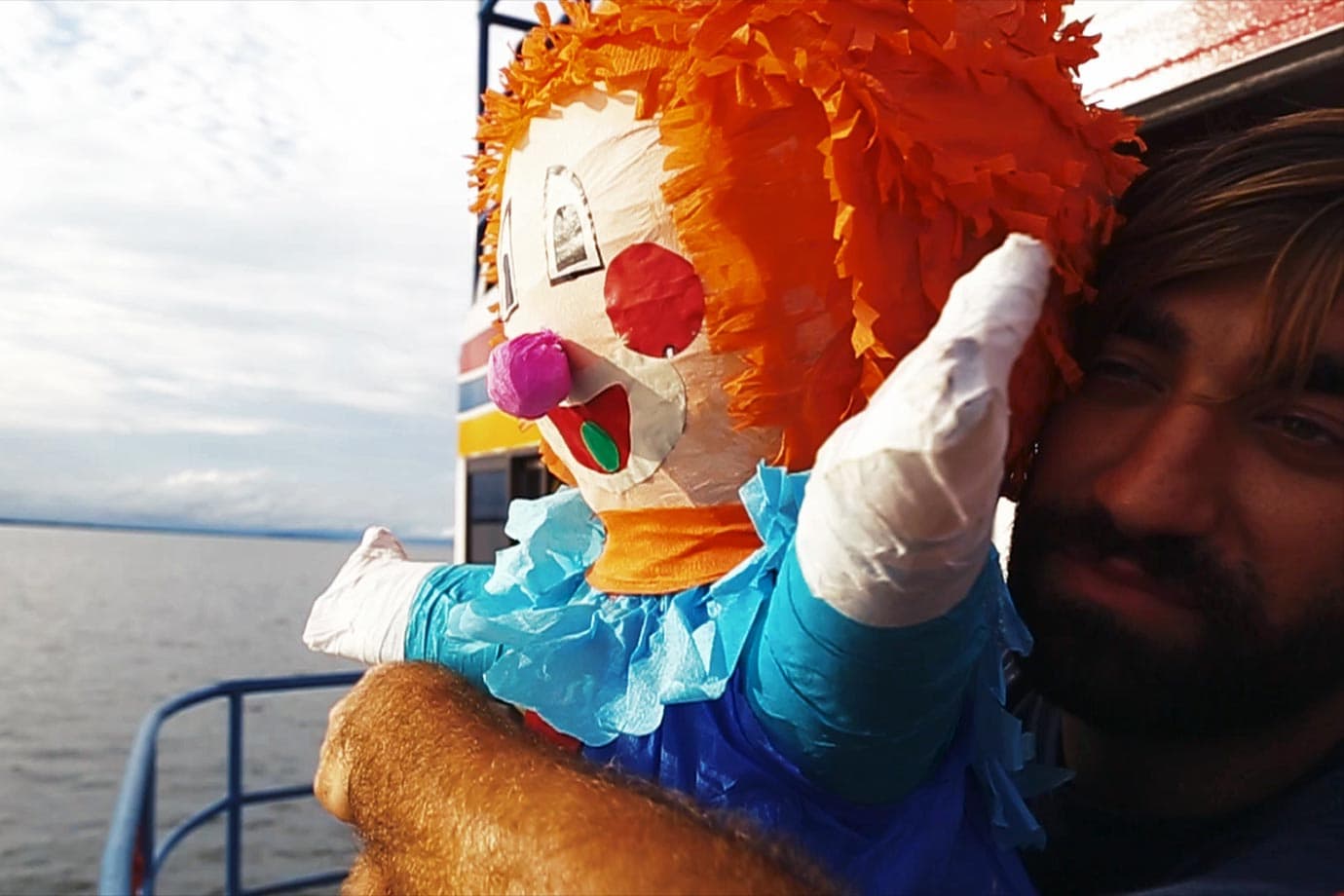 In the end, backpacking in Nicaragua truly lived up to its reputation, and it quickly became one of our favourite countries not only in Central America, but in the whole world.

And for the three of us it felt good to get back to backpacking in Nicaragua again. It felt like we really needed it.

Have you ever been backpacking in Nicaragua? If so, what are some of your favourite things to do there? Let me know in the comments below! 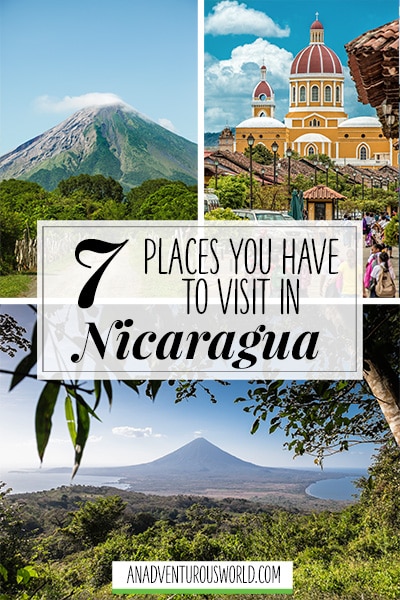 Nicaragua is such a big and amazing country... I love Leon, it has always been my base city, but completely adore Matagalpa and the Somoto Canyon, north of Managua. Juquillio beach on the northwest coast is also really cool, as well as the volcano Cosiguina. Everything is just awesome... people are so friendly!

Thank you so much for your comment! I completely agree with you, Nicaragua really is an amazing country and I really hope I get to explore more of it again in the future. So many places I haven't been to yet!