Imagine going on holiday to an unknown destination with a suitcase packed full of someone else’s clothes. Well, that’s exactly what I’ve just done with some very **interesting** results.

When I teamed up with Expedia to go on their #MysteryLuggage challenge, I always knew it was going to push the boundaries, but little did I know that I would be walking around the streets of Barcelona in women’s clothes!

I remember watching a programme, Del Boys and Dealers, all about how people make a living off going to second-hand lost luggage auctions in London hoping to find some gems inside these bags (figuratively and literally). While watching, I had the idea that it would be brilliant to go to one of these auctions myself, buy someone’s lost luggage, head straight to the airport and only use the clothes inside, all without me knowing what I had just bought, so that’s exactly what I did.

Being a company into quirky creative campaigns, Expedia loved the idea and were very keen to send me somewhere, especially if it potentially involved me strutting around in women’s clothes, which inevitably is exactly what happened. 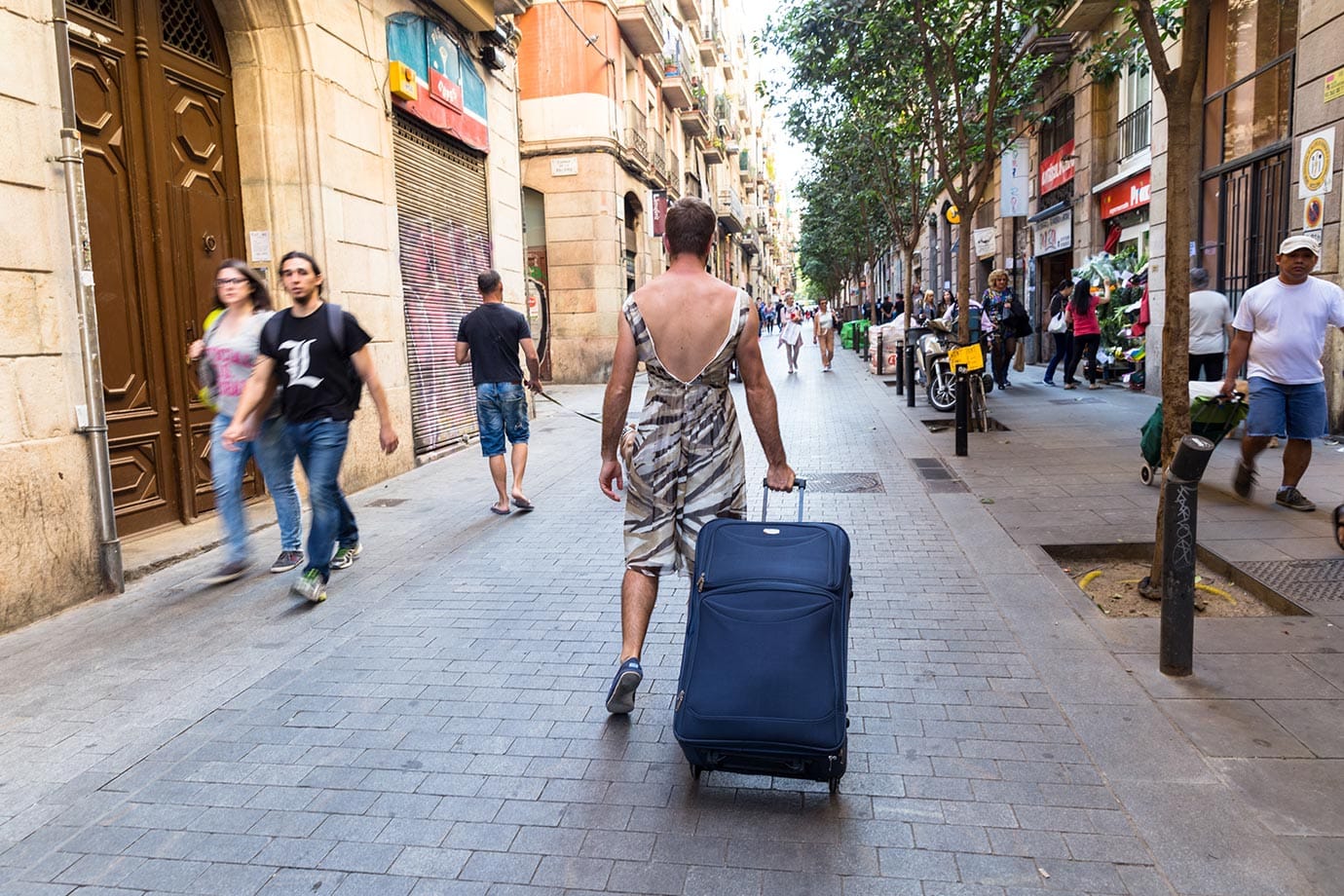 Before going on someone else’s holiday though, first of all I needed their luggage, so early one morning I headed over to Greasby’s, an auction house in South London.

To be honest with you, I had absolutely no idea what I was doing there, which was evident to all the 20-odd regulars who go every week, but I tried my best to blend in (though I stopped short of wearing a flatcap).

In a small warehouse packed from wall to wall are all the suitcases and bags waiting for a new owner. The one thing about Greasby’s is you’re not allowed to look inside any of the lost luggage, everything is a blind bid, so you really do have absolutely no idea what’s inside (which I have to admit appealed to me quite a lot!).

I had my eye on this one navy blue case that looked nondescript enough to sneak in under the radar, but once it came round to bidding for it the whole thing whistled by in the blink of an eye. The opening bid of £14 went up, I countered with a quick £16, the auctioneer retorted again with £18, I firmly kept my bidding card up for £20, and then BANG! Down came the gavel. It was all over in about 37 seconds. 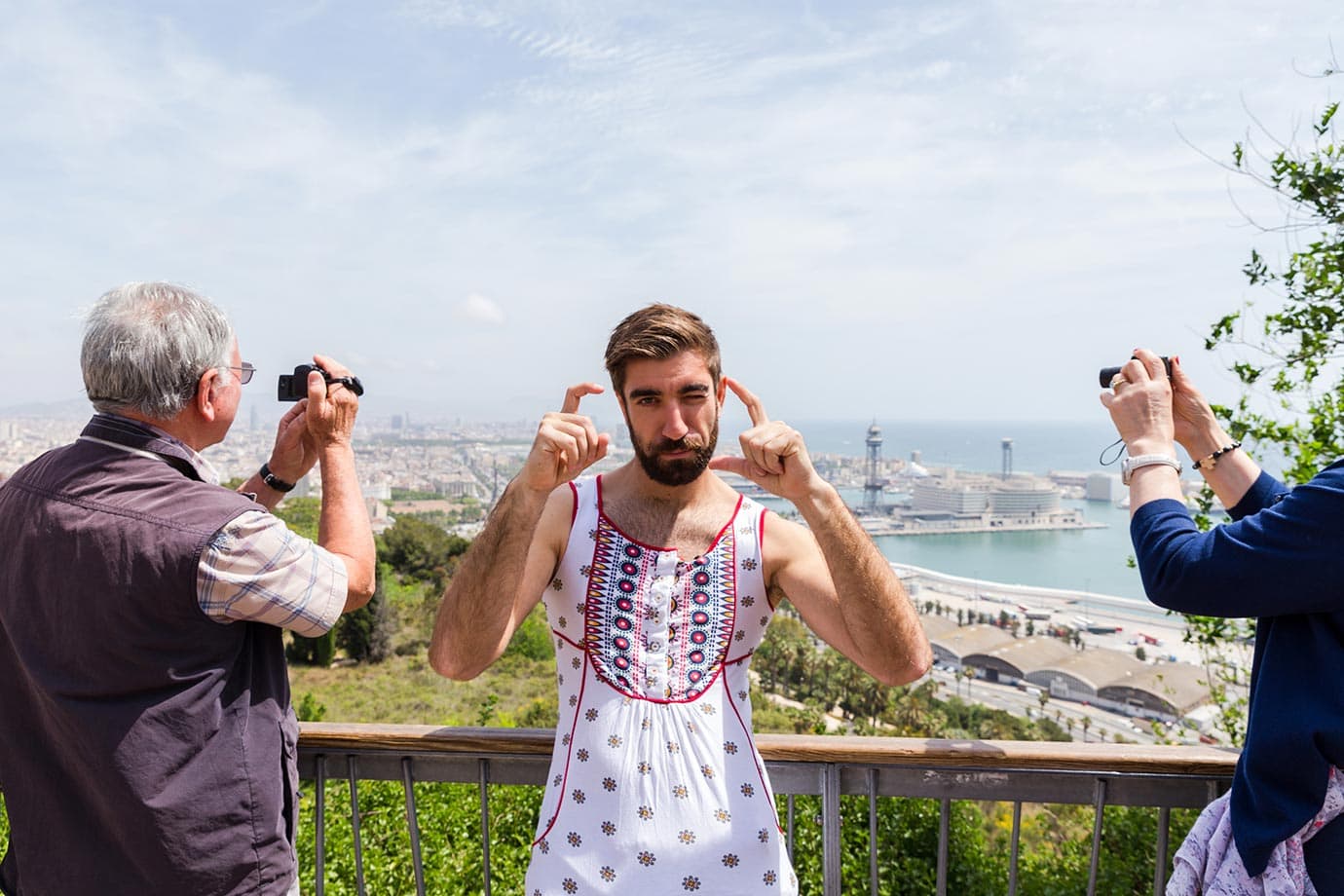 I found it stunning that I could buy a suitcase full of clothes for only £20. Seriously, everyone should be doing this!

Of course, I hadn’t looked inside the suitcase yet, which could be a contributing factor why it was so cheap, but still, bargain, right!?

Immediately from Greasby’s I headed to Heathrow Airport to book a flight. At this point I still had absolutely no idea where I was flying to, but after jumping on Expedia and having a little look around at the airport I decided I wanted a beautiful beach and some sunshine, so I booked a flight and hotel to Barcelona! Also, despite booking last minute, I managed to save £60 by booking a flight and hotel combination, so I was pretty happy with that! 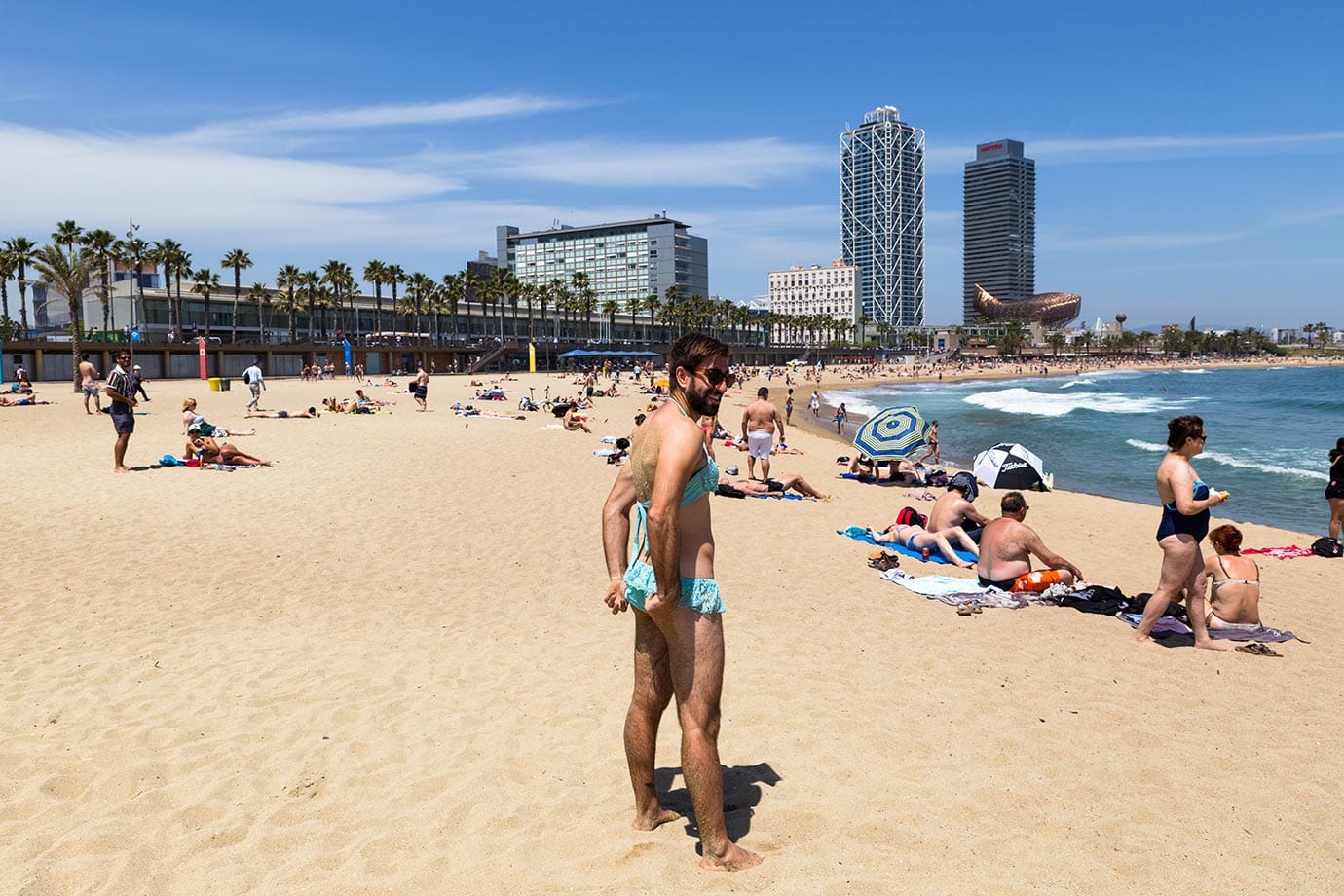 Once I got to Barcelona, I have to admit I started to get more than a little nervous about the contents of my #MysteryLuggage. I had a feeling that it was either going to be a) kids’ clothes, or b) women’s clothes.

As soon as I checked into my hotel room, the first thing I did was open up my suitcase, all with the cameras rolling of course! And lo and behold, what was inside? Women’s clothes.

Lots and lots of floral print, a lovely little sheer lacy number, a fair few skirts and even a corset (which I had no idea what to do with). Zero men’s clothes. Just great. 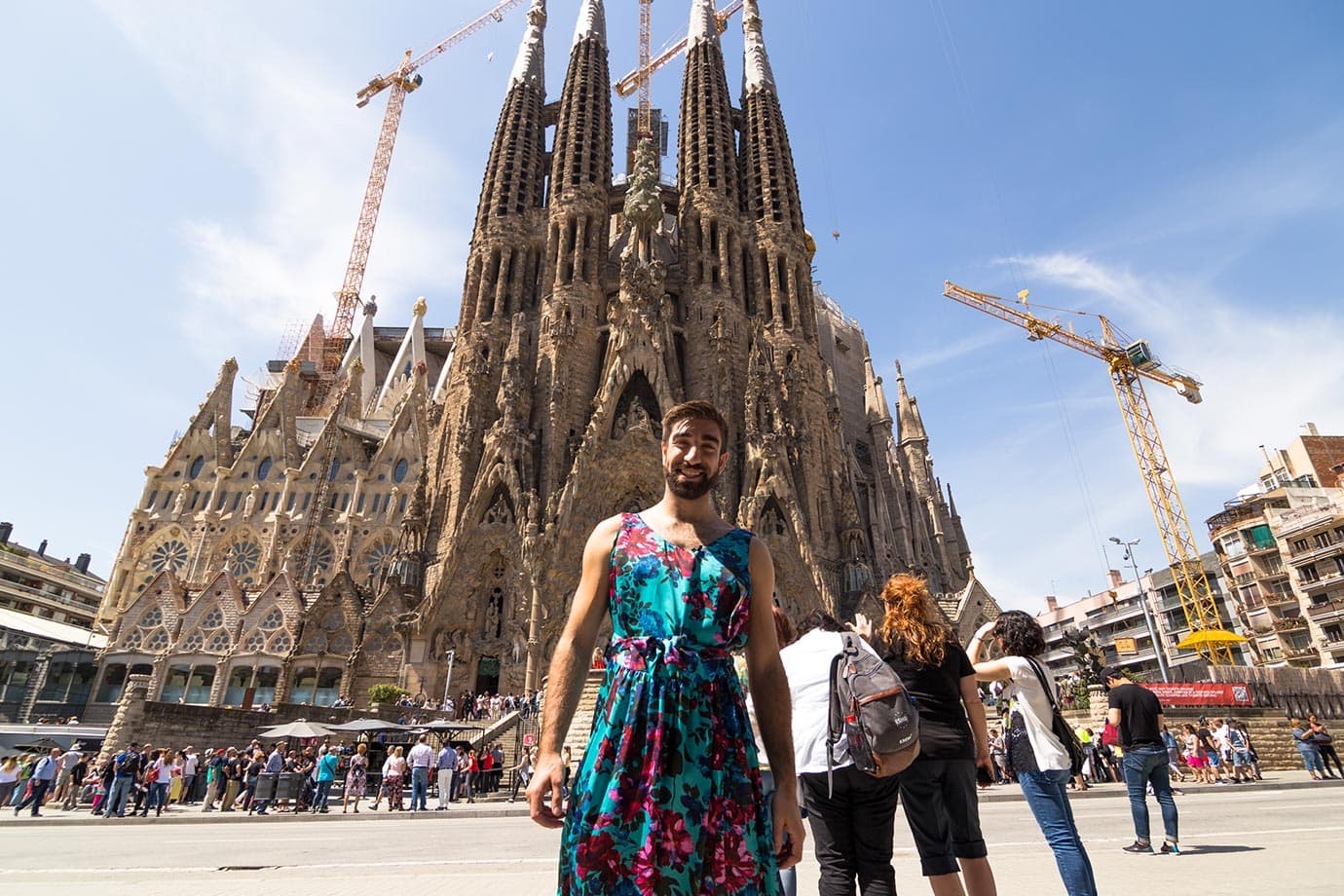 I’m not going to lie, the first time that I had to put on that blue and pink floral dress and walk around outside the Sagrada Familia, Gaudi’s Cathedral, I couldn’t have been more embarrassed. Everyone looked at me, obviously, but it was just so embarrassing, it really was.

However, after walking around at Parc Guell, another one of Gaudi’s creations, and Las Ramblas, one of the busiest and most popular points in the city, I stated to feel much happier about everything. Who knew women’s clothes could be comfortable! 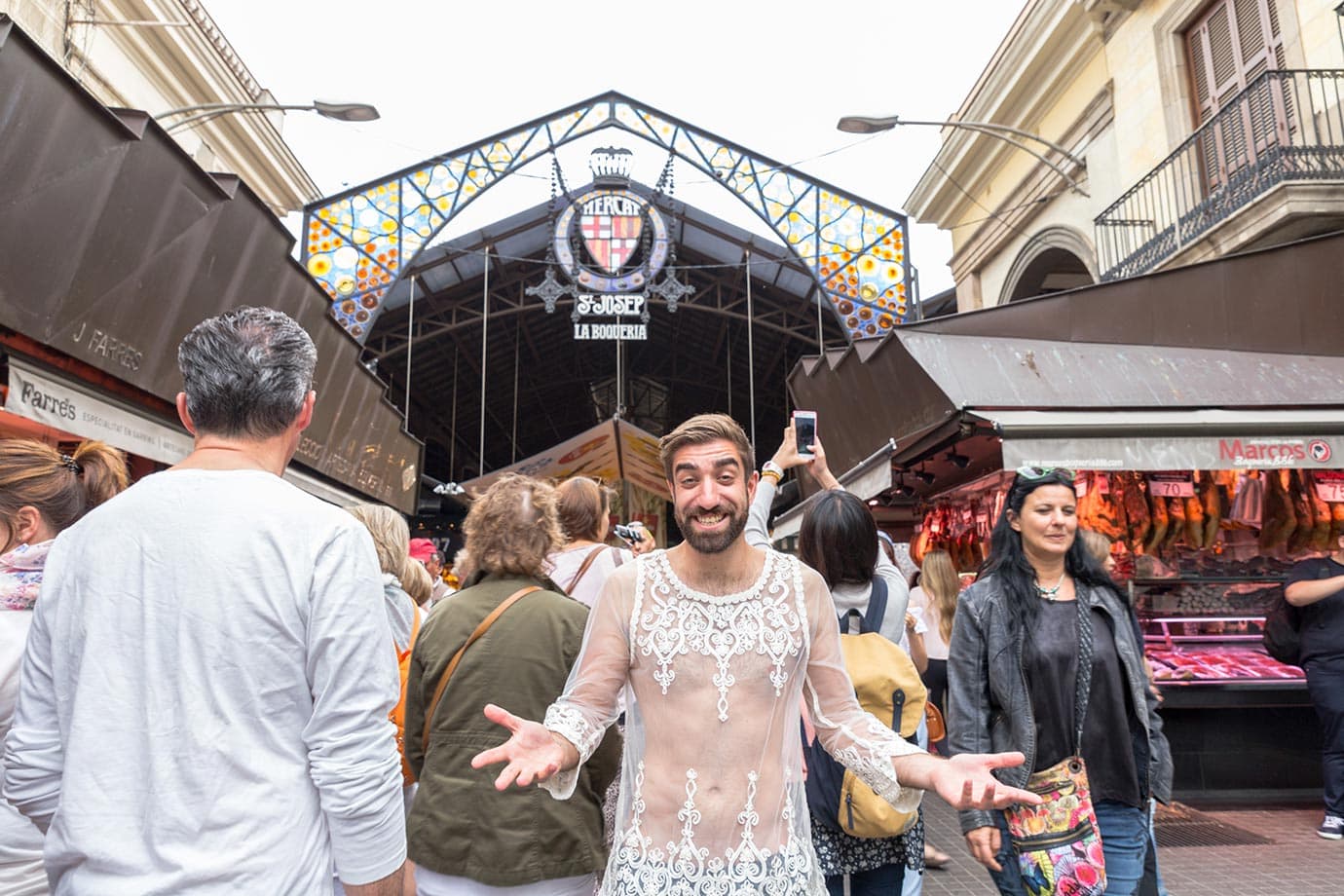 I think my favourite moment was standing outside La Boqueria, one of the main markets in Barcelona, in see-through sheer lacy number. Every person that walked past did this double take like “what on earth is that guy wearing!?!?!?” One person even should over “guapa”, beautiful lady in Spanish. I’m not going to lie, I was pretty happy with that comment.

While in Barcelona I really tried to go everywhere that I think my #MysteryLuggage owner would have gone to, all the major tourist spots like Barcelonta Beach and Montjuic, and I think whoever it was (I think we can safely assume it was owned by a female) would’ve really enjoyed their holiday!

All I can say is that going on someone else’s holiday is an amazing experience, and I can’t wait to see where it takes me to next!

What did you think of my #MysteryLuggage challenge? Do you think you would’ve walked around Barcelona in women’s clothes? And if not and you’d like to see me do it again, which city would you like me to do it in next!?

This is bloody brilliant! You rocked it well though, Macca!

Ha ha ha. Thanks guys, I really really appreciate it! Took some serious stones to put on that first dress but I think I just about pulled it off!