Seeing Honduras through the eyes of the Broad

As I walked through the humid rainforest in Honduras, ankle deep in fresh clay-like mud, I heard myself say, “You’ve just got to go one step at a time and hope for the best.” I was saying it to someone I was hiking with, but mostly to myself. It’s these little reminders that keep me smiling even when soaked to the bone and caked in dirt. 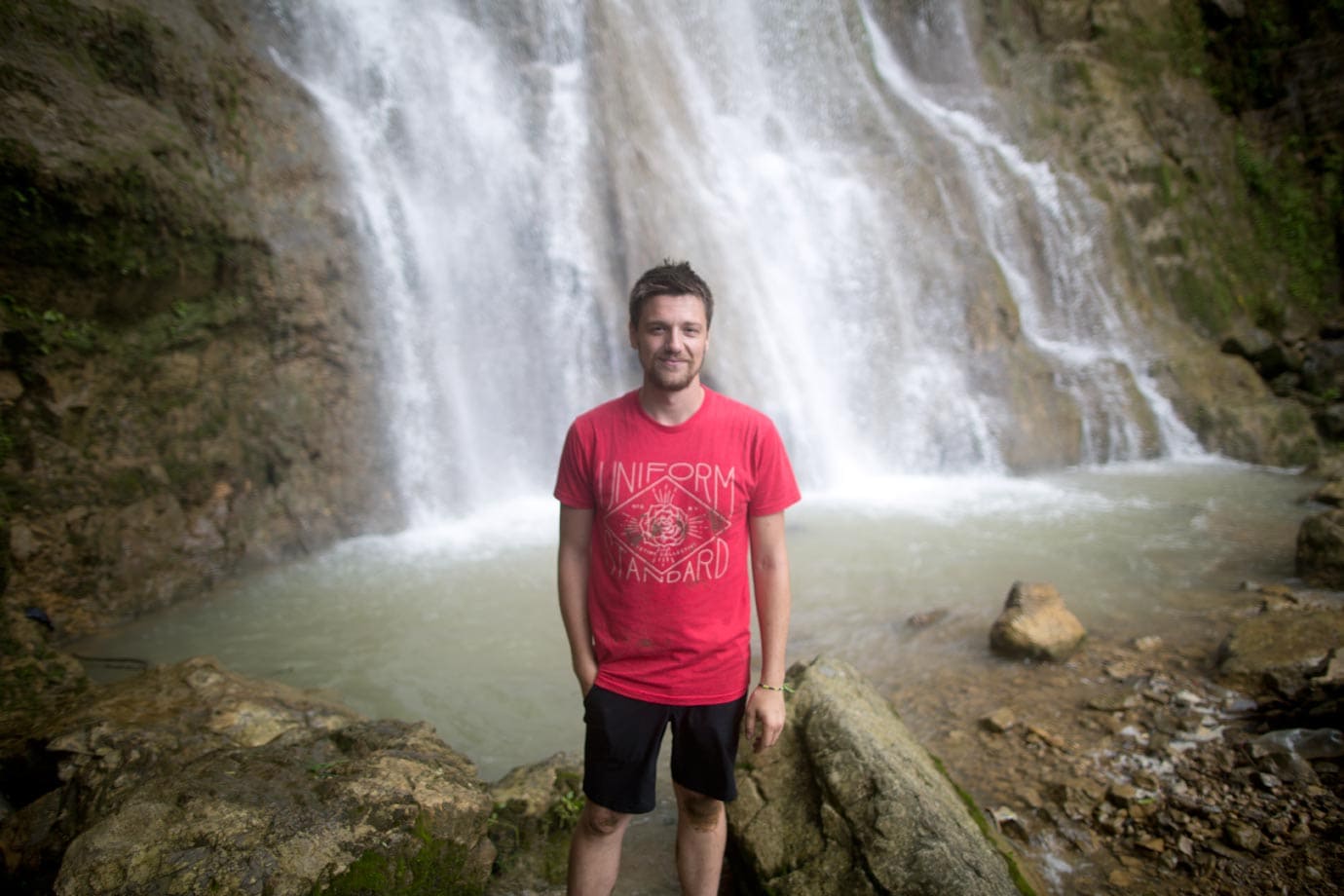 As Macca mentioned in his post about hiking in Honduras, we found ourselves in a complete, all encompassing downpour by about 2pm the day we hiked the Three Waterfalls. Since this wasn’t the first instance of rain over the past month, the “trails” were mostly just oceans of thick, deep mud that we tried to navigate with one goal in mind: don’t loose a shoe in the mud.

There is no photo evidence because the cameras were quickly packed away for safety but you can take my word for it. I would imagine this would be an entirely different experience in the dry season. For instance, there would be terrain to walk over that doesn’t sink beneath your feet.

But what can you really expect when visiting Honduras in the rainy season? Our morning started out sunny enough, but as I have learned while travelling through Central America (sometimes the hard way), the rain comes later. Hiking up a gravel road with our LL Cool J-like guide, Walter, the views were spectacular. We were overlooking a town in the valley below called Las Vegas.

Name apart, nothing could be further from the commercialized chaos of Las Vegas, Nevada. Shades of green stretched as far as the eye could see and structures were sparse.

While in Honduras we stayed at a tiny microbrewery and hostel deep in the jungle called D&D Brewery. It popped up when we were looking for somewhere to stay in the area and basically, had us sold at “microbrewery”. 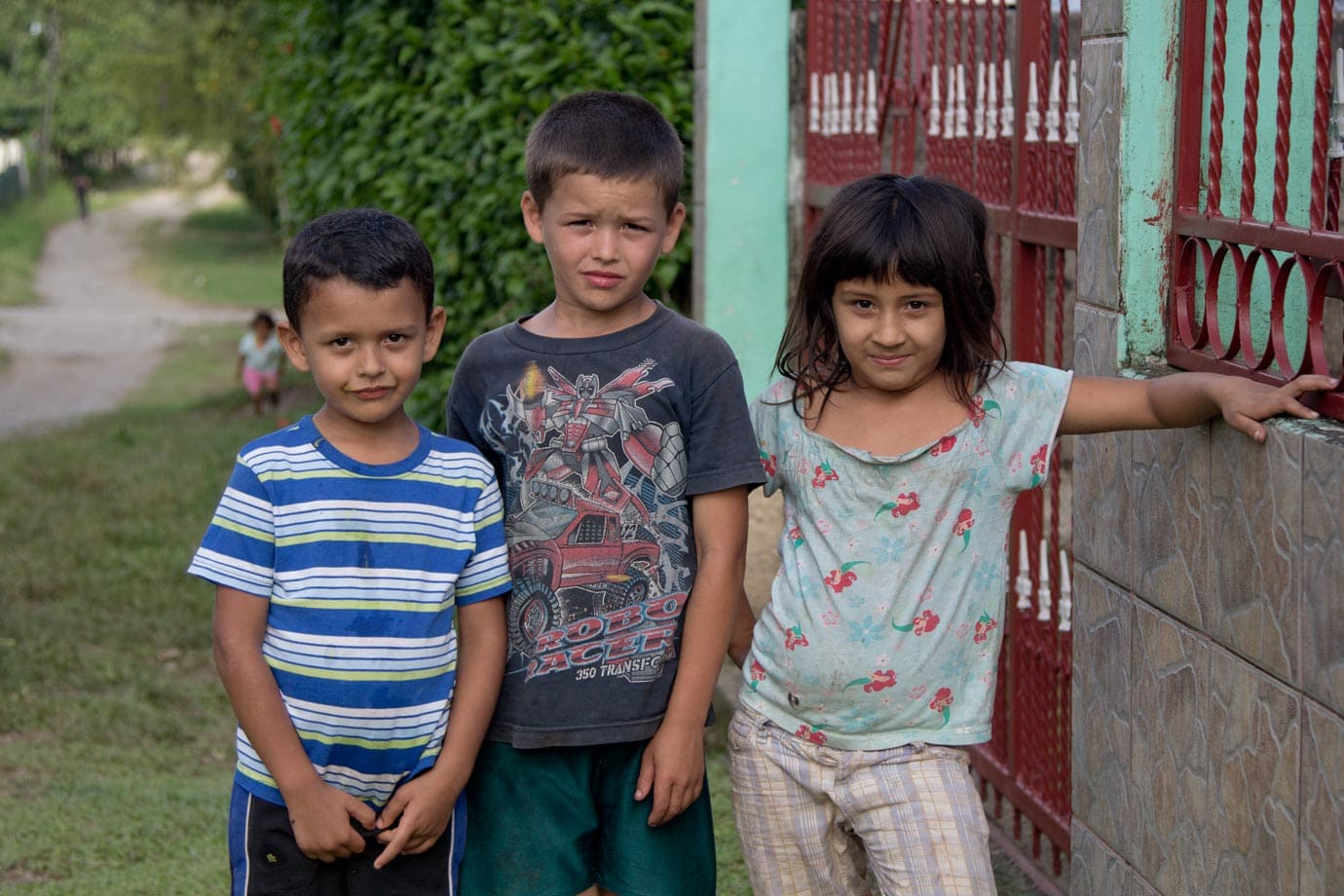 Arriving there at night, we got off our bus at the right place with the help of the bus driver and maneuvered our way down a dark country road, wondering where we were going.

We got turned around by a helpful woman who happened to poke her head out the window of her home. She pointed us in the right direction and my guess is she’s done the same thing for many travellers before us. 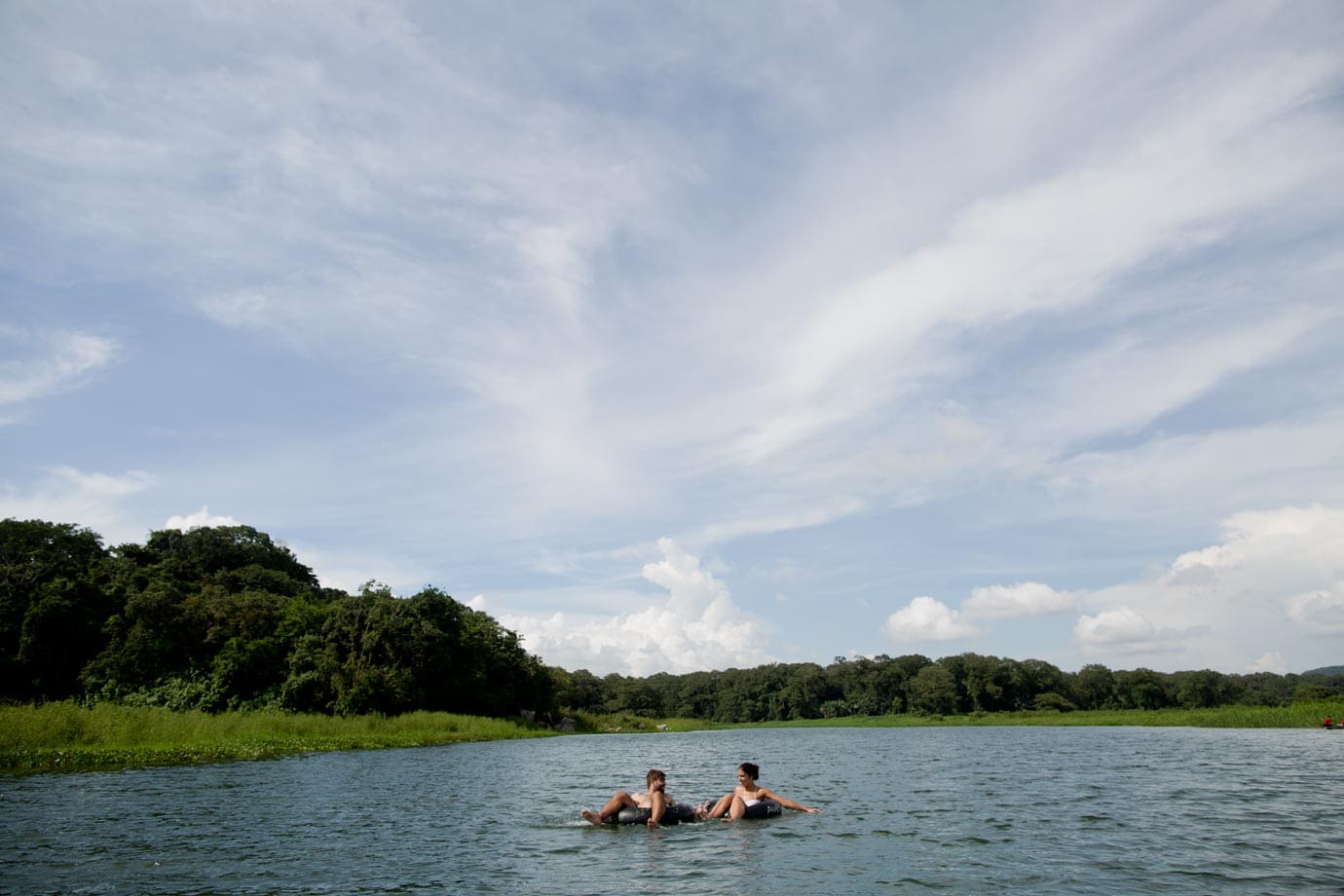 This woman was just one of the many hospitable people we met while staying in Honduras. Walter, who worked for D&D Brewery took us out on the Lago de Yojoa, with the help of a friend and said friend’s row boat.

The lake was the main reason why we choose to stay in Peña Blanca and at the brewery. We didn’t have very much time to spend in Honduras and so we choose the lake since it seemed like a spot not to be missed.

It was on this leg of the trip where I saw the biggest spider of my life, our clothes got so soaked that they never fully dried again, and I met some of the most interesting characters on the road. We may have only stayed a short while in Honduras but it felt like just the right amount of time to get lost in the woods.

Seeing Honduras through the eyes of the Brit

Chicken buses really do optimise the whole region of Central America, and again that’s no different with Honduras. Every time the three of us cross into a new country we seem to do it on chicken buses, and I can’t help but have this childish excitement whilst being on them (by the looks of things, both Brian and Brianna love them too!)

Perhaps they signify new ventures and new possibilities to me, or perhaps it has something to do with the pure simplicity of travel. They present the perfect opportunity to be totally disconnected from the world and to be totally caught up in the moment; there aren’t many other modes of transport that can offer such a basic luxury.

The way I see it, you can’t fail but have a good time bouncing around at the back of a chicken bus – often three feet off of your seat due to the complete lack of suspension – all while having your senses mugged with reggaeton blaring out of a 1970s sound system. It’s one of those things; you either love it, or hate it, and the three of us have firmly embraced travelling on chicken buses. 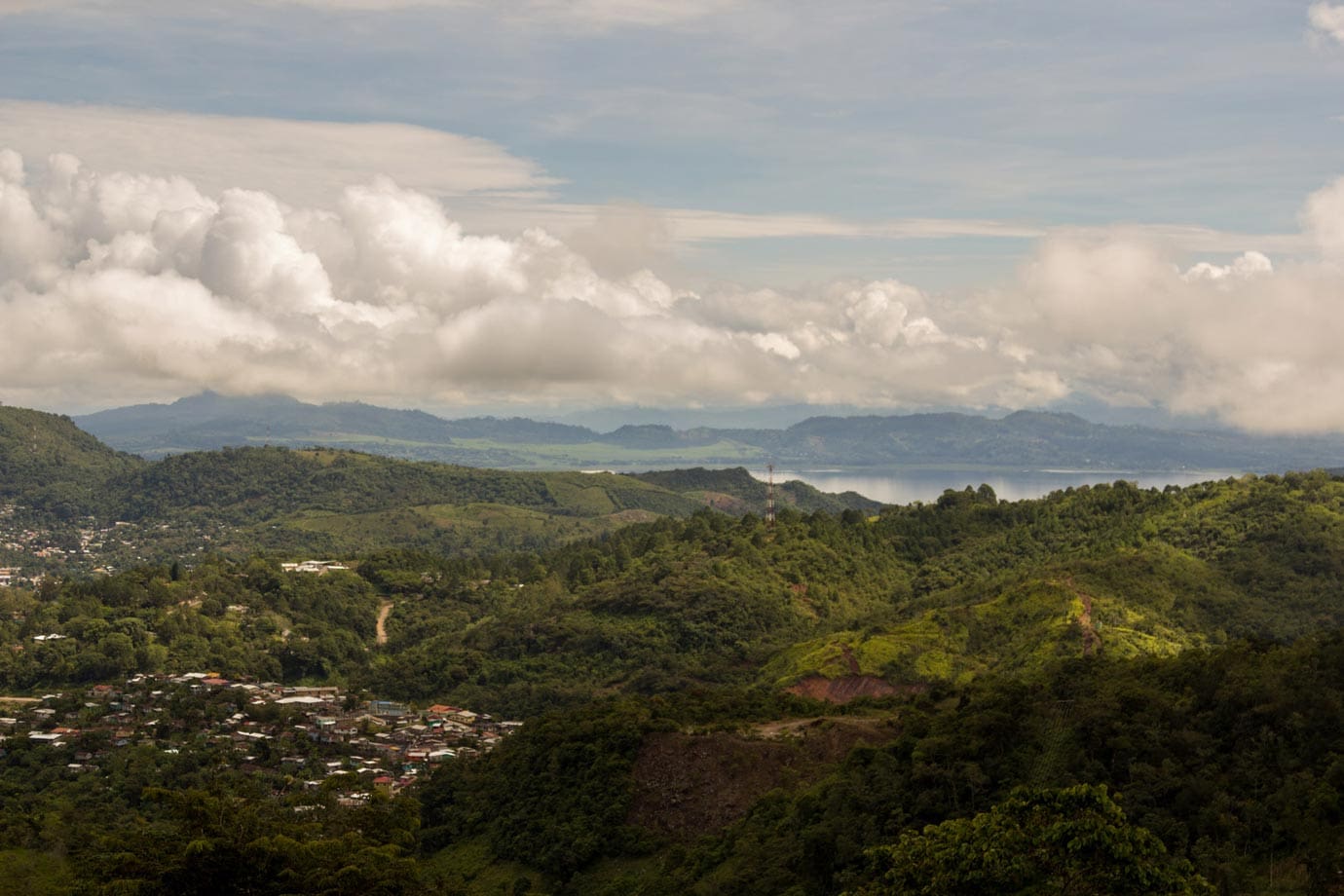 Anyway, I digress. Let’s get back in the moment.

Our first stop in Honduras was right in the very heart of the rainforest and the mountains, a little place called Lago de Yojoa in Peña Blanca.

Lago de Yojoa is the largest lake in the country, and with high volcanic mountains surrounding the water’s edge it is about as beautiful a setting as you’re every likely to see.

Honestly, it’s one of those places that looks good from every angle. It doesn’t matter if you’re lying on your back in the middle of the lake looking up at the mountains, or hiking to the top of one seeing this little sapphire in a sea of green, the place just takes your breath away. 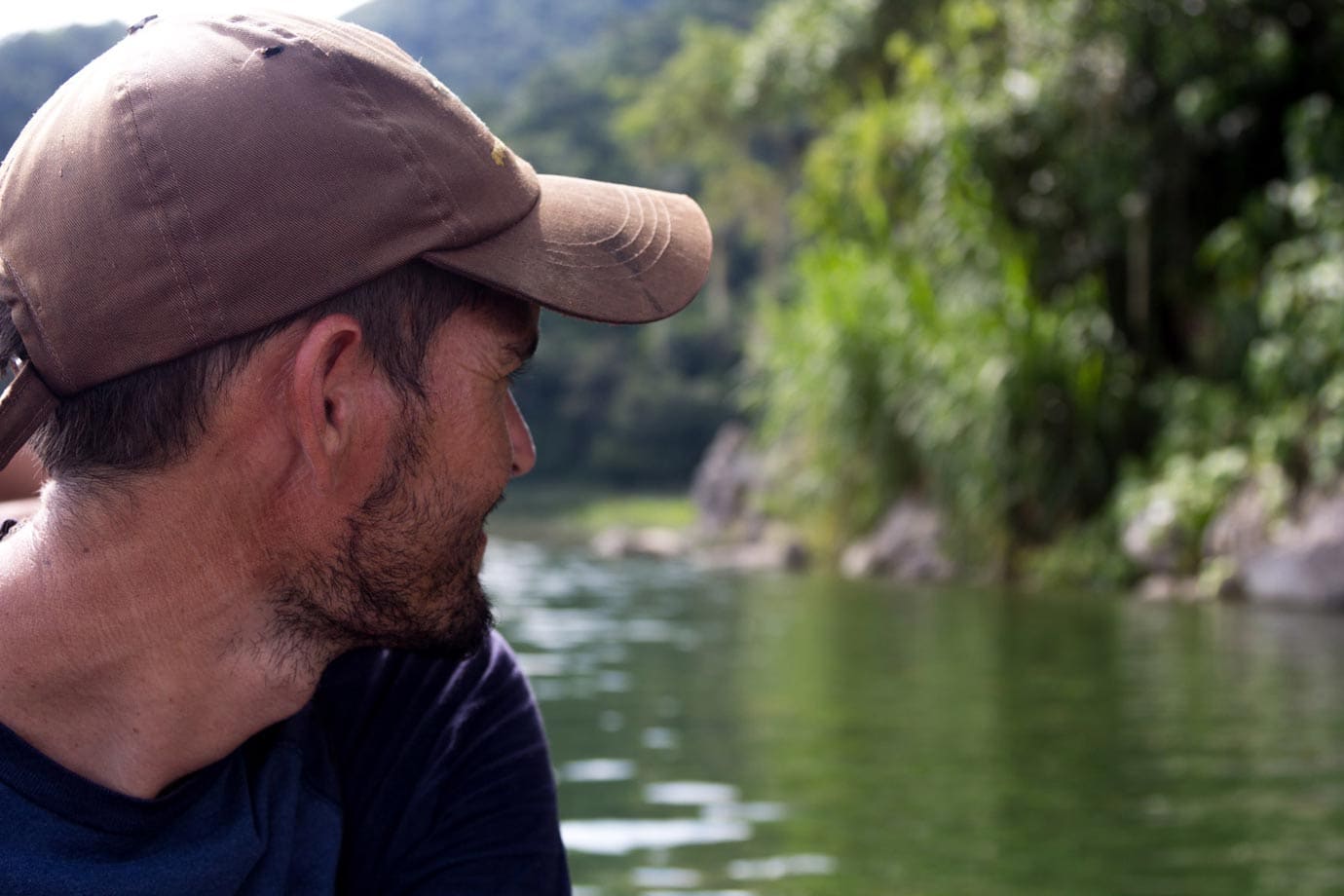 While at Lago de Yojoa, we undertook an amazing hike to the Three Waterfalls (that was until we got caught by the rain; then I started to worry), and we spent a day on the lake itself.

With Walter, one of the guys working at the hostel, and his friend as guides, we took to the water and rowed down one of the estuaries right into the centre of the lake. I know it sounds clichéd, but it was one of the most peaceful and relaxing days we’ve had on the road. On in this case on the water. When you’re in such a stunning setting, sometimes you don’t need to fill it with words, but you can just appreciate where you are and who you’re with. While on Lago de Yojoa we did exactly that.

As we were rowing back, we came across a load of kids fearlessly jumping off a 10-metre high bridge into the water while others watched while lazily floating in inner-tubes. Seeing their childish excitement was infectious, and obviously I had no choice; I had do give it a go myself. 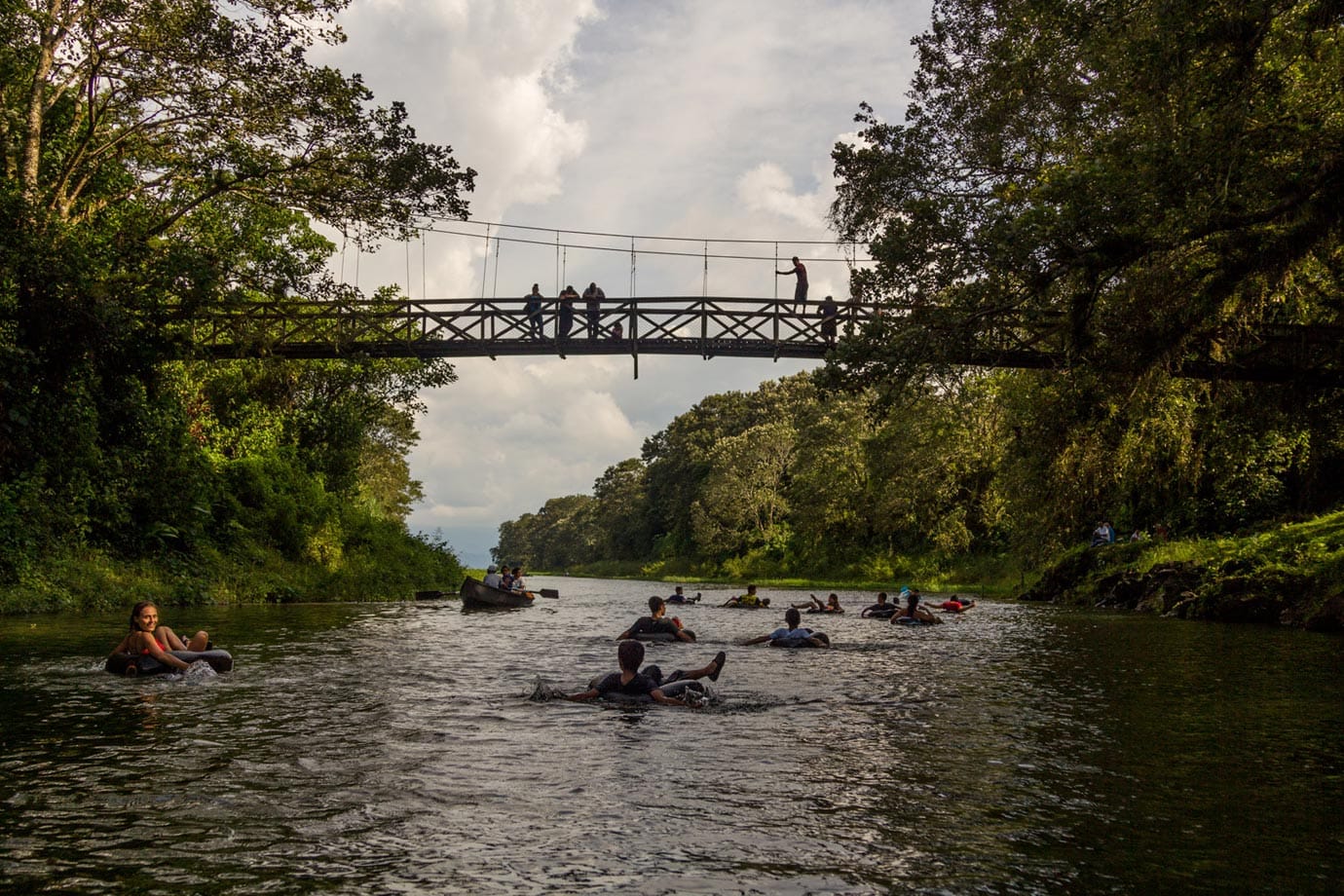 From Lago de Yojoa we wanted to cross from one side of Central America to the other, from Honduras all the way to the Pacific Coast of El Salvador, another country we were dying to experience for ourselves.

Getting back on a chicken bus once again, we felt we could be in for an extremely long ride. Inevitably, we were…

Great pics, great view, everything's great. Wish I can travel to Honduras one of these days. At least now I know where I will head next. Thanks!

Thanks Marie; we're loving your comments at the moment!

There are so many great things to see and do in ALL of the countries in Central America. Watch all our videos are we'll show you!