One for the foodies: An insight into food in Bolivia

The food of Bolivia has taken some getting used to. What’s available is quite broad, and like pretty much any place in the world there are some Western influences creeping in, especially when you get into the bigger cities. For the most part, however, things have been the same way for a long time. The main staples of the Bolivian diet are corn, potatoes and meat, and they have hundreds of variations on just these items.

For breakfast, most Bolivians grab a saltena from the multiple street vendors on their way to where they’re going. They are like a Bolivian pizza pocket and are usually filled with potato, chicken, pork or egg. You can find them everywhere and they are a delicious snack. Sweet empanadas, or empanadas blancas, are filled with sweet squash and topped with frosting.

The most important meal of the day is lunch, or almeruzo. This is their main meal for the day and will often consist of four courses; salad, soup, main and dessert. What is in each can vary but Bolivians mean business when they eat lunch. I haven’t been able to eat a full almuerzo yet – there is so much food! 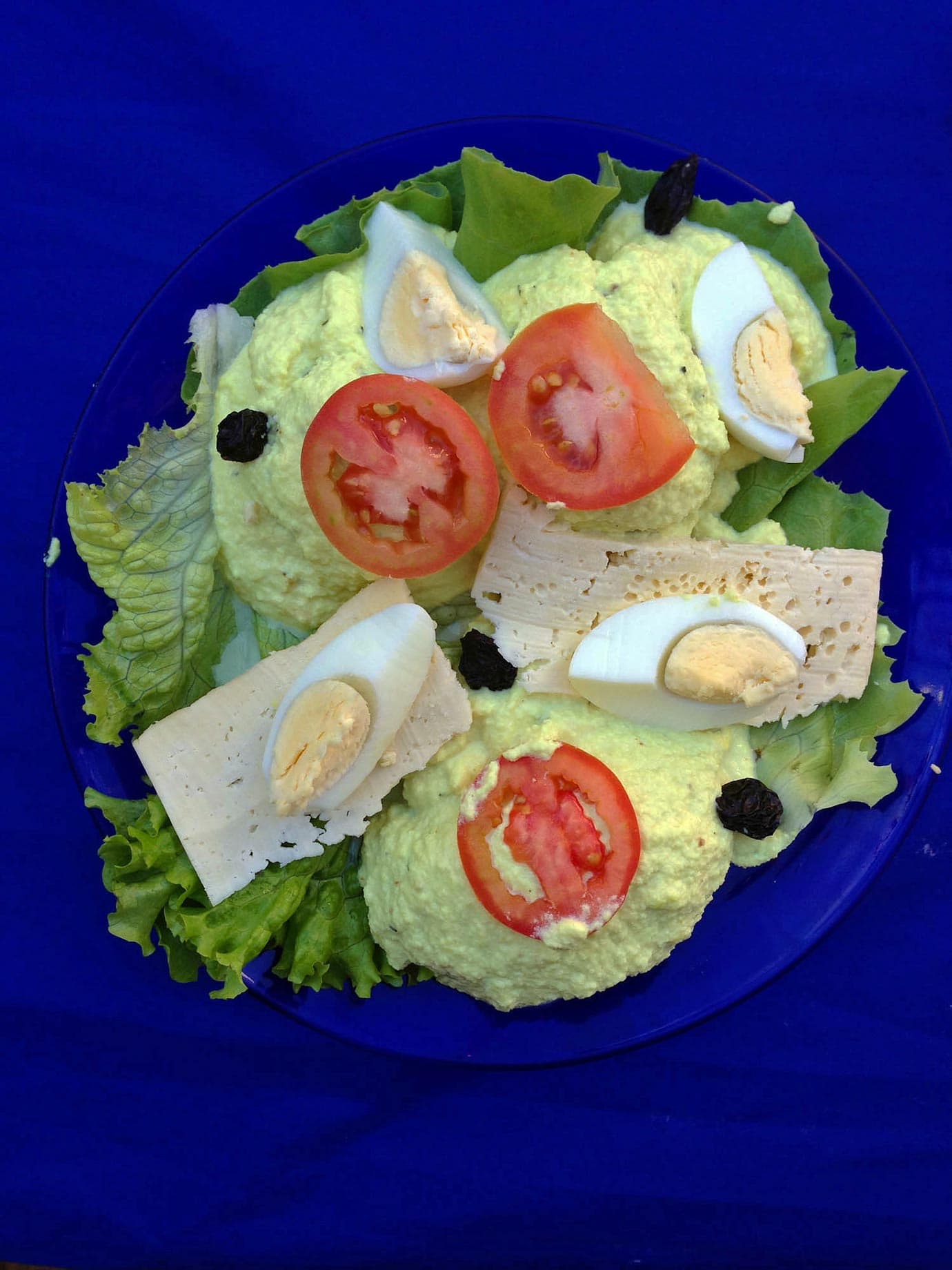 I have been getting to enjoy weekend feasts with the family I’m staying with. I tried Papas y huancaina, which is a traditional Peruvian dish. However, the Bolivians serve it with a peanut sauce dolloped over the potatoes and other veggies. Ours was served with cheese and was a fresh and delicious salad treat.

Another favourite is yuca, which they prepare deep fried with a little salt as a side dish. The oddest thing I’ve tried was probably the cangrejos: tiny crabs, which are a dish of the small town of Tomatitas just outside of Tarija. I didn’t think before biting into the little crunchy thing, which you eat shell and all. They were salty and delicious; best enjoyed with a squeeze of lemon and boiled corn on the side. 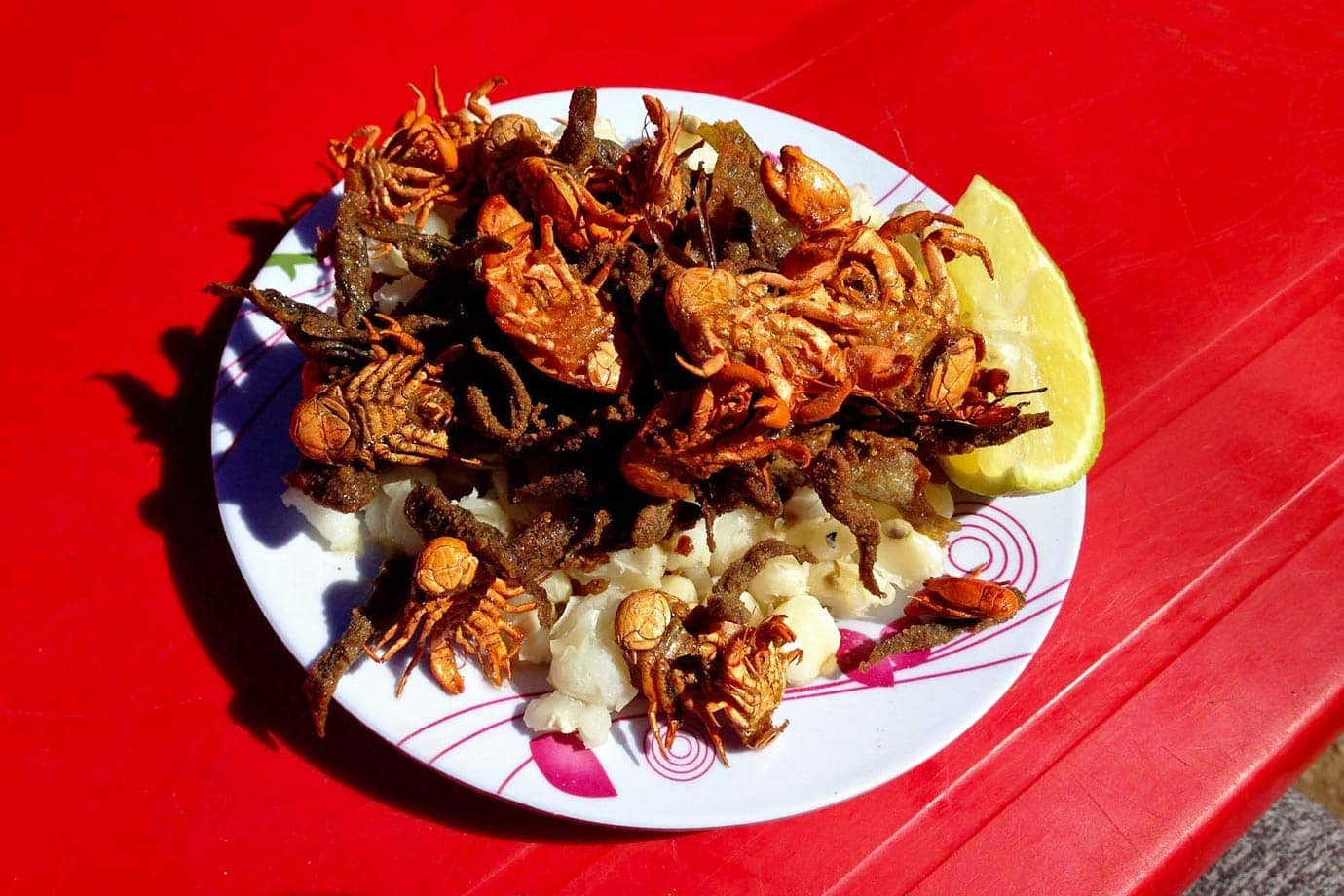 The oversized corn kernels are often dried and then boiled and served as a side dish with potatoes. Bolivia has more than 250 varieties of potatoes, some of which I have naturally never seen or tasted. They also make a warm corn based drink called api that can be served with white or purple corn (api blanco or api morado). It tastes like something between a warm smoothie and baby food. Slightly sweet, it is usually enjoyed later in the day. Another corn based snack that I’ve come to enjoy is the huminta, which is a kind of corn dough with cheese that is wrapped and cooked inside of a corn husk.

I was a vegetarian for over twelve years, and while I now eat meat, there are still some things that I’m less drawn to. The Bolivians don’t eat meat like I do. They keep the bone in and they get their hands dirty. Fish is no exception. I was surprised to find so much pescado (fish) to eat, since Bolivia is the only land locked country in South America. But they have Lake Titicaca, where they get the majority of their fish, as well as the Chilean coastline not too far from their Western border.

After their large lunch, things shut down as everyone has a siesta (nap), which usually lasts two to three hours. Shops and vendors get back to work around three in the afternoon and sometime later in the evening, they will often have only bread and tea with sugar for dinner. 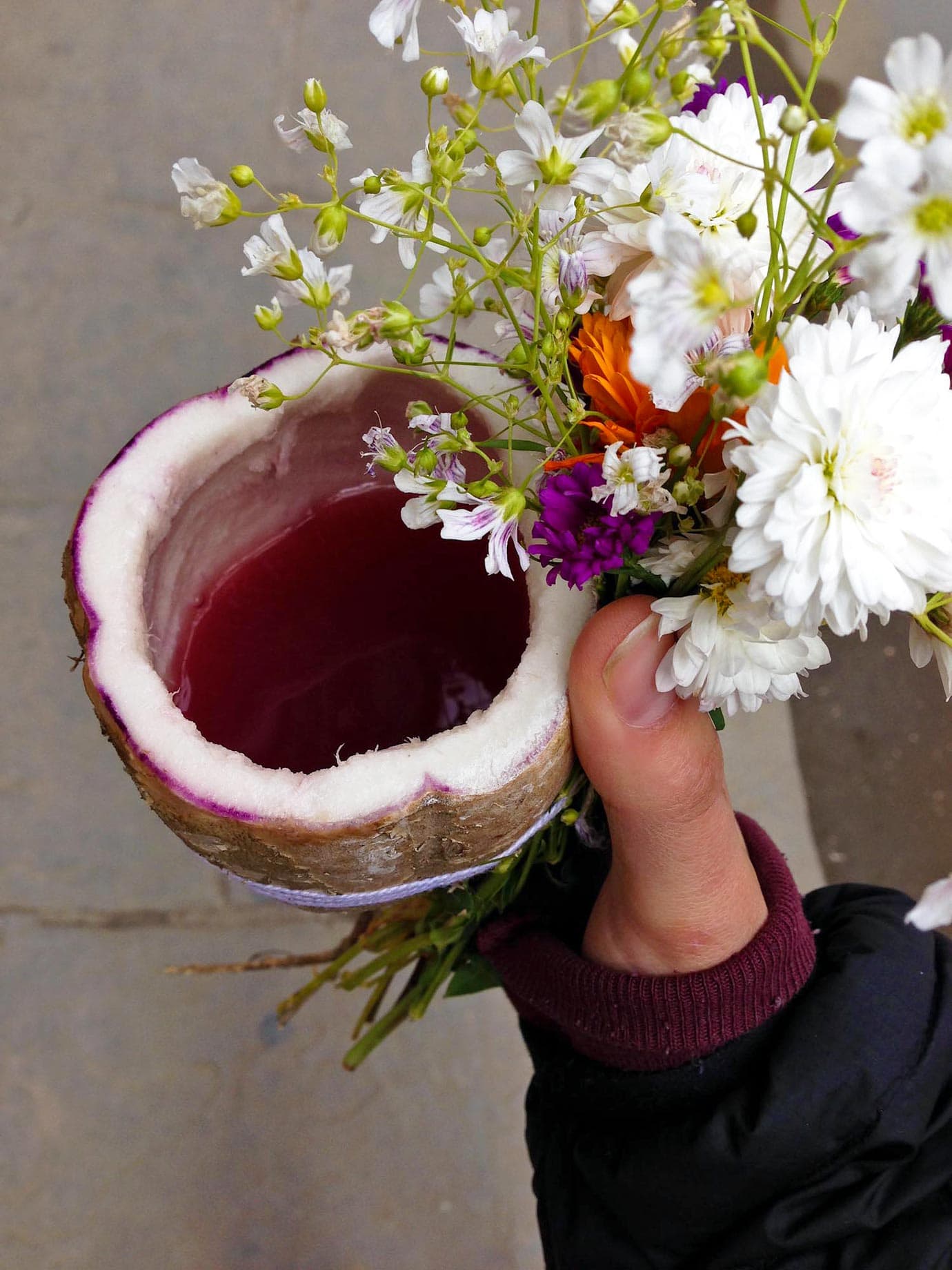 Speaking of sweet, the Bolivians love sugar. They have dulce de leche on their toast in the morning, always put sugar in their coffee or tea, and sweet treats galore are sold on every street as a late afternoon snack; jello with whipped cream on top, helado (ice cream) or baked goods are all on the menu.

I have been trying everything I can, with varying degrees of success. I would be lying if I said I didn’t have a craving for good pizza or a White Spot veggie burger every now and then. It has been pretty amazing to try some of these ingredients prepared in such different ways than I’m used to. One of the reasons I wanted to stay in one place for an extended visit was to truly immerse myself in the culture and what better way to do that than eat with the locals.

To be honest I can't say I'm a huge fan of the food here. There are a few good dishes though. I've written my own opinionated article on my blog.

They certainly don't seem to have as much of a range of ingredients in Bolivia as in other places I've visited, but I was surprised by what they could accomplish from such simplicity.

There were some distinct Bolivian flavours I will never forget. It's amazing what you can do with so little!

Bolivian food is super tasty! You need to know what you get of course, it is also very easy to get insipid food out there. Thanks for sharing Brianna!

We love Bolivian food! Take us back!