Seeing Qaqortoq through the eyes of the Brit

From the moment of flying into Nuuk to exploring the abandoned settlement of Kangeq to hiking in the middle of nowhere, the one thing I immediately came to learn about Greenland was that it was without a doubt the most beautiful country I’ve ever stepped foot on. Period.

However, it was only on board the Arctic Umiaq Line cruising from Nuuk all the way down to Qaqortoq that I truly came to appreciate that fact. 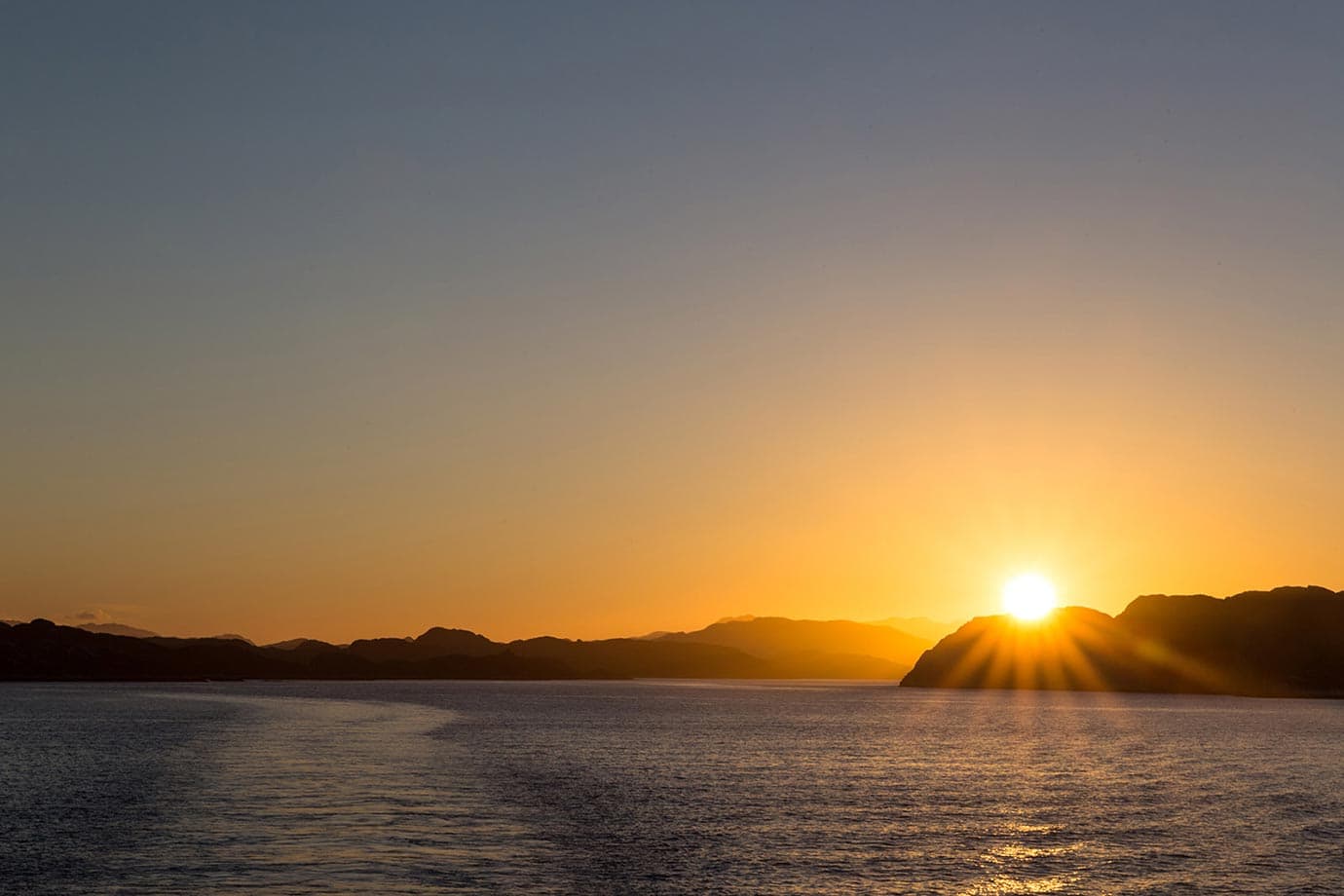 The Arctic Umiaq Line travels all the way from Nuuk to Qaqortoq in the south stopping at a number of small towns and fishing villages, and being on board you really get a sense of what life is like along the coast.

Saying that, the journey takes nearly two days and there’s really not much to do on board, so you’ve got to find some way to entertain yourself. 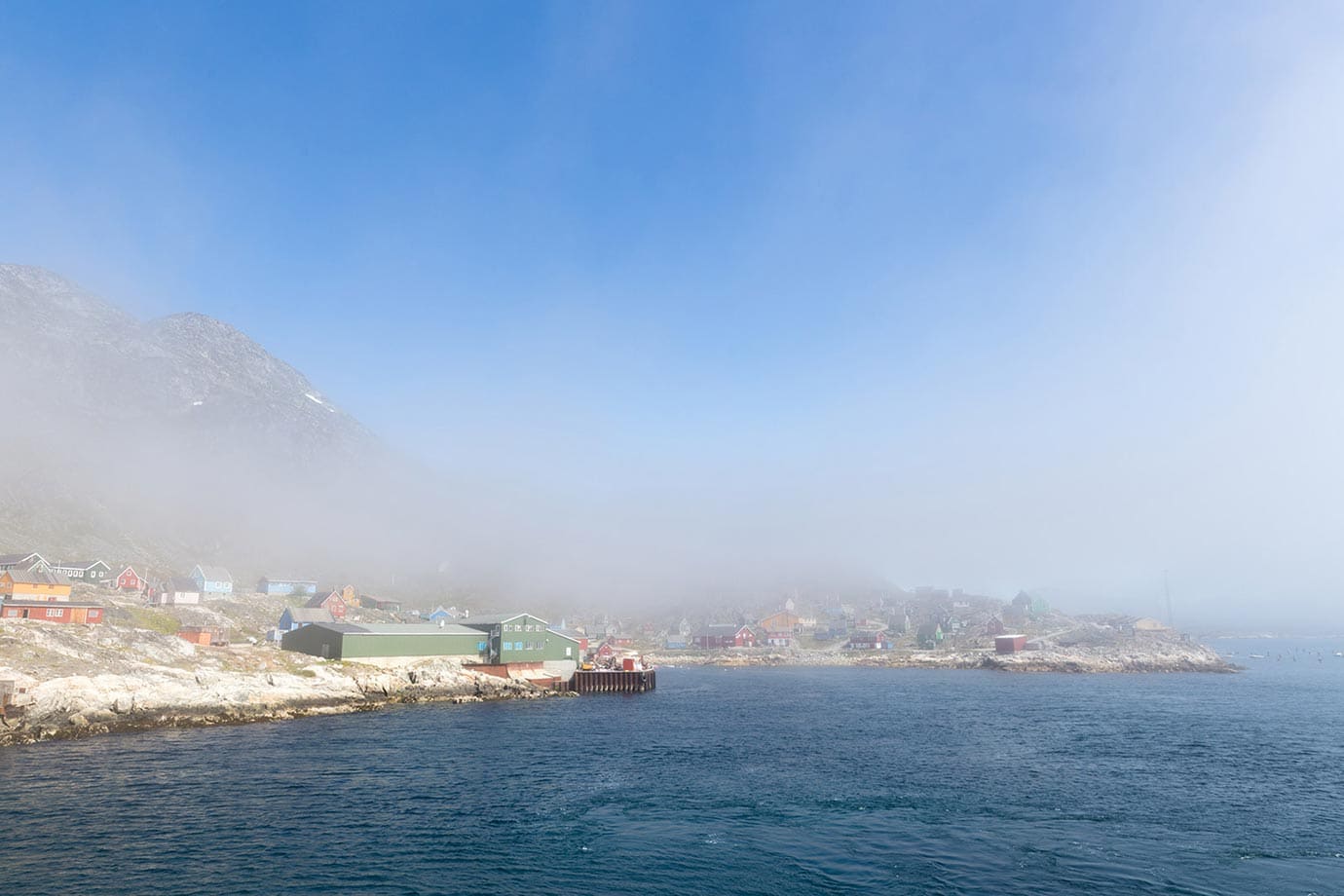 Okay, so there’s a cinema room playing a few films from the 50s, but they were all in black and white and in Greenlandic, so as far as entertainment goes they weren’t exactly blockbusters (to us anyway!). Then there was the canteen – the provided entertainment twice a day, but there’s only so long you can look at a reindeer casserole before it gets a little dull. 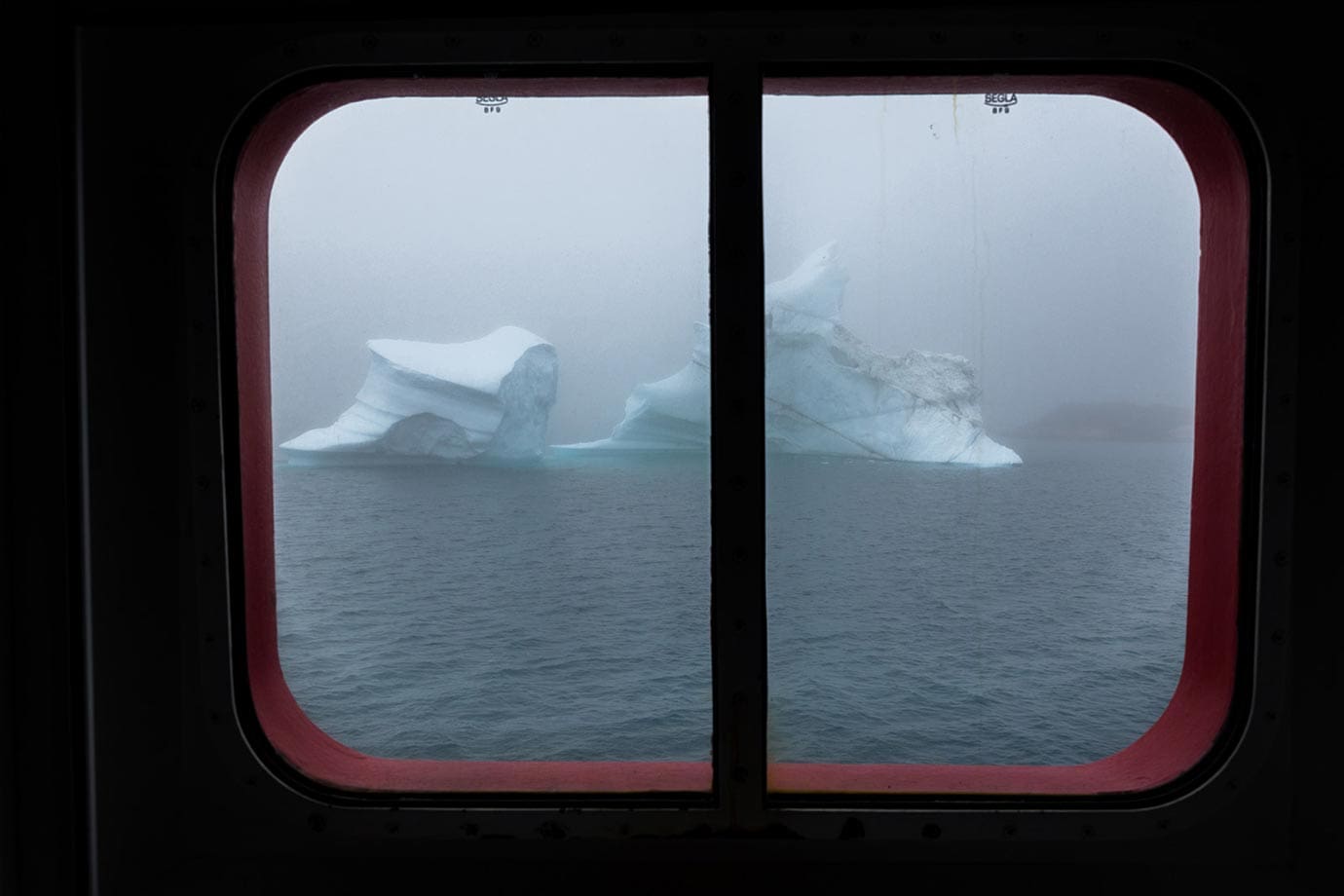 The thing is, when you’re on a boat with nothing to do for two days, it gives you a chance to look out the window and to think. And with icebergs lazily drifting past your window and some of the most astounding landscapes you’ve ever seen, things start to make a lot of sense.

You’d think things would get tedious and boring after two days on the water with nothing to do, but that’s the true beauty of Greenland. You really don’t need any form of entertainment to be overawed.

How could you be when you’re in a place such as this? 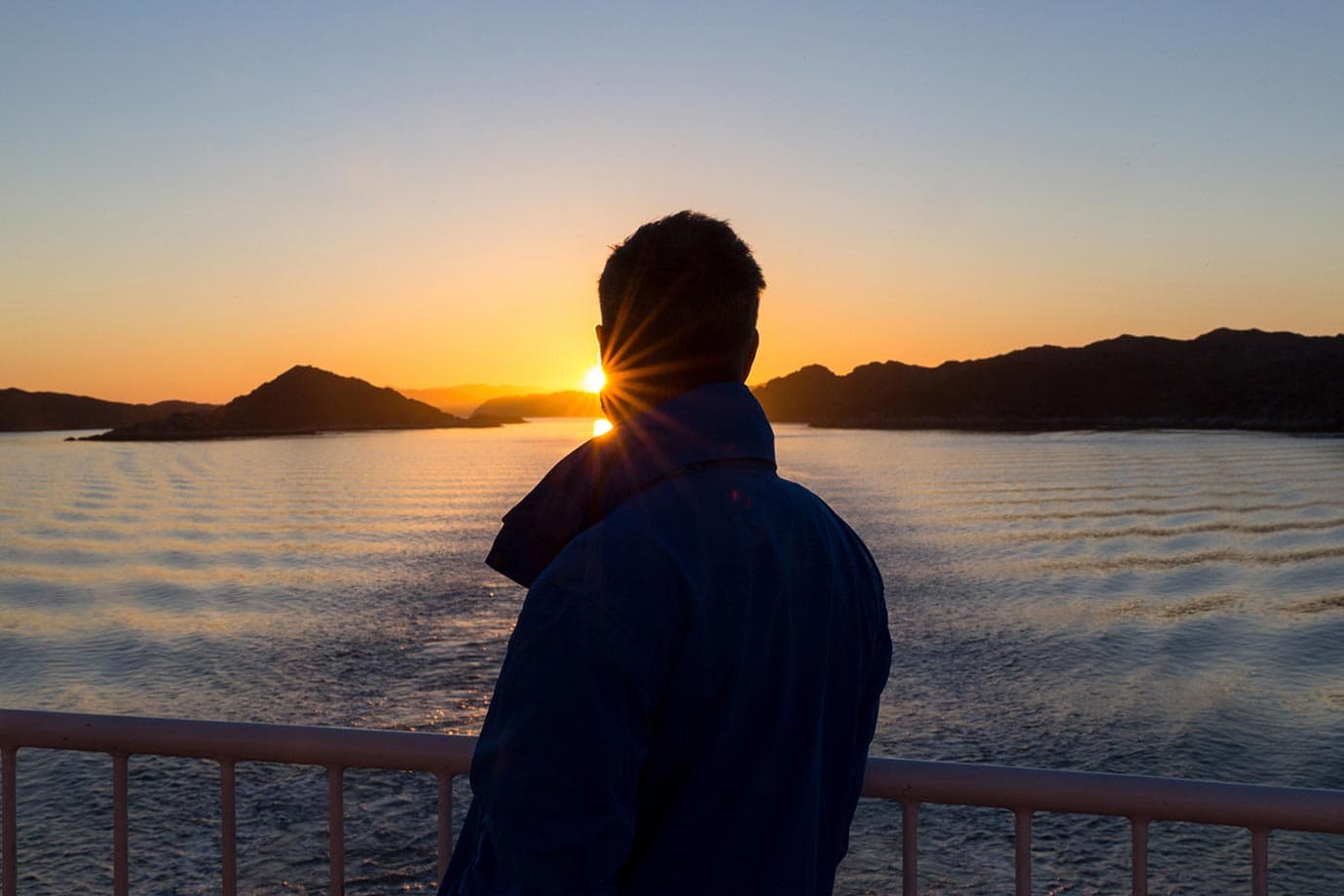 We arrived in the small town of Qaqortoq in southern Greenland on the dot of midnight, and for the first time on our trip we arrived in complete darkness.

To add to the mystery of the place, the town was carpeted in a thick fog, the street lights barely visible.

It was at that time of night that we had our tour around the town. That took all of 10 minutes. 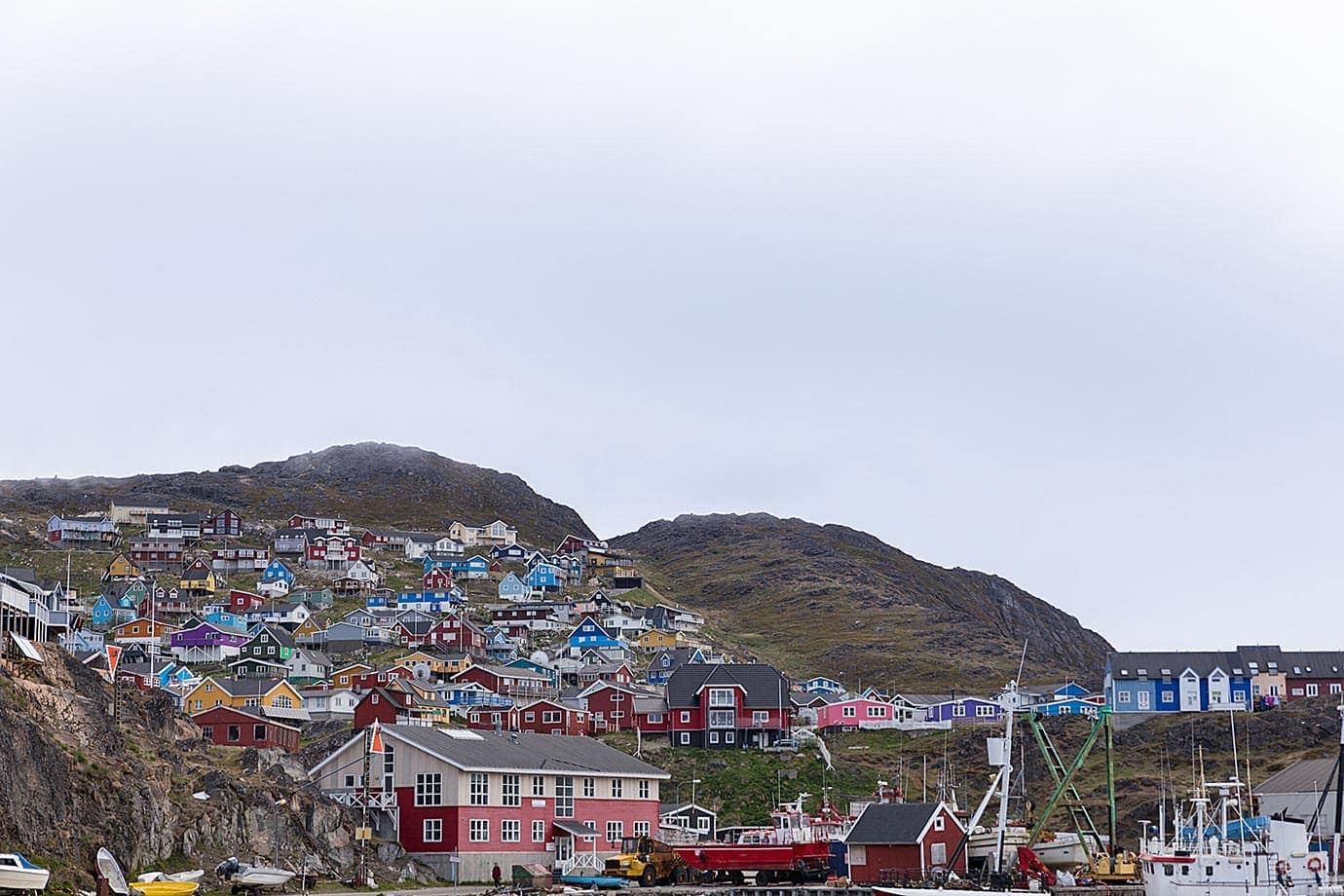 One of the reasons we were in Qaqortoq was to visit the hot springs, the only one in Greenland and hotly tipped as one of the top things to do in the country.

Well, I can honestly say that never in all my life had I been to a place so isolated from anything, and so naturally beautiful too. 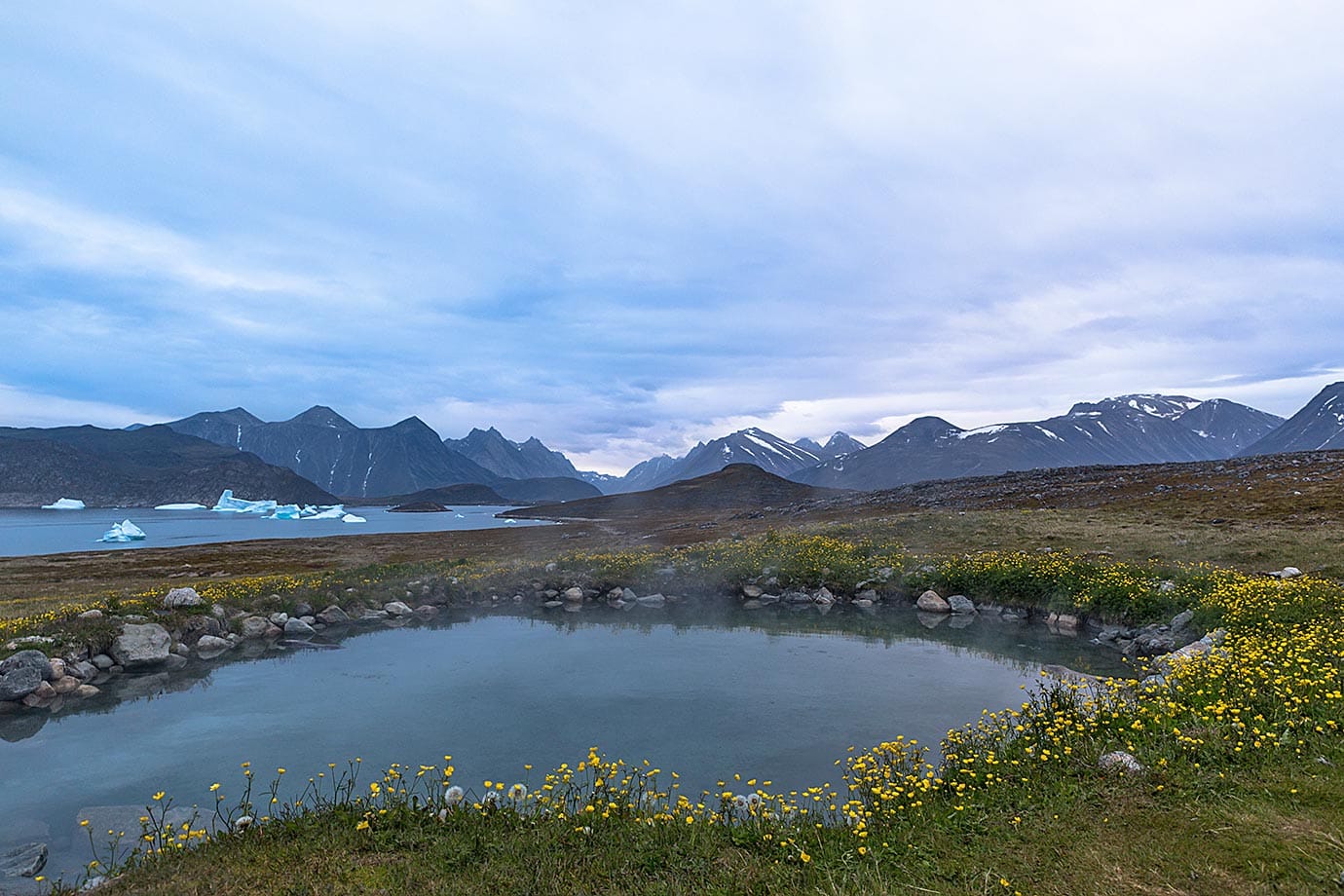 An hour’s boat ride from Qaqortoq through the icebergs, the journey almost feels as if you’re going back to a time forgot.

To get to the hot springs you have to pass through a channel with huge mountains either side and some of the biggest icebergs we’d come across yet. To add to the beauty of the place, there’s even a beach there.

Seriously, it’s hard to describe the raw beauty of this place. Hopefully our episode on Qaqortoq can do it some justice. 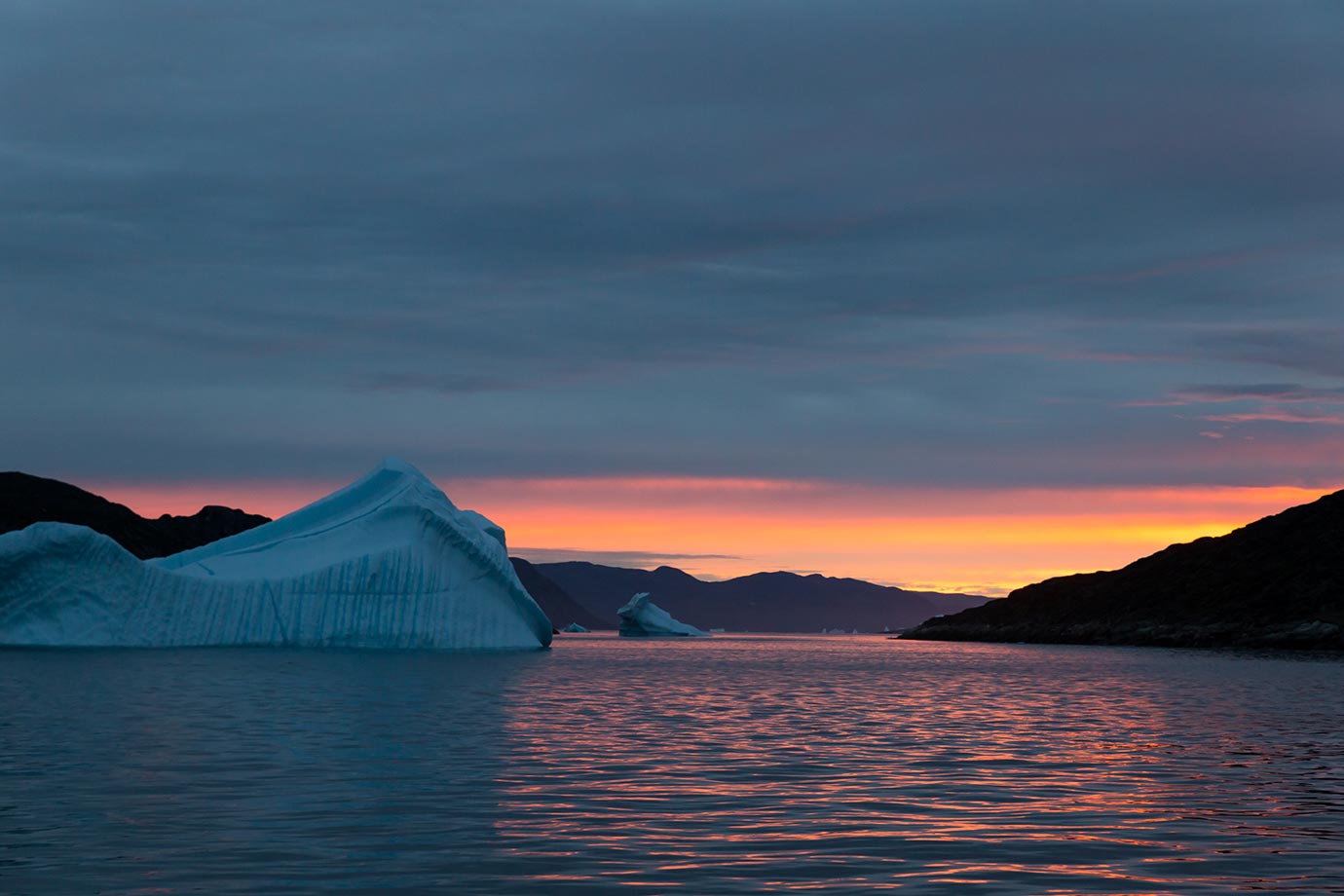 Travelling from Nuuk to Qaqortoq and stopping off at all the little fishing villages along the coast gave us an opportunity to see what life’s really like in Greenland, and from the smiling faces of families greeting loved ones to the sun setting over the mountains with icebergs dotted all around, no matter where I looked I couldn’t help but see the beauty of the country.

It may have been something I first thought in Nuuk, but it was only once we got to Qaqortoq that I had it confirmed – this really is the most beautiful country in the world.

Seeing Qaqortoq through the eyes of the Broad

36 hours on a boat is not my idea of a good time so when we decided to take the Arctic Line from Nuuk to Qaqortoq, I have to admit I hadn’t starred it on my itinerary.

Arriving to the dock, we were met by the boats guide Mattias who would be looking after us on our ride. He showed us to our cabins, and to my surprise and great pleasure, they looked quite roomy.

The sun was shining as we set off on our journey, so we had to get out on the deck. Bundled in jackets and sunglasses, snacks and our own little bar in tow, we settled in for the ride. 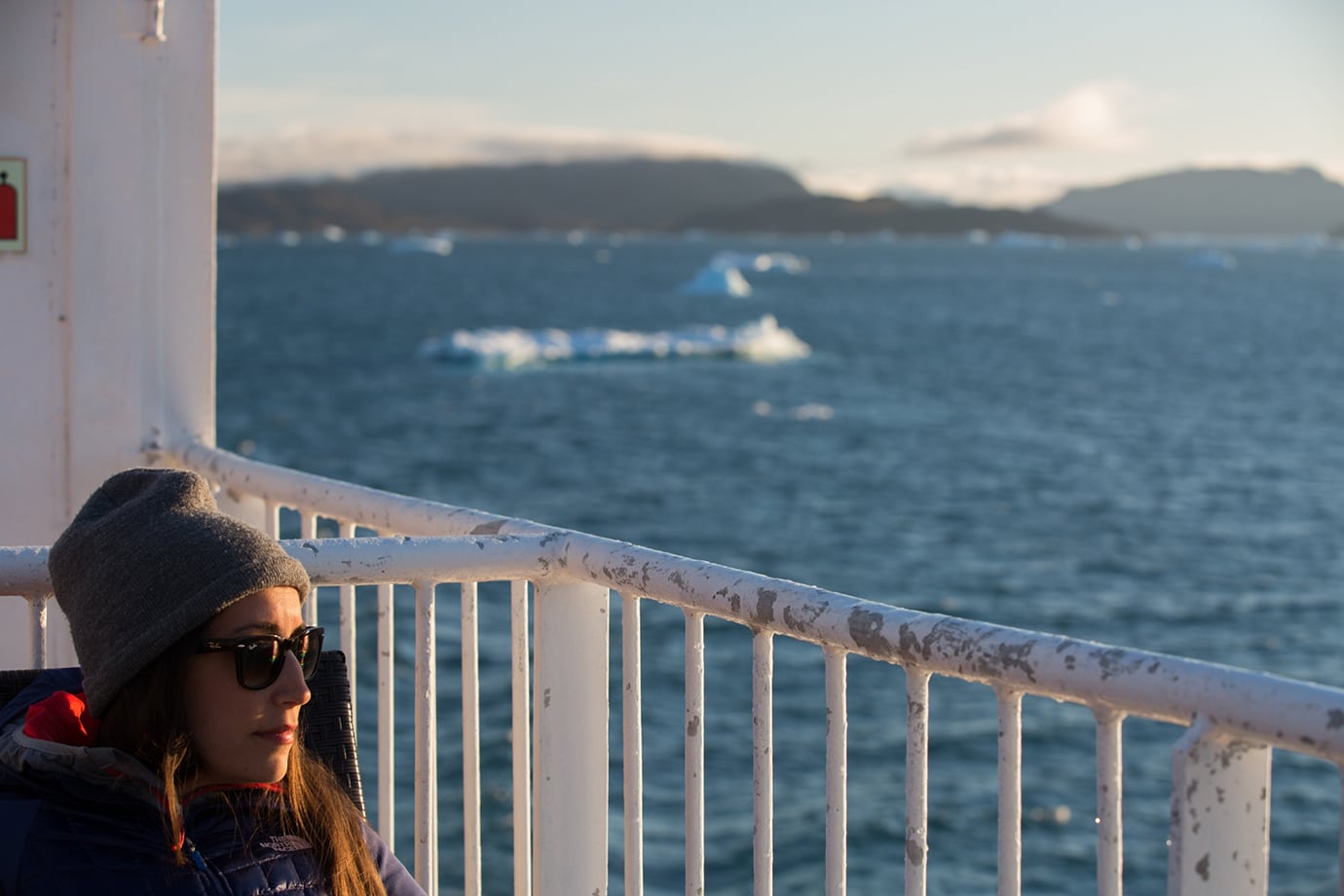 I was immediately in love. Feeling the sun on my face, watching a never ending landscape of mountains in the background and rolling hills in the foreground I was completely in awe. We sat out there for a few hours, just the three of us, flabbergasted by how lucky we were to be in such a beautiful place before the cool Arctic breeze got the better of me and I had to go inside to warm up.

It was a very peaceful ride. With not much to do other than watch the landscape and play cards, it felt quite meditative.

Going from Nuuk, the capital of Greenland, to Qaqortoq was quite a leap. Nuuk had already felt like a small “big” city (population just under 17,000) so arriving in the fourth largest town on the island and finding that the population was only about 3,000 felt even smaller.

But like Nuuk, there’s a community warmth and skirts through the winding streets. The city is built on high hill tops and I could imagine it would be quite a trick to navigate the steep hills in the dead of winter. 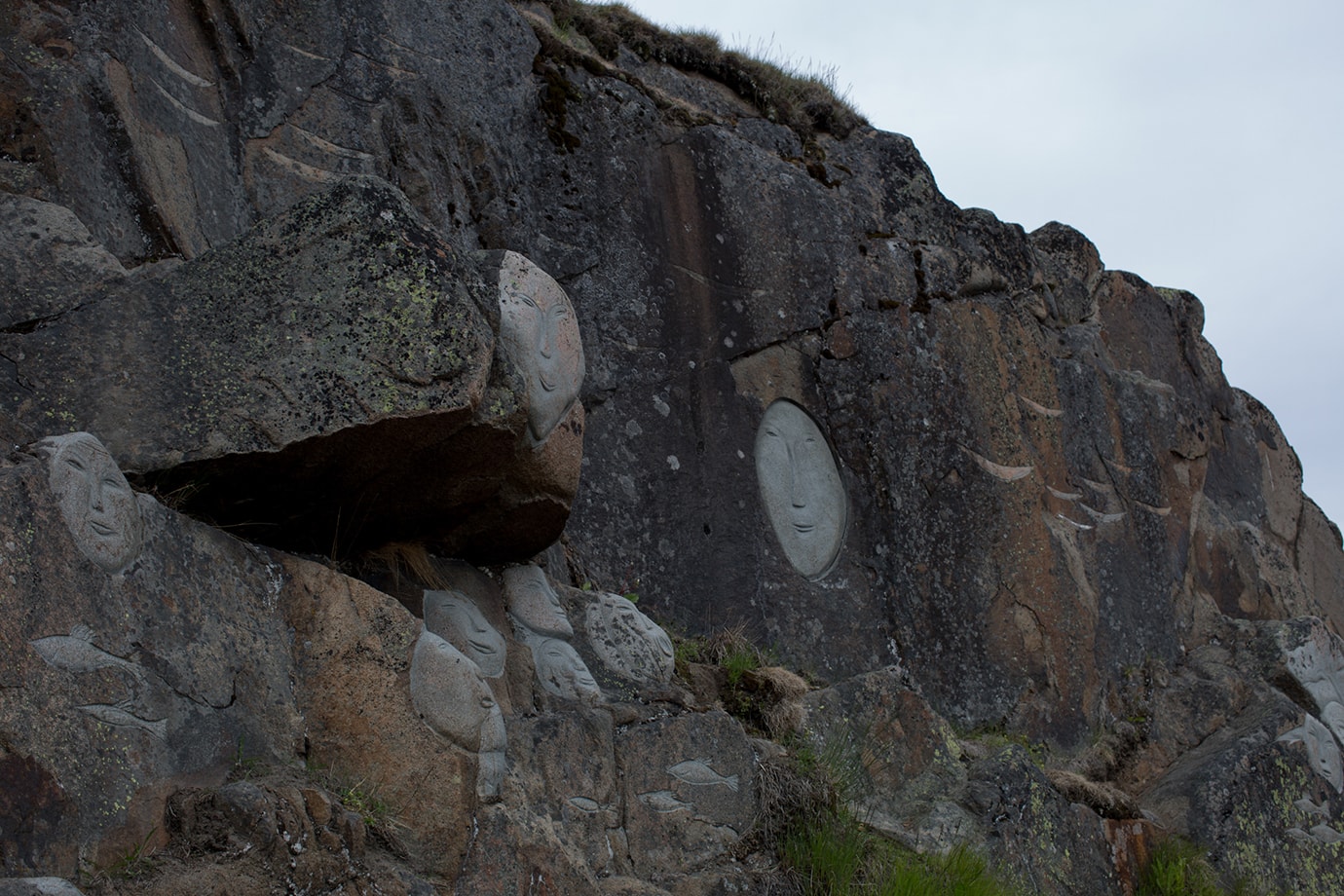 We had a guide, Ivik, show us around the town. We visited the museum there that is filled with local handicrafts, artwork and some very cool photography from the past.

The town also has one of the coolest “open air galleries”, being home to over 40 rock carvings hidden throughout, as part of the Stone & Man exhibit. This exhibit began in 1993 by local artist Aka Hoegh, who invited artists from across Scandinavia to transform rocky hillsides into pieces of art. 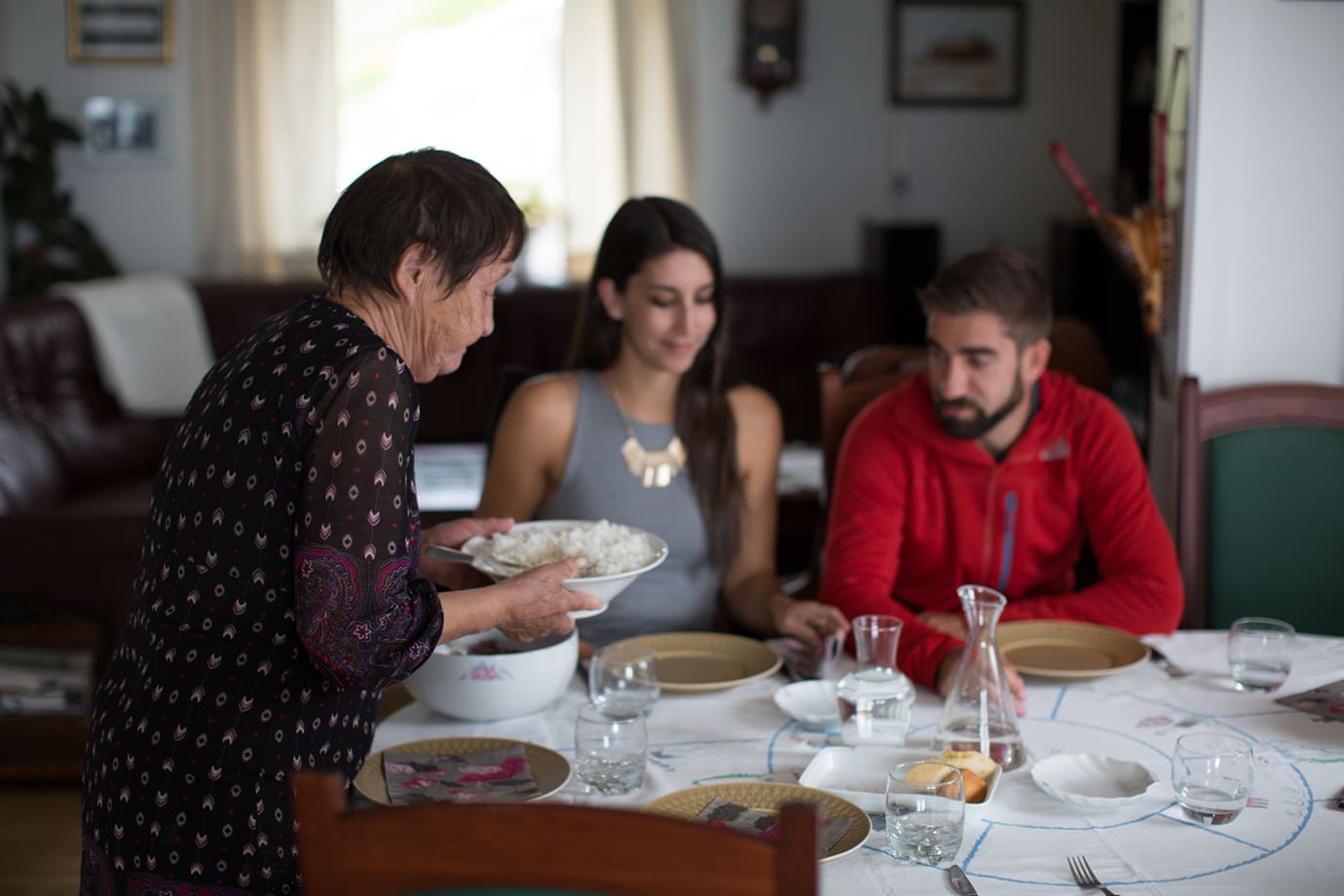 We were also invited to a traditional Qaqortoq meal in the home of the sweet local Sophie, who has lived there her whole life. We feasted on cod and reindeer stew before heading out to visit the local hot springs we had heard so much about. 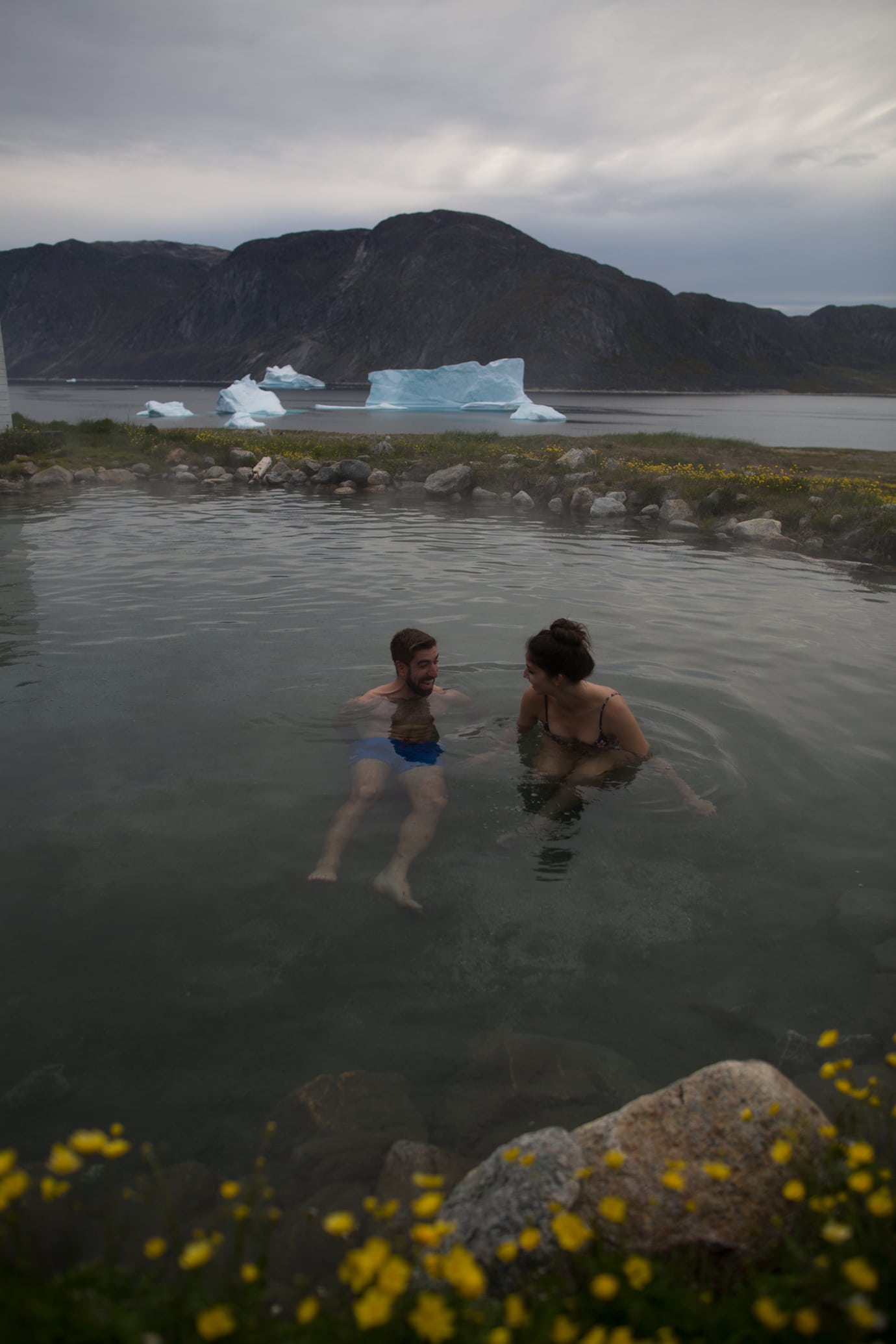 I think we all had to pinch ourselves when we arrived but we were too cold so we just jumped in the warm pool overlooking the ocean. Secluded, quiet and incredibly peaceful, this spot was one of my favourites on the trip.

It’s a beautiful boat ride to get there and well worth the hour trip. Coming home, we glided across the water getting just a peek of a pink, red and orange sunset.

Luckily, we were bundled up in the cabin of the boat but had to run out on the deck to snap some photos. The rhythmic bumps of the boat ride were like a gentle lullaby as we pulled back into town, refreshed and at peace.

Make sure you watch our full episode GREENLAND – Travel in Qaqortoq, Greenland to see what it’s really like to travel there!

What an incredible experience for you guys. Greenland is one place we're dying to visit! Love the video as well, you guys are pushing boundaries and we love it!

Thank you so much! That means so much and we really appreciate it! Greenland really is a once in a lifetime place to visit and we can't recommend it highly enough! Hopefully you get to go there one day!